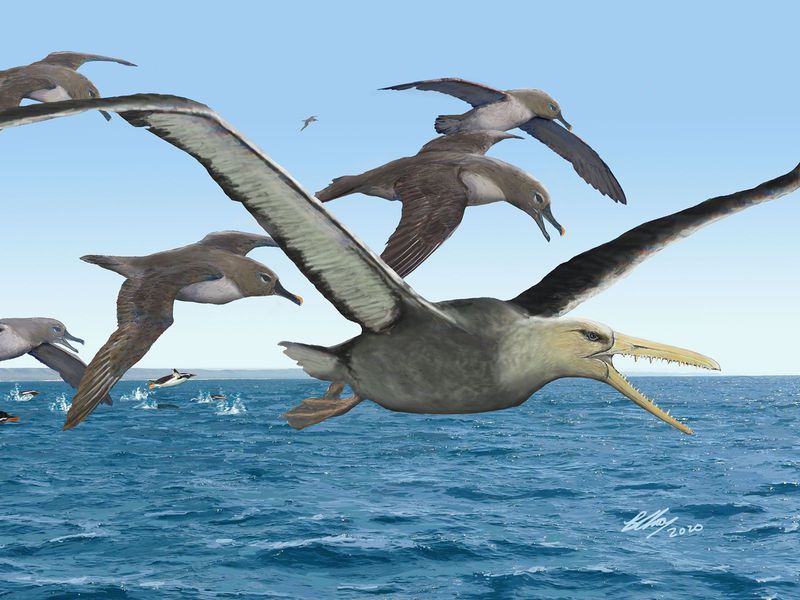 Pelagornithids are a group of ancient avians that can be described as the largest flying birds of all time. These humongous birds had a wingspan of 20 feet, and were capable of soaring across seas. Paleontologists were able to identify the birds’ capabilities by comparing a pair of remains of related birds, as the Smithsonian Magazine details:

During the 1980s, University of California Berkeley paleontologist Peter Kloess says, scientists searching for Antarctic fossils found some delicate bird bones—a jaw and part of a foot from an ancient bird—on Seymour Island. Those bones then made a long journey to California, but their story was only just starting.

The jaw and foot bone were just two of a huge collection kept at the University of California Riverside. In 2003, however, the more than 10,000 fossils of the Riverside collection were transferred to the University of California Museum of Paleontology at the Berkeley campus, the bird bones among them. And they stood out. “Bony-toothed jaws are rare in the vertebrate record,” senior museum scientist Pat Holroyd says. “When you see one, you remember it and mentally file it away for later.”

The bird jaw, which came from a rock formation laid down over 37 million years ago, looks almost like a woodcutting tool rather than a bone. The jaw has a series of large and small spikes, outgrowths of the beak that have a passing resemblance to teeth. On a living animal, the points would have been covered in keratin and given the bird a sinister saw-toothed smile. That feature immediately identified the jaw as belonging to a pelagornithid, also known as bony-toothed birds that have a very long fossil record. The oldest pelagornithids evolved about 56 million years ago, and the most recent flew through the skies about two million years ago. Their fossils are found all over the world.

Image via the Smithsonian Magazine

Rating This May Be The Largest Flying Bird Ever is 5.0 / 5 Votes: 2
Please wait...
Loading...
Related articles