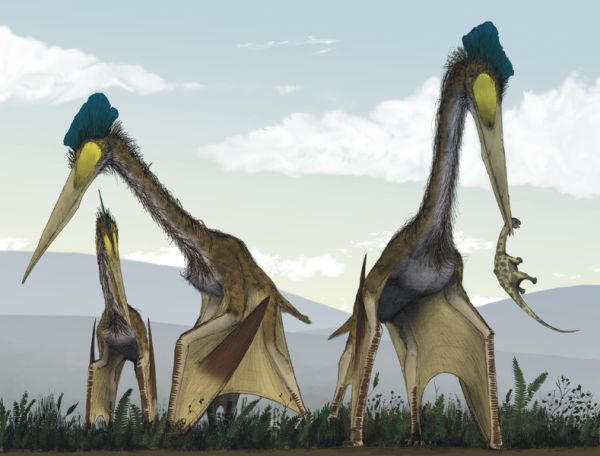 Pterosaurs have always seemed like an anomaly among ancient reptiles. They were huge- the azhdarchid pterosaur had a wingspan of up to eight meters (26 feet), plus it had a long neck and long beak. How does such a big animal fly and carry prey large enough to feed on?

To learn more about their bones, researchers examined the internal structure of a well-preserved azhdarchid pterosaur vertebra; it was nearly 100 million years old, and had been found in the Kem Kem beds, a fossil-rich region near the border of Morocco and Algeria. Using x-ray computed tomography and 3D modeling, the scientists found the vertebra was filled with dozens of 1-millimeter-thick spikes, called trabeculae, crossing each other like the spokes of a bicycle wheel in cross section, and forming a helix along the bone. The spokes surrounded a central tube where the animal’s spinal cord would have been. “We just could not believe it,” says Cariad Williams, a paleontologist at University of Illinois, Urbana-Champaign, who first looked at the scans. “We have never seen anything like it before. … It was really impressive.”

To test whether the spokes provided extra support to the bones, the researchers did some mathematical modeling. They found that as few as 50 trabeculae almost doubled the vertebra’s ability to carry weight, they report today in iScience. The researchers also calculated that the neck of their specimen could lift prey weighing between 9 and 11 kilograms, roughly the size of a large turkey. “It’s a real feat of biological engineering,” Ibrahim says.

Read more about the research at Science magazine. -via Damn Interesting