Christmas is approaching with all its absolutely unique moments – a Christmas tree, festive lights, and thus a completely childlike expectation of magic that distinguishes only this holiday. And indeed, not a single day of the year is associated with so many totally incredible stories that are so hard to believe, but are in fact completely real.

There is a special subgenre of romantic Christmas comedies with roughly the same plots which, at any other time of the year, can seem silly and far-fetched, but not on Christmas Eve! Moreover, in this magical time, it seems that reality itself changes, showing us that the most implausible stories come true.

For example, something similar recently happened to Shyla Watson, a Los Angeles journalist who writes about books and strategy. Shyla shared the story in a series of tweets that went completely viral, garnering in total over 150K likes and nearly 6K retweets. And what is most interesting, in the comments, people tell their own versions of how this tale should develop further… 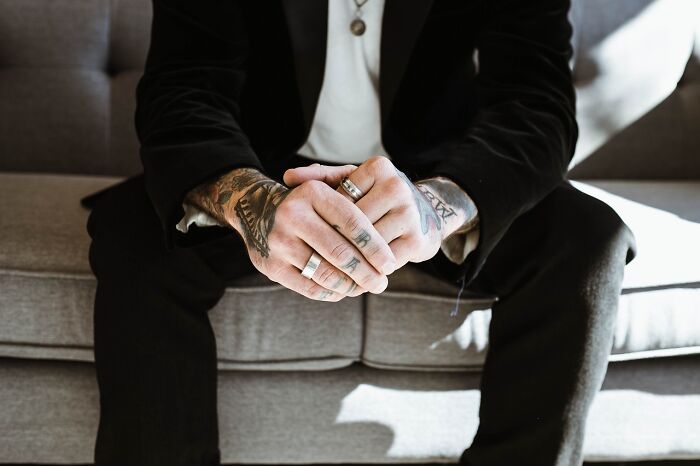 So, plot twist now. Shyla had brought home her Christmas tree and was now unsuccessfully trying to get it off the top of her car. The Christmas tree was big and heavy, so the author of the post had already managed to make more than one unsuccessful attempt to wrangle it. Usually in romantic comedies, just at that moment, a nice guy comes up to the heroine and offers his help… 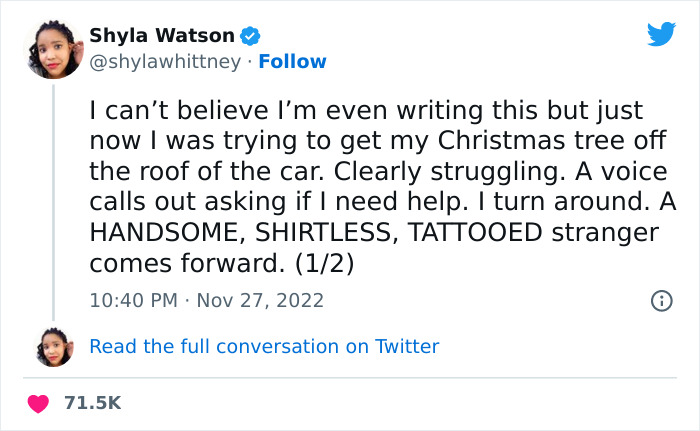 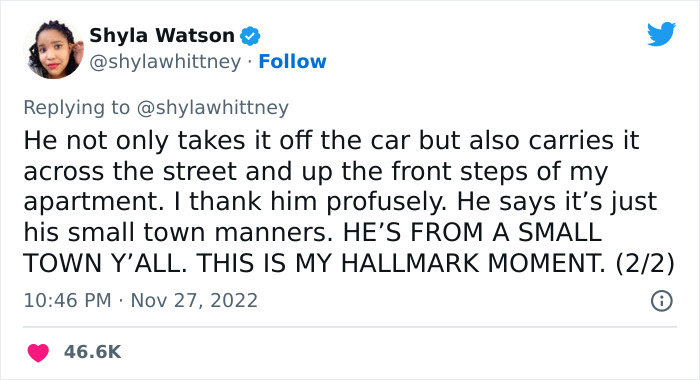 And what do you think happened? Yes, damn it, Shyla heard a voice behind her, turned around – and saw a handsome, shirtless and tattooed man coming towards her. As a result, the stranger not only removed the Christmas tree from the roof of the car, but also carried it right to the porch of the Original Poster’s house. In response to Shyla’s thanks, the guy modestly explained that it’s just his small town manners. 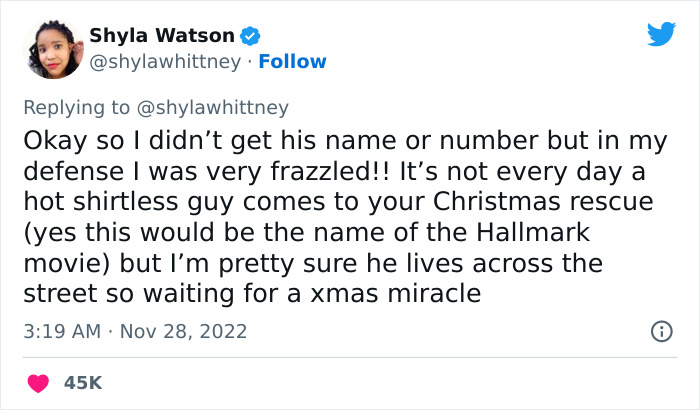 Shyla admits that at that moment she was so frazzled that she didn’t even think to ask the stranger for his phone number (yes, in the best traditions of Christmas comedies). However, she is sure that he lives somewhere nearby, and that they will still be destined to meet in order for this ‘Christmas Rescue’ (which is what the OP thinks her Hallmark movie will be called) to continue. 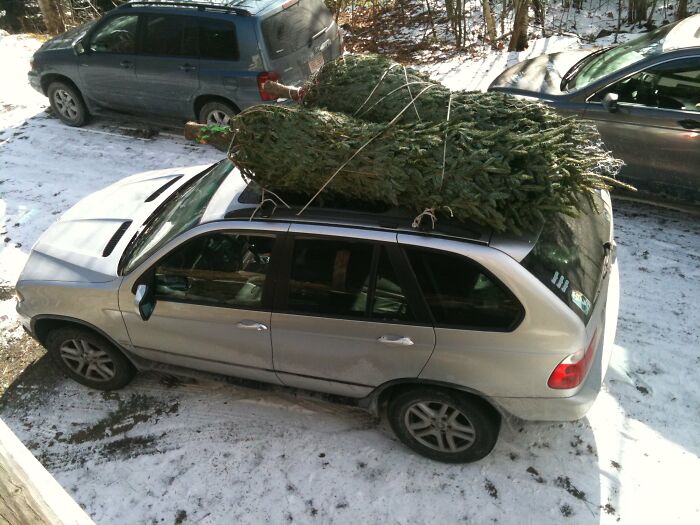 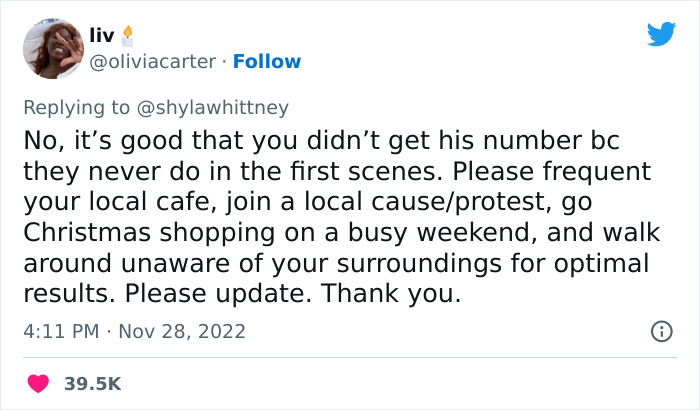 We must say that very soon a lot of experts on Christmas comedies appeared in the comments, and they vied with each other to give Shyla advice on how to proceed. For example, she now has to visit a local cafe, join a local cause or protest or go Christmas shopping on a busy weekend – in general, doing about the same thing as the heroines of our favorite romantic movies. 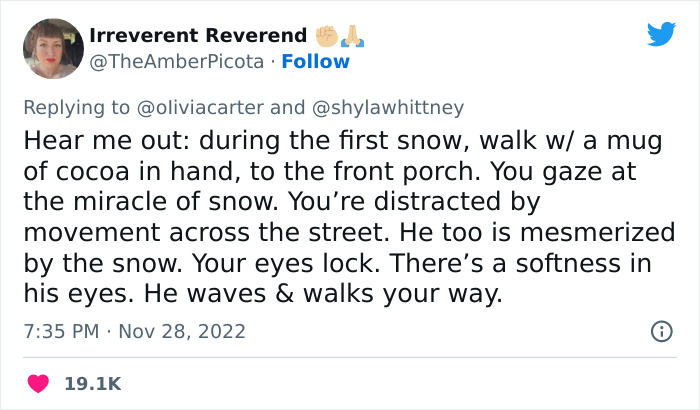 Among other popular tips was the idea of walking the dog around the neighborhood several times a day, and if a dog is not available, then borrow one for a few days from friends or acquaintances. Or, who the hell are we kidding, just walk a pigeon. In the end, in this case, it is not the reason that matters, only the process is important. 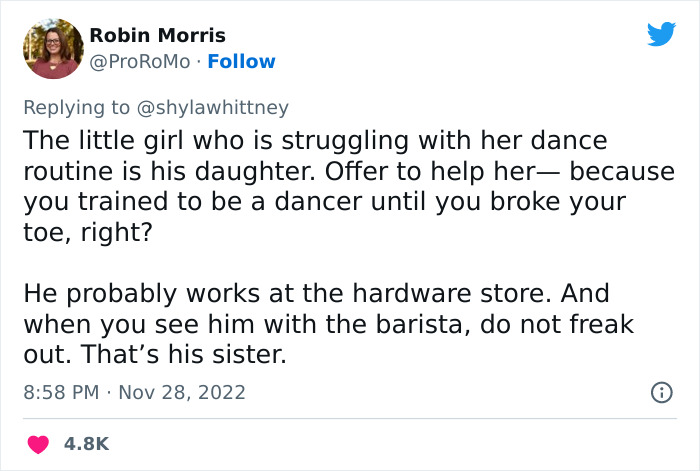 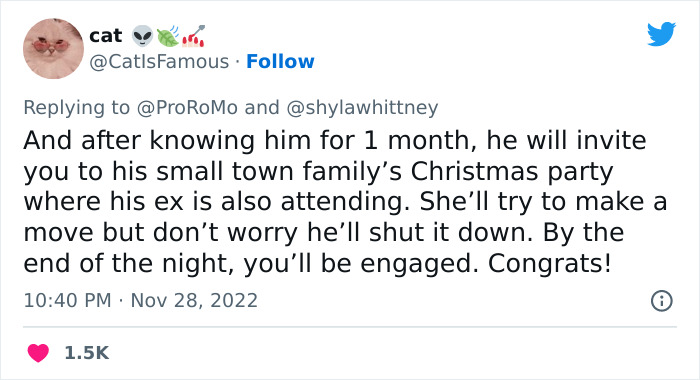 Another smart and witty idea on how to meet the guy Shyla liked again is to get another bulky thing in her car and struggle to get it out, so he’ll definitely appear once more. And at this point, the OP will simply have to say something like: “We need to stop meeting like this!” 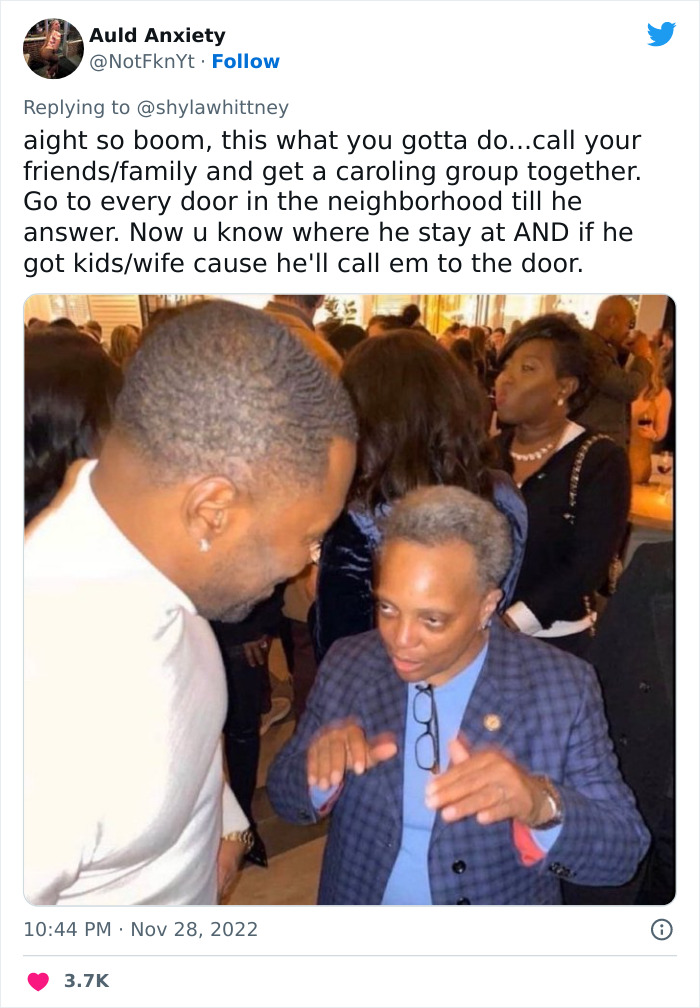 People in the comments appreciated the idea of always carrying a mug of hot chocolate with her. After all, next time he will definitely be in a beautiful warm sweater with deer embroidery (although then his tattoos will not be visible and Shyla may not recognize him), and then she will have to spill her chocolate on this sweater. 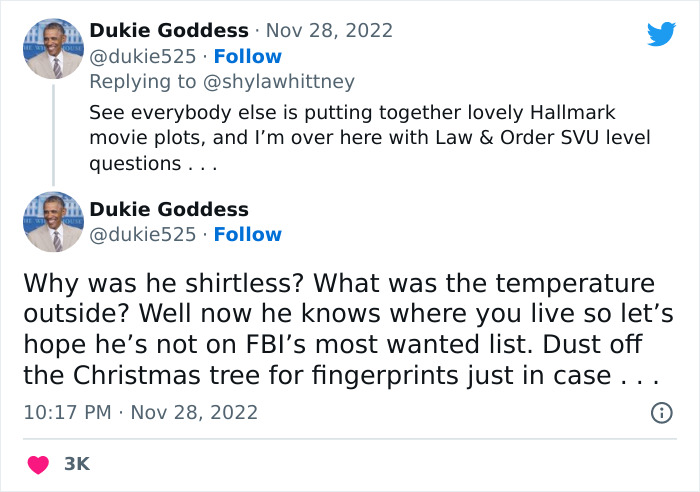 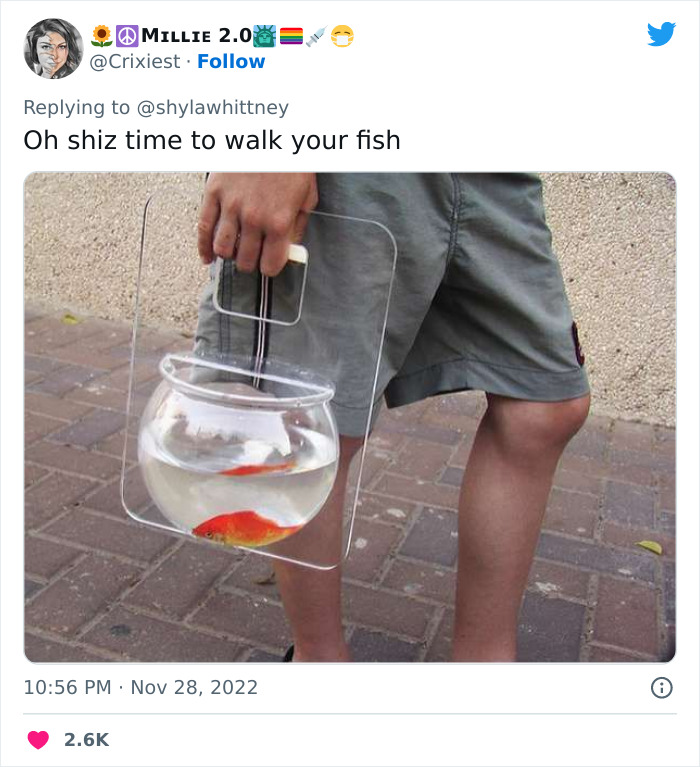 In case the author came to town to close her local family-owned Christmas ornament factory, that’s very bad news for her, commenters suppose

By the way, people in the comments asked if Shyla planned to close the local family-owned Christmas ornament factory. Because if she came to town for that very reason, then the guy she met definitely inherited this factory from his grandparents, in which case that’s very bad news for the Original Poster… 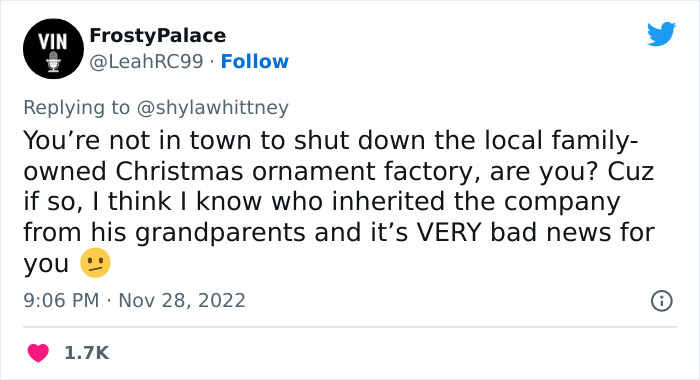 And another curious plot twist for this story: at Christmas celebration, our heroine will see that guy with his boyfriend, and she’s so devastated that she swears off men. But the next day she runs into him at Starbucks and he asks her out. She’s absolutely confused until his equally attractive twin brother comes up and says: “Hello!” And then she melts. The end. 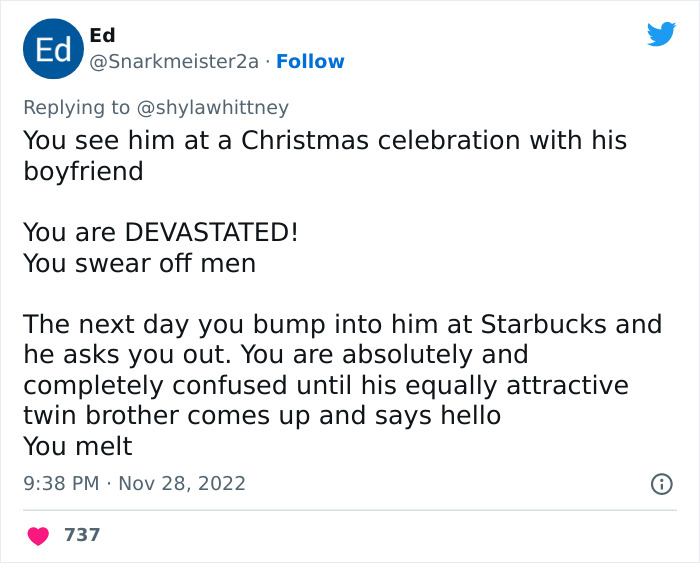 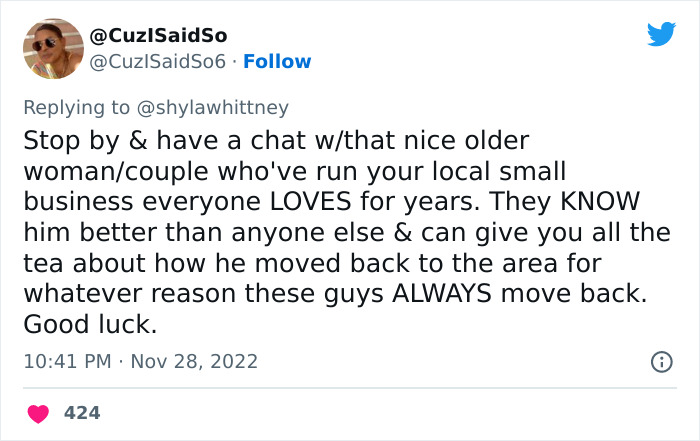 Just agree that after such a happy ending, we absolutely don’t want to write anything, and we’re talking about Hallmark here, not Marvel, but still, we will allow ourselves one scene after the credits. So now, please feel free to write your comments with your own plot ideas for this story, and then we can definitely write: “Handsome tattooed shirtless guy will return.”

The post This Woman Has A Real-Life Hallmark Movie Moment, And Folks Online Are Enjoying It first appeared on Bored Panda.