For two years, employers have been waiting for “the day” when everyone returns to the office. And now, companies expect workers to collectively go back to the land of the cubicles, briefcases, and packed lunches with a smile. But for many of us who relished our commute-free lifestyle, it has become clear that we can be just as productive while wearing PJs and tracksuits to which, let’s face it, we have all adapted way too well.

The work-from-home culture has benefitted countless employees, and TikToker Sammy Jay knows this from personal experience. In her video series titled ‘Back In The Actual Office,’ the content creator shares hilarious insights from her new reality that range from painfully funny interactions with coworkers to AC wars that leave people no choice but to lunge into battle.

In her recent clip, she explained that the corporate welcomed her return by sending employees a ridiculous email titled “21 Reasons Why We’re Glad To Be Back in the Office.” So Sammy decided to humor her followers by reading some of these so-called perks aloud, and to all currently desk-bound souls out there, let me tell you, this story — you can relate. Scroll down to read all about the email, as well as some of the responses, and be sure to share your thoughts in the comments!

As many employers welcome their employees back to work, one company sent out an email about the benefits of returning to the office 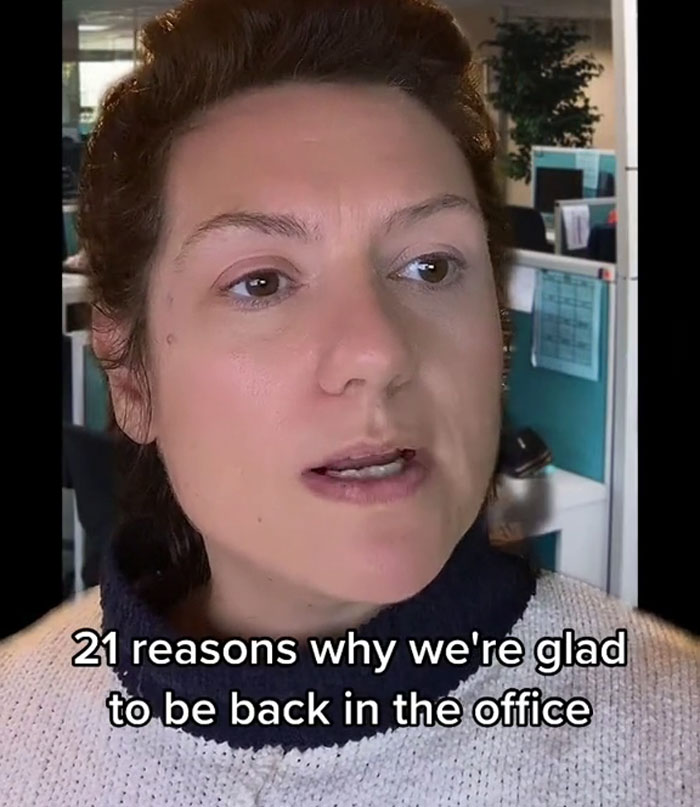 So recently, TikToker Sammy Jay decided to roast these so-called perks by reading them out loud 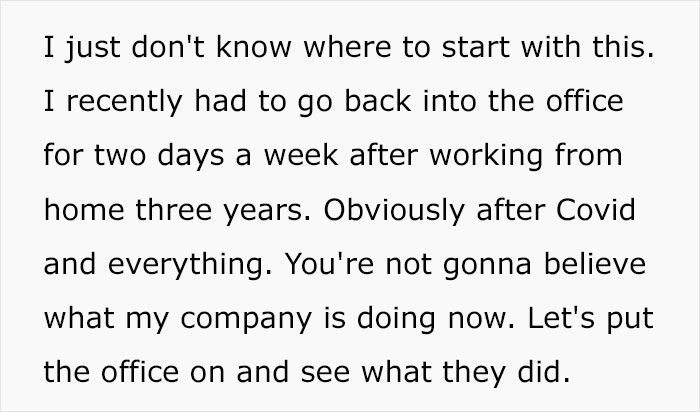 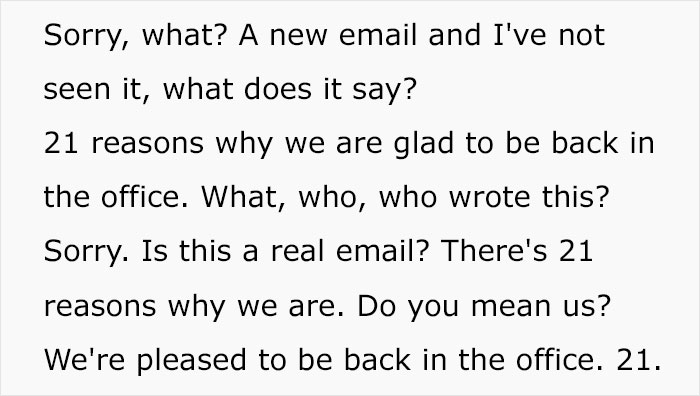 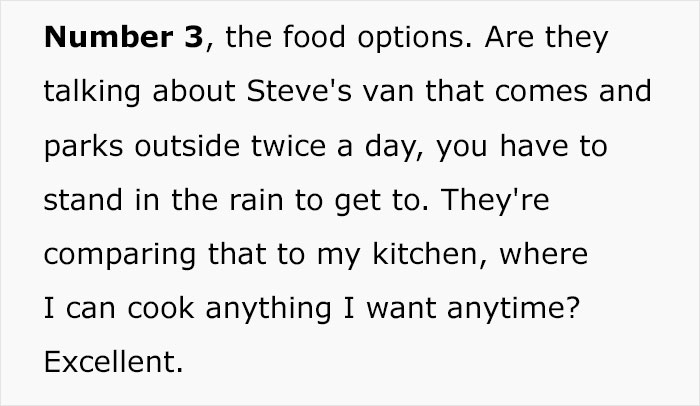 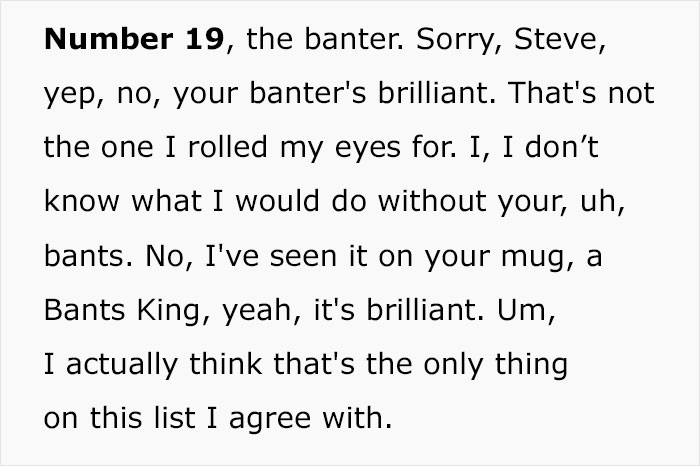 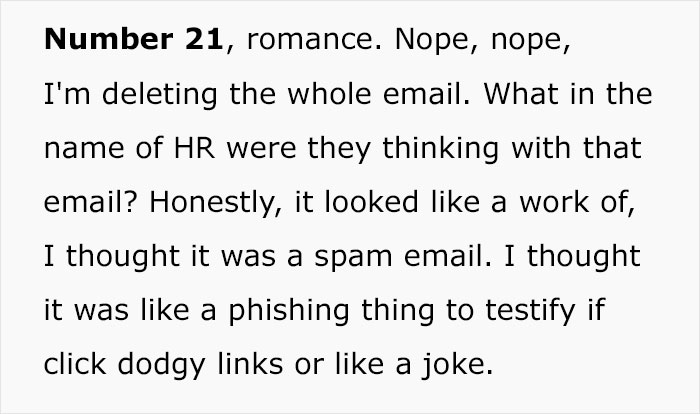 Sammy’s satirical approach to the email was greeted with a big round of applause by her followers. In response to the video, some users pointed out that the corporate is trying to gaslight employees and others chimed in with their own insights and personal stories. The content resonated deeply with people because, as Sammy said to the camera, “nobody is choosing a bra and shoes if they don’t have to,” and she has a point.

A 2021 study by the Future Forum, Slack’s research consortium, found that once employees tasted the benefits of remote jobs, flexible work practices got deeply ingrained and valued in their everyday life. In fact, 76% of employees want flexibility in where they work, and 93% want flexibility when they work. Moreover, when employees report low satisfaction with flexibility on the job, 71% are open to new opportunities.

To gain more insight on companies urging workers to return to in-person work, we reached out to Sunny Patel, a UK-based career-change coach aiming to help professionals find careers that excite them. According to him, asking employees to get back to the office full-time already seems like a thing of the past. “Many jobs can be done from home, so the feeling of having to commit X amount of time, five days a week, just to go and do the same job, does seem outdated,” he told Bored Panda in an email.

Another reason why employees see working in the office as a serious downside for their job is because we’re starting to replace human-to-human interaction with digital interaction, Patel argued. “A physical workplace requires us to use skills that (for many people) are on the decline. We don’t work that muscle enough, so it can feel difficult when we need to.”

Unfortunately, some companies use the office model as a power tool to control and closely monitor their employees. “This is concerning, but not surprising,” Patel explained. “Many leaders on LinkedIn are openly sharing their concerns/rants about how people need to get back into the office and ‘back to work’. Their belief that true work can only occur in the workplace is so engrained that they can happily share such posts, without a thought that there might be another way to look at it.”

“It’s essentially just presenteeism, which in the UK especially, is still a big thing,” the coach continued. “In addition, some organizations don’t have trust in their leadership and/or their approach to measuring staff performance. Such workplaces need more dated approaches to monitor staff, which often amounts to little more than watching them more closely.”

You can watch Sammy’s video series, where she shares her experience of going back to the office, right here

@sammyjaydon I used to do this every day! Why is the office so hard now? #neurodivergent #theoffice #wfh #stationery ♬ original sound – Sammy Jay

But it turns out that a more flexible work environment is also beneficial for the employer, as it often leads to increased productivity and retention rates. Patel agreed that people now understand the benefits of remote work and expect a better symbiosis (not just balance) between their work and their life.

“I spoke to someone recently who is happier in her job now, than in the previous five years she spent in the same role,” Patel shared. “All her employer did was sit down with her and understand how the role could better fit her life as a parent of three.”

“This resulted in her working slightly shorter days twice a week, working from home once a week and possibly more during school holidays. Her performance reviews show she’s performing better than ever, in fewer hours, purely because she feels more valued and has designed a schedule that she knows can work with her other commitments.”

If you feel unsatisfied with coming to the workplace full-time, a few days a week, or even at all, career coach Patel suggested that honesty is the only way to handle the situation. “When I was a manager, I disliked nothing more than when staff simply acted up or were regularly frustrated without explaining why.”

“I had a staff member come to me once and ask for some more flex over their working pattern,” he added. It was a simple human-to-human conversation and we were able to solve it easily. This also strengthened our relationship, and going forward, I checked in with them regularly to see how their child was doing, which they really appreciated.”

“We’re moving towards becoming a species that wants to avoid conflict and difficult conversations, but these things strengthen us and serve to ensure that all parties in a relationship can better understand each other. Asking for something like this when you’re new to the role might not make sense, but the right time will never be far away,” Patel concluded. 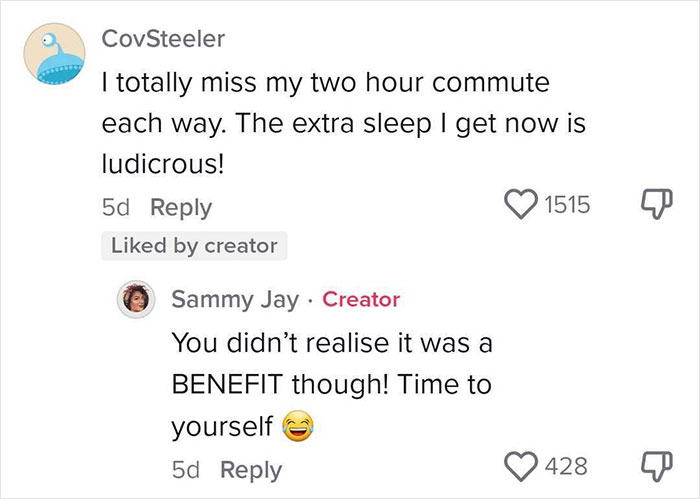 The post Tiktoker Roasts Tone-Deaf Email Where Employer Lists Reasons Why They Should Be Glad To Be Back In The Office, Goes Viral first appeared on Bored Panda.