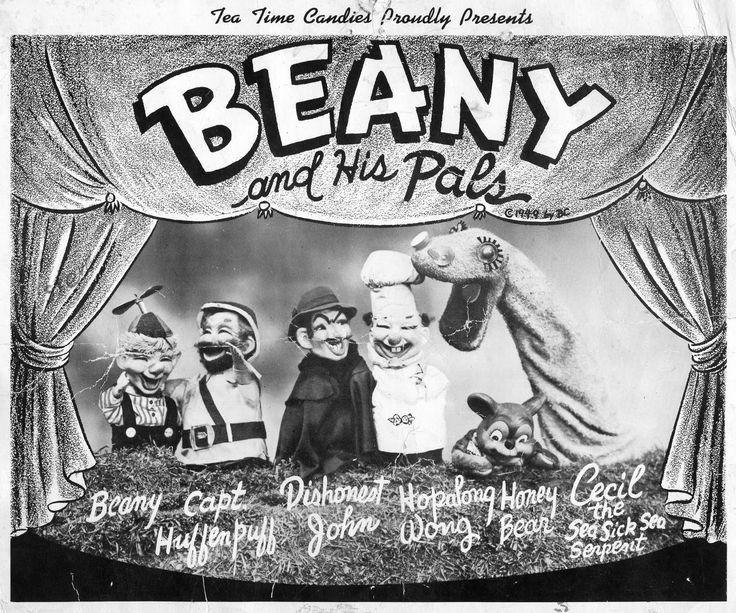 You may or may not have ever heard of Robert Clampett, who died in 1984, but his is one of the most interesting stories in the history of animation. He got his start at the Leon Schlesinger Studios (later bought out by Warner Brothers), where he worked under the supervision of legendary cartoon director Tex Avery. He soon became a cartoon director himself for Warner Brothers, where he turned out some of the best cartoons ever made, such as this and this.

After leaving Warner Brothers in the late 40’s, he struck out on his own, as he had his own ideas and had tired of the corporate culture. Teaming up with a couple of then-luminaries in the world of humorous entertainment, in 1949 he began producing a TV series called Time for Beany, which was a live-action puppet show. From the IMDb:

Unbelievably, this show was done live 5 times a week for 6 years, from 1949 to 1955. Stan Freberg and Daws Butler played, respectively, Cecil and Beany, and it was produced by Bob Clampett, with all 3 sharing writing credits. It was about the adventures of a boy and his seasick sea serpent, and was a hit almost from the first episode.

That said, it doesn’t for a moment convey the incredible inventiveness and hilarious insanity that went on during the show, and behind the scenes. They frequently ad-libbed, especially when they couldn’t find the scripts.

The “Time for Beany” live show eventually became “Beany and Cecil”, the animated cartoon that all us baby boomers loved in the early 60’s. But the animation could never, no matter how much we loved it, surpass these live shows.

How popular was Time for Beany? From the IMDb:

It was rumored that Albert Einstein liked it so much, he stopped work every day to watch. He was addressing a group of Nobel prize winners in 1950, and stopped abruptly, telling his audience he had to leave since it was “Time for Beany”. Groucho Marx of the Marx Brothers wrote that it was the only show adult enough for his young daughter Melinda to watch. In fact, Groucho even made “Time For Beany” references on his own popular early television program, “You Bet Your Life”.

Actor Jimmy Stewart pleaded with Paramount not to change the show’s air time so that he would not be forced to miss it. When actor Lionel Barrymore worked on the MGM set, studio head Louis B. Mayer forbade television sets on the lot because he felt they were a threat to the motion picture industry. So, Barrymore was forced to send his chauffeur to a local bar to watch “Time For Beany” and return to report on the plot developments in the puppet show when he wasn’t able to see it himself because of the shooting schedule.

YouTube has numerous episodes and commentaries and several are embedded below. Note that the DVD box set contains some rather incredible commentary by the creators that cannot be found anywhere else.