Due to a few highly-publicized incidents, there are people who are convinced that electric cars, due to those pesky lithium-ion batteries pose a greater fire risk than gasoline-powered ones. For the record, the NHTSA concluded in this 2017 report (PDF) that electric car fire risks “are anticipated to be somewhat comparable to or perhaps slightly less than those for gasoline or diesel vehicular fuels.”

Nevertheless, Germany road safety organization DEKRA, which conducts their own testing, submitted two tiny electric cars to some particularly brutal crash tests. “The speeds were far beyond those that are common in standard crash tests,” the company writes. An example:

That’s a Nissan Leaf hitting a pole sideways at 75 KPH (about 47 MPH). It’s pretty obvious that the driver in that situation would not survive–” But that applies to every type of car, regardless of the type of [engine],” the researchers write.

So why conduct the test?

“The damage patterns from the crash tests are comparable to those on conventionally powered vehicles,” says DEKRA accident researcher Markus Egelhaaf. “The high-voltage system of the electric vehicles was shut down reliably during the crash. And despite massive deformation of the drive battery, there was no fire.”

DEKRA’s ultimate conclusion: “Our experiments confirm that there is no reason to be less confident in the electric vehicle than in the conventional car.” 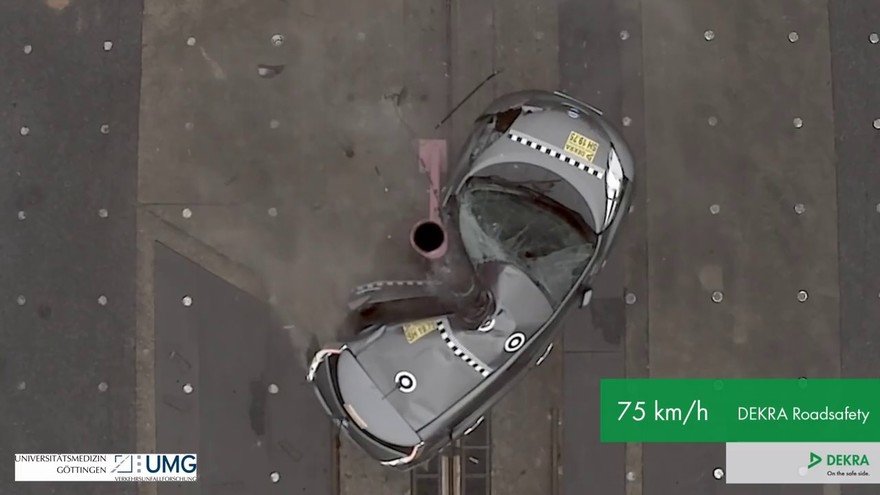 The other car tested was a similarly diminutive Renault Zoe.