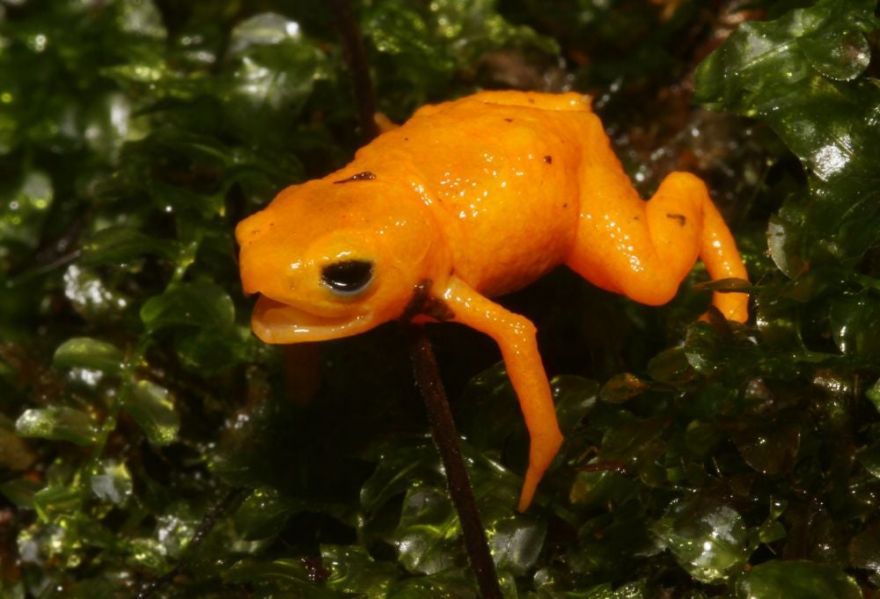 Yep, you’ve heard that right — it’s a toadlet. A small frog. Surprisingly, the actual scientific term for the newly-discovered tiny orange toadlet is toadlet. The B. rotenbergae is less than an inch long! The amphibian can be found in the Mantiqueira mountains in Brazil’s Atlantic Forest. Besides being small, did you know that its bones glow under UV light? Popular Science has more details:

This pumpkin toadlet looks almost identical to another species of pumpkin toadlet. If you were walking in the forest and came across one (they are difficult to spot, as they hide amongst the leaf litter), you almost certainly wouldn’t know this tiny frog from its cousin. But if you’re a herpetologist, like those that described the new species in a recent PLoS ONE article, you might have noticed the faded spots on its back that differentiate it from its cousin, Brachycephalus ephippium. The new toadlet, B. rotenbergae, is also a little smaller, though the two share fluorescent bones. It’s unclear what function the fluorescent bones serve, though they might have something to do with communication.