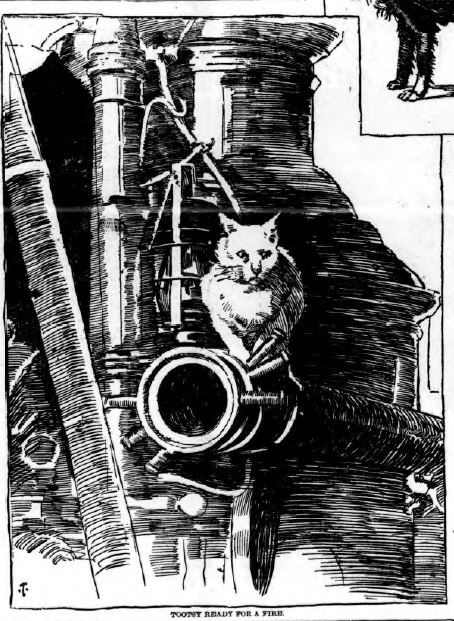 Firehouse cats are nothing new, as they are worth their weight in pest extermination and companionship. But Tootsy took her obligations to extreme, from her dedication to a fire horse named Old Babe, in whose stall she was born, to sliding down the fire pole as a regular mode of transportation. She sprang into action when an alarm went off, but was forbidden to ride along to an actual fire.

Tootsy was the beloved feline firefighter of Engine Company 27 on Franklin Street in Lower Manhattan. Born on the Fourth of July in 1895, Tootsy reportedly loved the smell of smoke as much as she treasured a fresh-caught mouse.

She was a genuine fire cat who loved riding on the fire engine, conversing with the firemen, and sleeping in her favorite horse’s harness. She was also quite beautiful, and drew much praise from the public and the press when she appeared in the National Cat Show at Madison Square Garden. According to the New York Press, the firemen adored Tootsy so much, they would have rather parted with their shields than lose their “white-fleeced feline fire fighter.”

Tootsy would have loved nothing more than responding to a real fire along with the firemen and the horses. She managed to do that, twice, despite the disapproval of her human overseers, when she was still a kitten. Read about Tootsy, the famous firefighting cat of Manhattan, at the Hatching Cat.  -via Strange Company