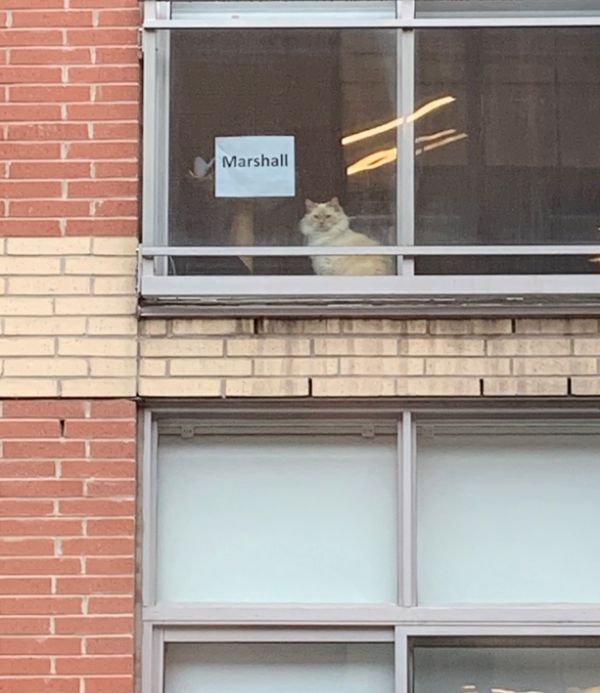 Erika Strong works at the office of Shopify in Toronto. Their office windows face an apartment building across the street, where cats sometimes sit in the windows. One cat was particularly intriguing to Strong and her co-workers. One day, they attached Post-it notes to their window that spelled out “What is your cat’s name?” And then waited. For six weeks. It was a glorious day on Wednesday when the sign you see above appeared.

“I died,” said Strong. “I freaked out. Everyone was so excited because they all knew we’d been waiting.”

People on other floors in the building who’d similarly admired the cat (which this reporter believes to be a ragdoll) even went so far as to thank her for finding out more about him.

Strong posted their accomplishment at Twitter, which went instantly viral.

Every day I stare out the window @shopify at a cat in someone’s apartment. Weeks ago @_myles and I asked what its name was. Today they obliged and weve never been happier. pic.twitter.com/NKkMN9ViD4

Now everyone in Toronto wants to know more about Marshall. You can read the entire story at blogTO. -via Buzzfeed

Dog Gets To Take Her Selfies In Her Own Photo Booth

A Rope Bridge For Gibbons

No Memory Is Ever Alone: A Photographer Reimagines Family Moments Using Her Dad’s Old Slides