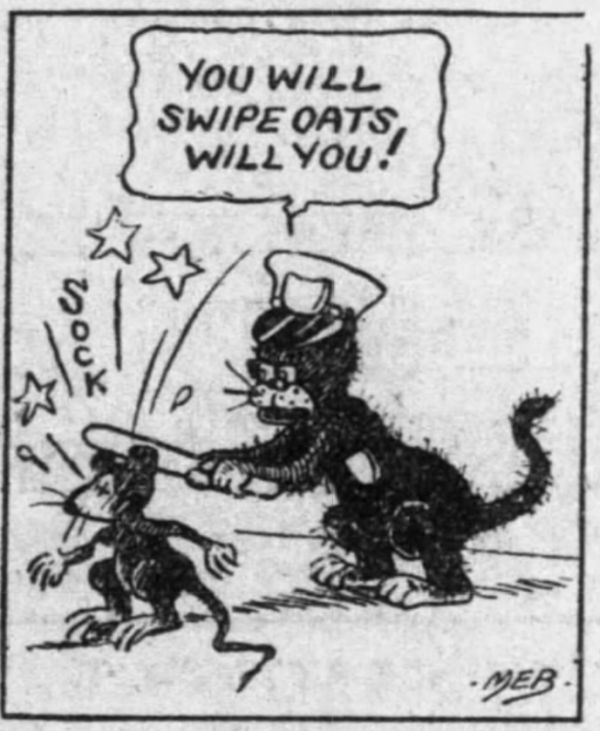 In 1916, the New York City borough of Queens consolidated all its mounted police into one precinct in Richmond Hill. That meant they needed a much larger stable, for up to 70 horses. One was located and rented from a dairy company. But a large stable with horses, hay, and horse feed soon became infested with rats and mice. The police needed a cat to keep the vermin under control.

Tramp, described as a big-headed, earnest-faced, blue-eyed cat, limped into the station house on Church Street in 1919. (By this time, the precinct was known as the 118th Precinct.) The poor cat was limping because his front paw had been badly crushed in an auto accident. Somehow, he knew he could help at the building with the green lights out front.

Detective Sergeant Albert Hill bandaged the cat’s limb and placed him on a little cot in the reserve room. Tramp reportedly purred, meowed, wagged his fuzzy tail, and threw grateful glances toward his cat-man hero.

While Tramp was bed-ridden, the officers couldn’t do enough to help him. They brought him food and pet him every day. Then they officially admitted him to their ranks–even going as far as giving him a collar that stated, “P.D. 118 Prct.”

On recovery, Tramp became a dedicated and hard-working officer. He also became somewhat of a star among local journalists, who lauded his talents and made up fanciful stories of his ambitions. Read about Tramp, the police cat of Queens at The Hatching Cat.  -via Strange Company