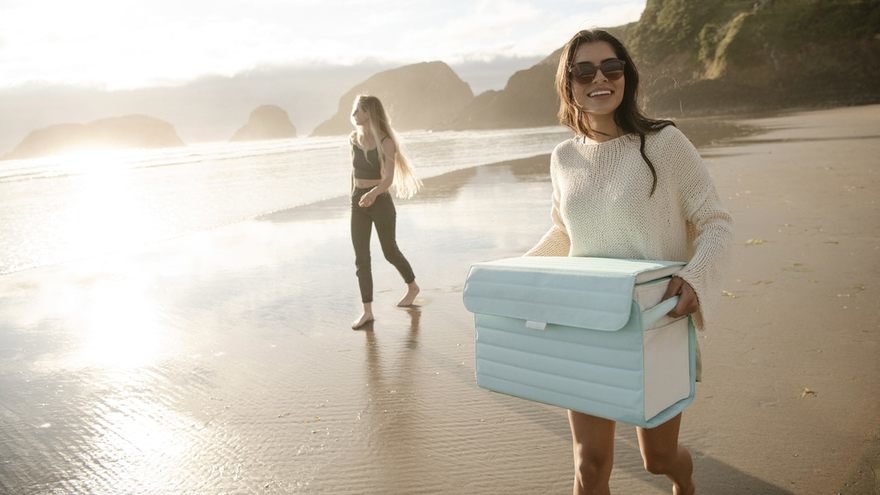 Mother nature often provides the best packaging design, from the humble, peelable banana to the durable coconut. That was certainly the thinking behind Nutshell Coolers, the first travel cooler produced from recycled coconut husks, available on Kickstarter until September 16. These sleek, bio-friendly containers were created by Stanford grads David Cutler and Tamara Mekler, whose work alongside small farmers and fisherfolk in the Philippines inspired them to craft packaging able to withstand the unrelenting sun while keeping the day’s catch cool and easily transportable, in the process contributing to the low-waste, circular economy.

A natural insulator, the coconut’s husk fibers are hollow with tiny pockets, allowing them to trap air and regulate temperature, making it an ideal substitute for plastic foam insulation. (In fact, under a microscope, Styrofoam and the cell structure of the coconut husk are almost identical.) Unlike traditional plastic coolers, the Nutshell pack can also fold to half its width and be frozen for more than 48 hours—allowing it be easily stashed away between outdoor adventures. 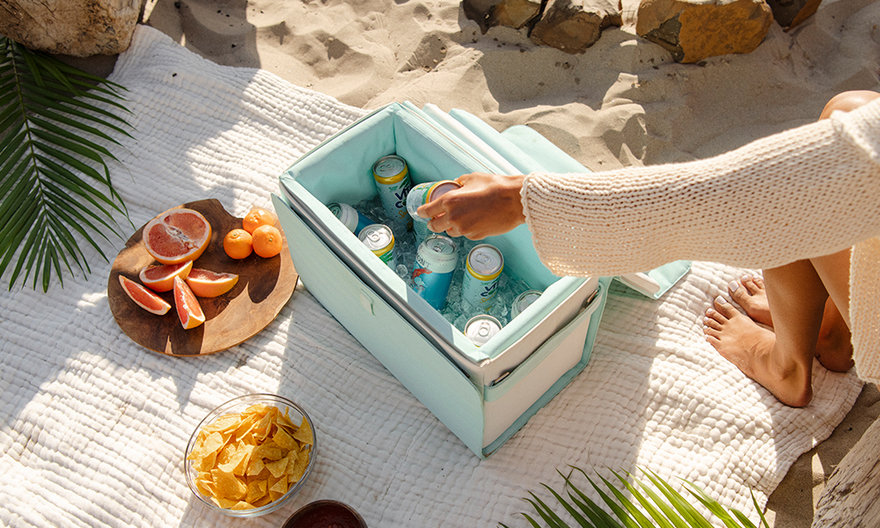 The pair were first introduced to the many facets of the coconut trade during their fieldwork as graduate students at Stanford. “We were in a class called ‘Design for Extreme Affordability’ which brings together students from across different departments into teams which are then partnered with international NGOs to develop affordable solutions to some of the world’s biggest problems,” said Mekler, explaining that they were assigned to work with small-scale tuna fisheries in the Philippines with the goal of improving the livelihood of local fisherfolk. As they explored the area, they noticed an abundance of roadside coconut trees and farms, inspiring them to research the nut itself, and discovering its insulating qualities.

After three years of conceptualization, with local farmers and fishers as beta testers, they were able to prototype an insulation system similar to a styrofoam container but collapsible enough for workers to easily carry onto boats and transport to market. “Living in a fishing community and making prototypes alongside the fisherfolk, we were going each day to the beach with a new design, and they were taking it out to sea. They were coming back with feedback, and we would start over again.” Through this trial-and-error process, the pair built a grassroots network of advisors and supporters in the Philippines who they continue to work with today. They were also able to conceptualize a new way to empower entrepreneurship in the region. “Without a market for their husks, farmers generally burn that waste,” Cutler explains, noting that each year billions of leftover shells and husks are discarded, releasing tons of CO2 into the atmosphere. Now, the team sources these leftover coconut husks from farmers, providing an additional stream of income for necessities and community investment—all while encouraging more sustainable farming practices. 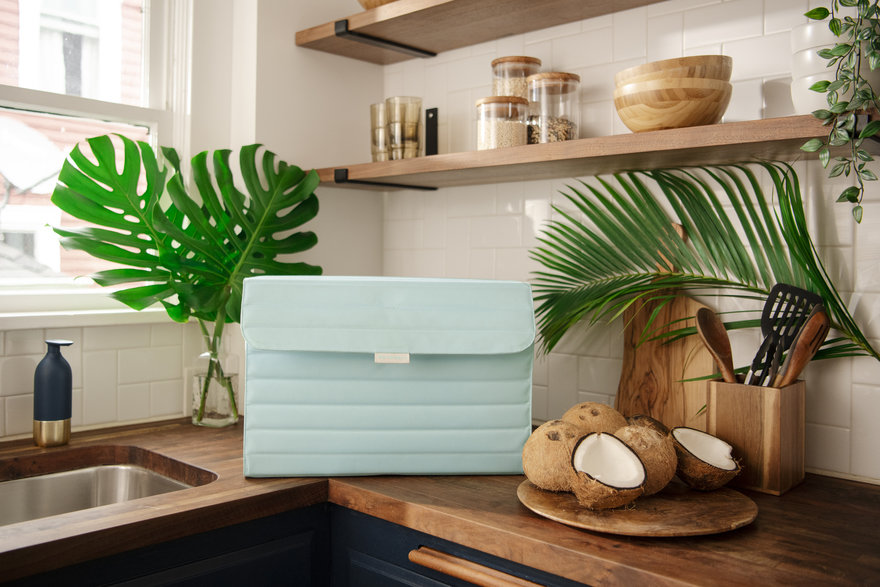 Designing outside (and inside) the box

Created in collaboration with Box Clever, the design studio that helped bring Nebia showers and Away luggage to life, the entire cooler is created with sustainability in mind. Even the Nutshell Ice Pack is made with recycled polyester that ships empty to minimize its carbon footprint. Each unit is made from the husks of 24 coconuts, the bulk of which are in the biodegradable insulation. There is also a liner on both the outside and inside made from upcycled textiles and recycled plastic bottles. “Of course, that part is not biodegradable, but we’ve designed it in such a way that it’s easy to pull out the insulation panels so you can compost it and then recycle the rest of the cooler,” explains Cutler.The Nutshell Cooler is part of the pair’s sustainability-driven company Fortuna Cools, whose first product was a collapsible, six-foot cooler designed for at-sea cold storage for fishing boats. “From the beginning, we’ve focused on performance,” says Mekler. “We’ve seen many cooler products that were so bulky, so inconvenient to carry. They’re heavy. They don’t fit anywhere. They sometimes barely even fit in the trunk of your car when you’re taking it out on your trip. So, collapsibility was a huge feature for us.” 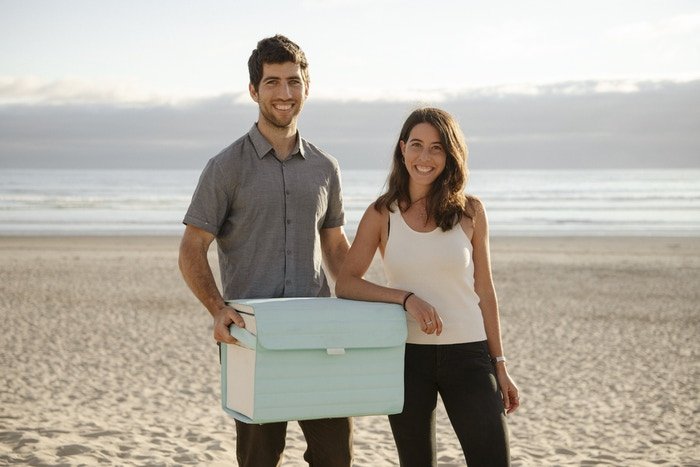 For the creators of Nutshell Coolers, there was never any doubt that they would use Kickstarter to fund their project. “The platform was an obvious place to build our early adopter community and create a moment and a customer base that was going to not only get excited about the product itself but also join us on this journey that we’re on,” explained Cutler. “And you can tell that the journey, the community, and the story is a huge part of what motivates us.”While Cutler and Mekler are pursuing a few directions post-launch, they are mostly eager to finally unveil a product that they’ve worked so hard toward and which has taken them around the world and back. “This has been the product of many conversations. The design itself is easily adaptable to different sizes, anything from a lunch box to a larger multi-day cooler,” says Mekler, explaining that they have developed an innovative insulation material that can also be used in everything from construction to supply chains. “The sky’s the limit when it comes to uses. But we’re most excited to see what happens out of this campaign and put some of the ideas that we’ve been sketching for so many years into the world.” 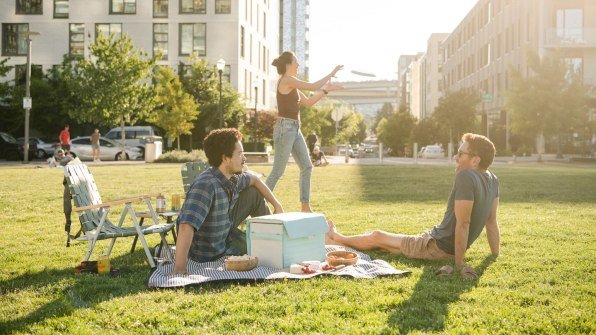 A cooler world is possible

“One of our core values is learning and demonstrating that there are solutions that come directly from nature that can address some of the challenges that we’re trying to solve in different ways,” says Mekler. “There is so much potential in natural materials and natural solutions if we can harness them to create better products, with better materials and with a lower footprint.” In addition, she explains that working toward a more sustainable society will have a positive impact on both the people and partners that make these products a reality as well as on the environment itself. The cooler’s success on Kickstarter also points to a growing enthusiasm from consumers and design-lovers for aesthetically-superior products that are mindful of resource extraction and the lifecycle of the product. “There are so many more opportunities to be making products and businesses around those types of win-win situations, and I’m excited for this to be a demonstration that that can happen.”

Nutshell Coolers are available on Kickstarter until September 16.

Watch to launch your own Kickstarter campaign? Click here.