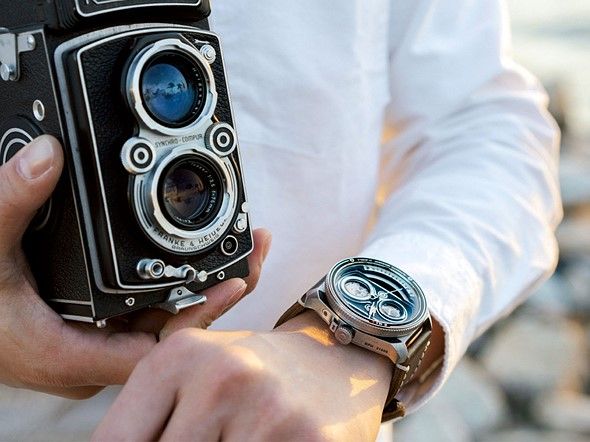 Meet the TACS ATL (Automatic Twin Lens), a new camera-inspired watch created by TACS. At first glance, the watch resembles a classic twin-lens reflex camera (which is what its design was based on). The new model is a new addition to the watchmaker’s Lens Series, which are composed of different photography-themed designs:

TACS writes, ‘First released in the late 1920s, twin-lens cameras were widely used by photojournalists and correspondents to document World War II in Europe thanks to its robust and periscopic design. It was said that the inventor came up with the idea for the camera during World War I on a trench while peeping through a periscope.’

The watch was designed over two years and no consideration was spared during the design process. The dial in the center of the watch face looks like a twin-lens reflex camera, complete with a leather design. You can see through where the lenses would be to see the inner workings of the camera. Other features include a rotating bezel ring with etching like a lens’s depth of field scale as well as hour and minute indexes. The crown is inspired by vintage focusing knobs and the crown protector looks like a camera strap’s eyelet slot.