Russia invaded Ukraine over 7 months ago and we still can’t see the end, especially after Putin declared a partial mobilization and keeps threatening the use of nuclear weapons. However, that doesn’t stop people from speculating what end it could bring.

One of those people is Elon Musk, who tweeted four outcomes if Ukraine and Russia declared peace. Twitter users are already used to Elon Musk’s eccentric opinions, but they were shocked to see the pro-Russian tendencies in his post, so they gave him a piece of their own mind and even politicians like Ukraine’s president Volodymyr Zelenskyy responded. 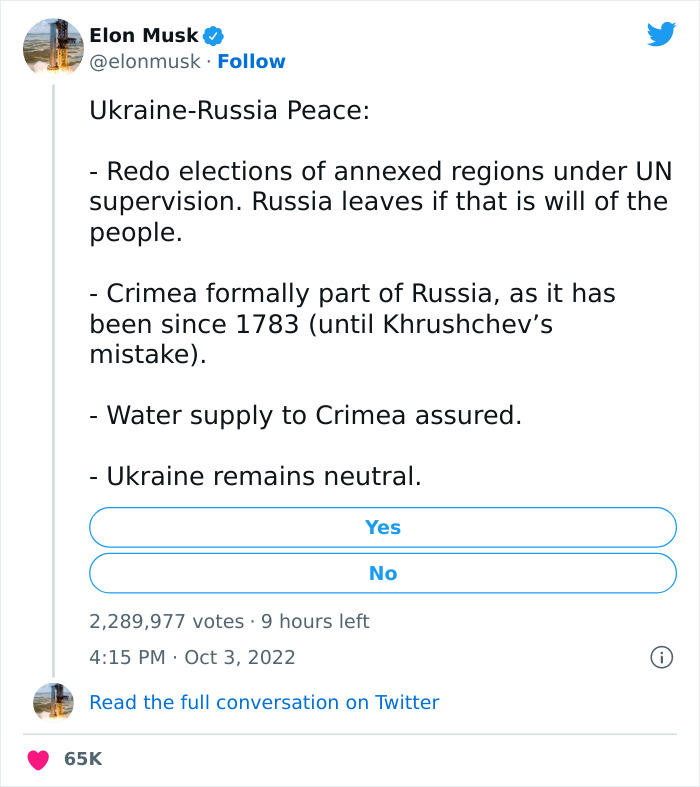 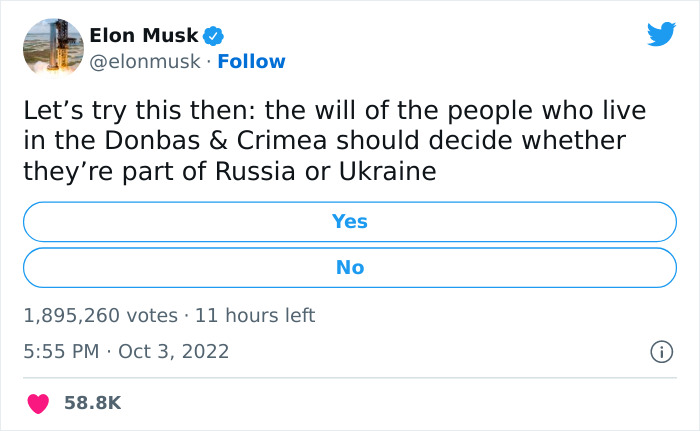 The world’s richest person and most controversial personality on Twitter did it again and made the internet go mad. He speculated what the results of the Russo-Ukrainian war could be and what he thinks is the most likely.

First of all, he thinks that the UN should supervise a new election in the annexed regions as nobody believes that the “referendums” held by Russia were transparent. The world doesn’t recognize those referendums as valid and Putin’s declaration that those territories are now part of Russia doesn’t mean anything.

Twitter users don’t believe there is a need for a new vote, because those areas were always part of Ukraine and it should remain that way.

The second point Elon Musk wrote was even worse. He thinks that the only way Ukraine could get peace is by sacrificing Crimea, which is actually already “formally part of Russia, as it has been since 1783 (until Khrushchev’s mistake).”

Crimea did become a Russian territory in 1783 under the rule of Catherine II (the great), but only because it annexed the region and started a russification process. According to Encyclopedia Britannica, “The Soviet collectivization process was especially harsh in Crimea, and tens of thousands of Crimean Tatars perished during Joseph Stalin’s suppression of the ethnic minorities. In May 1944 the remaining Crimean Tatars—some 200,000 people—were forcibly deported to Siberia and Central Asia for allegedly having collaborated with the Nazis during World War II.”

Not only that, but in 1997, with the signing of the Treaty of Friendship, Cooperation, and Partnership (1997), “Crimea was once again affirmed as Ukrainian territory.” With the Treaty of Friendship, the countries promised to not invade each other or declare war on each other. So Russia annexing the peninsula in 2014 violated all of the most important points of the agreement.

The point of Crimea being guaranteed to have water refers to 2014 when Ukraine stopped the water supply to Crimea through the North Crimean Canal, which was very important for the rice fields as it covered 80-85% of all the freshwater needs in the region. It became a big part of the Russian propaganda which, in their eyes, justified their aggression against Ukraine. 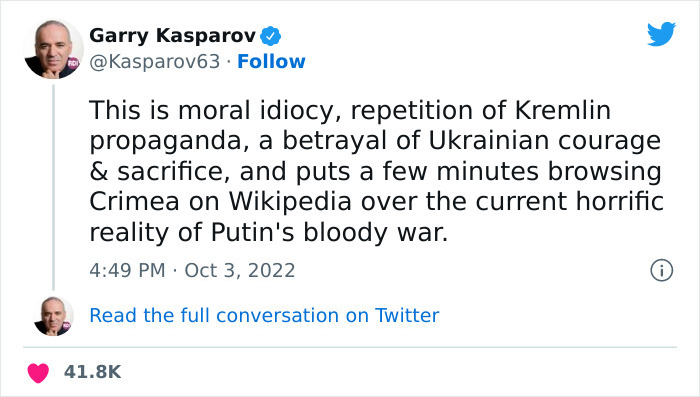 The last point about Ukraine remaining neutral is also problematic, because the country wants to be independent and make decisions based on what is good for the people without considering if Russia gets their feelings hurt about it.

To sum up, Elon Musk tweeted that this scenario is highly likely and hinted that it should happen sooner than later in order to avoid more deaths. He also believes that Russia is crazy enough to use nuclear weapons and experts agree that this scenario can’t be ignored. 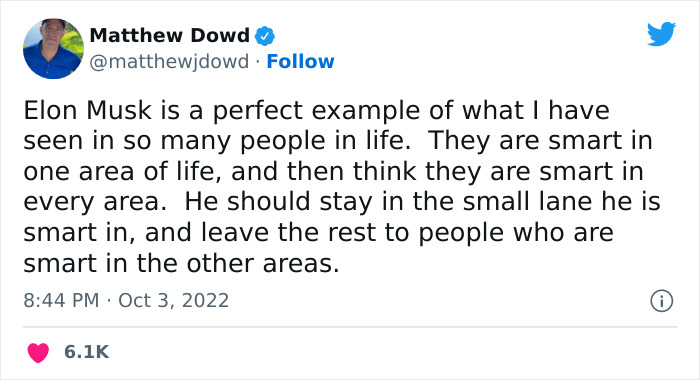 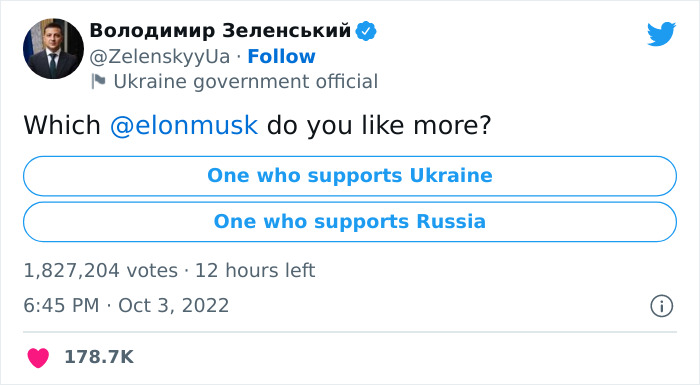 Despite the responses from people who voiced their opinions in the comments and got their tweets pushed up the thread because of the amount of likes they were getting, the poll’s results are surprising.

While the majority of people (about 60 percent) answered “No” in the poll, about 40 percent of them agreed that Musk is making sense. 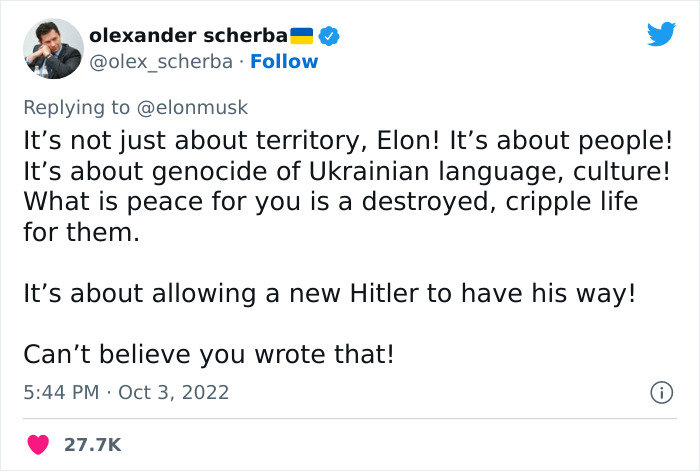 However, that would mean defeat, and Zelenskyy stated numerous times that he is not compromising and won’t sacrifice any of the territories of his country, so to know that so many people believe he should and this is the only way to end the war is demotivating.

Especially knowing that Putin declared partial mobilization and while experts admit that this means an escalation of the war, it also signals “battlefield reverses and a shortage of personnel.” Not only that, but the mobilization isn’t going smoothly and Russians are fleeing the country, hiding or going to protests.

When the war started on the 24th of February, people were sympathetic toward Ukrainians and were supporting them with their hearts, but they didn’t believe the country would last long and Russia’s plan of seizing Kyiv in 3 days would be carried out successfully.

But the world didn’t expect for Ukraine to defend their country with such power, motivation and skill. We started to believe that Ukraine can actually do this if we give them enough support, and they are doing great with the limited supplies they get. So now is not the time to talk about giving up territories and allowing Russia to organize referendums.

We would like to know what you would say to Elon Musk if you had the chance to respond to his “peace plan.” Which of the tweets do you agree with the most? What do you think can be done to make Ukraine’s victory come faster? Let us know your thoughts in the comments. 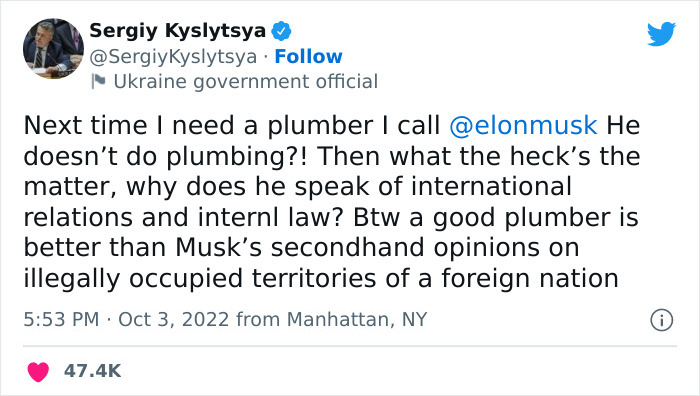 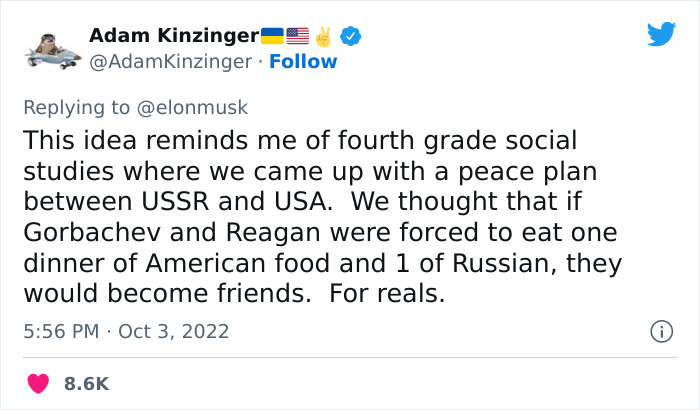 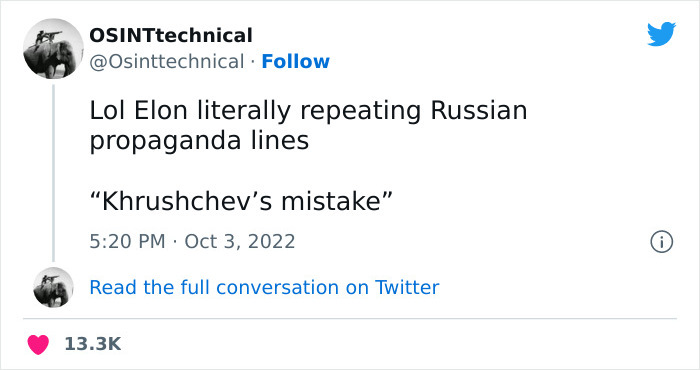 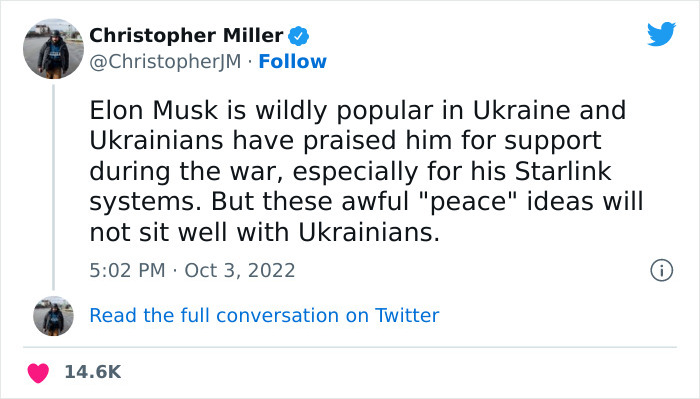 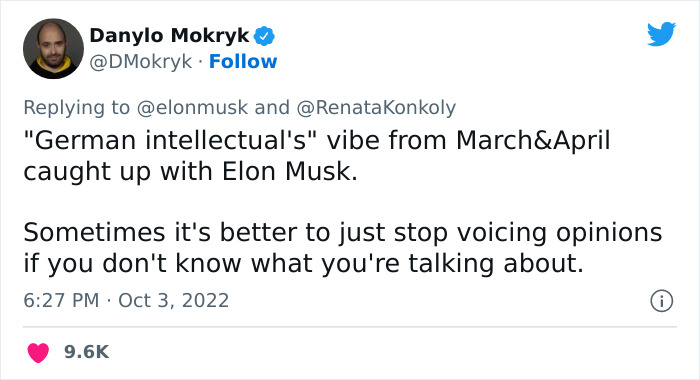 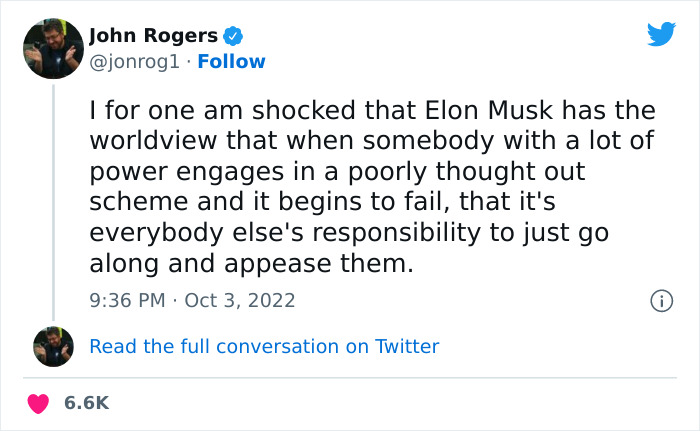 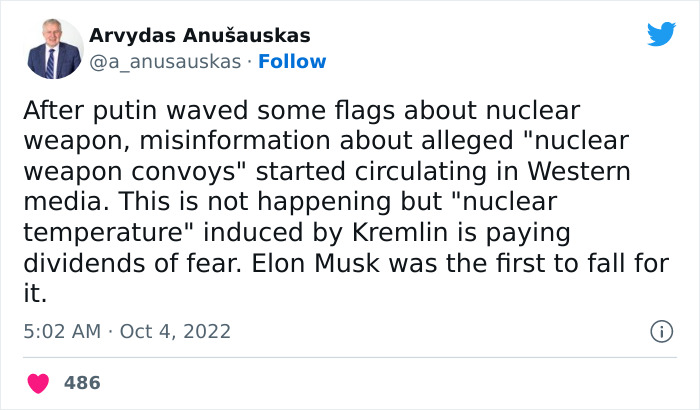 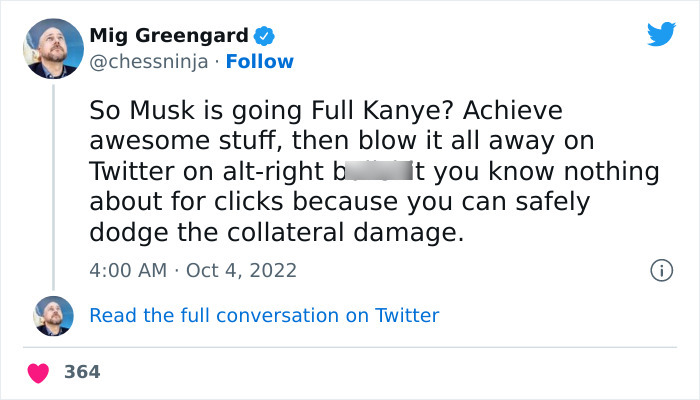 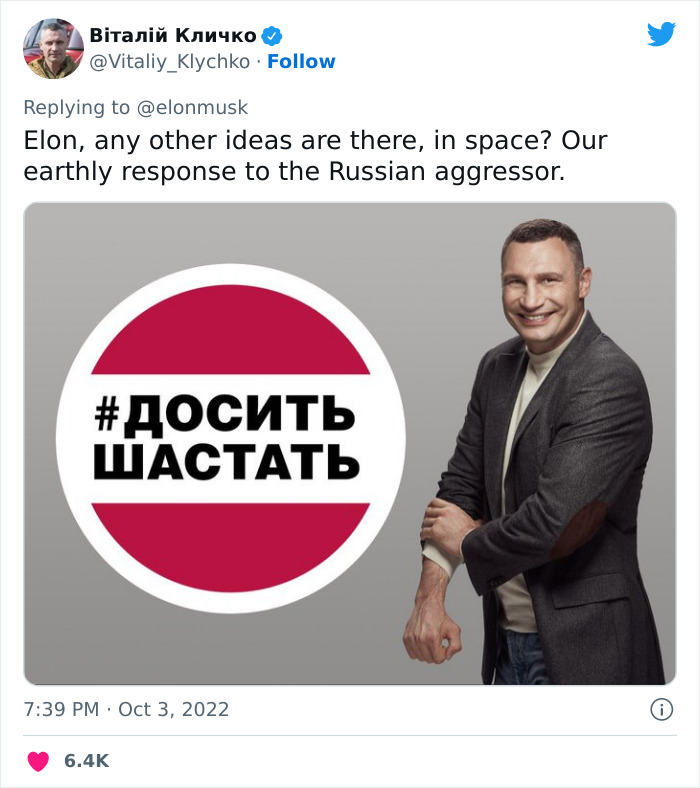 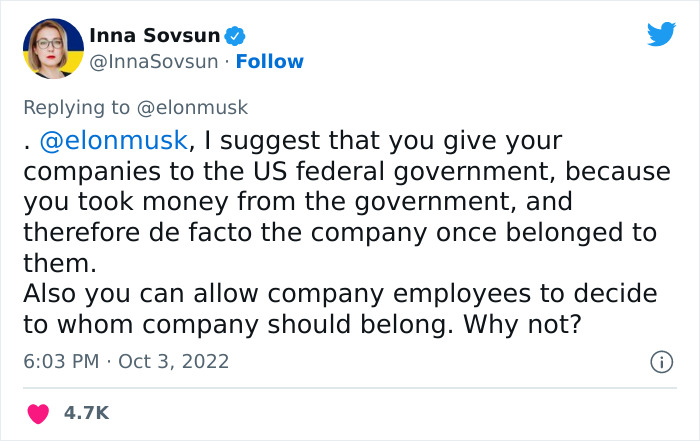 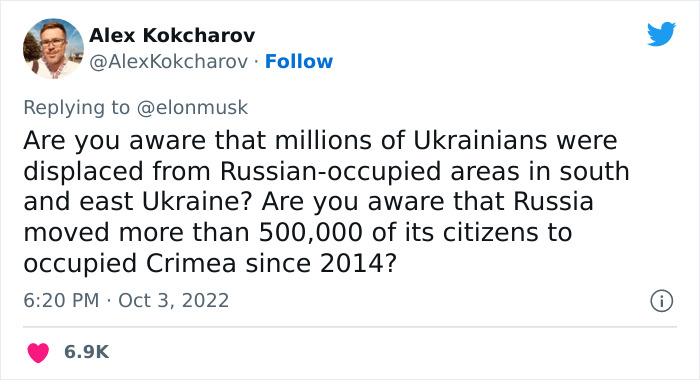 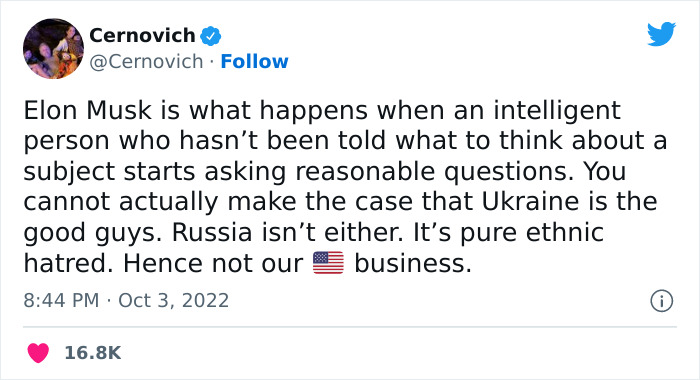