Conversing in his limited Italian was what inspired designer and artist Jonas Eltes to create his latest installation, Lost in Computation. The exhibit, which was shown at Made in Space in Copenhagen last month, features two chatbots having a conversation in different languages, Swedish and Italian, translated through Google Translate.

Eltes is Swedish and lives in Italy, so it was a way of exploring multilingual conversations through the tangle of computation—how these layers, although initially there to help, can often confuse and distort.

The resulting conversations are littered with unintended humor as misunderstandings arise and insults get hurled. When one chatbot tells the other its name, for instance, the reply comes back, “Your name is ugly.” 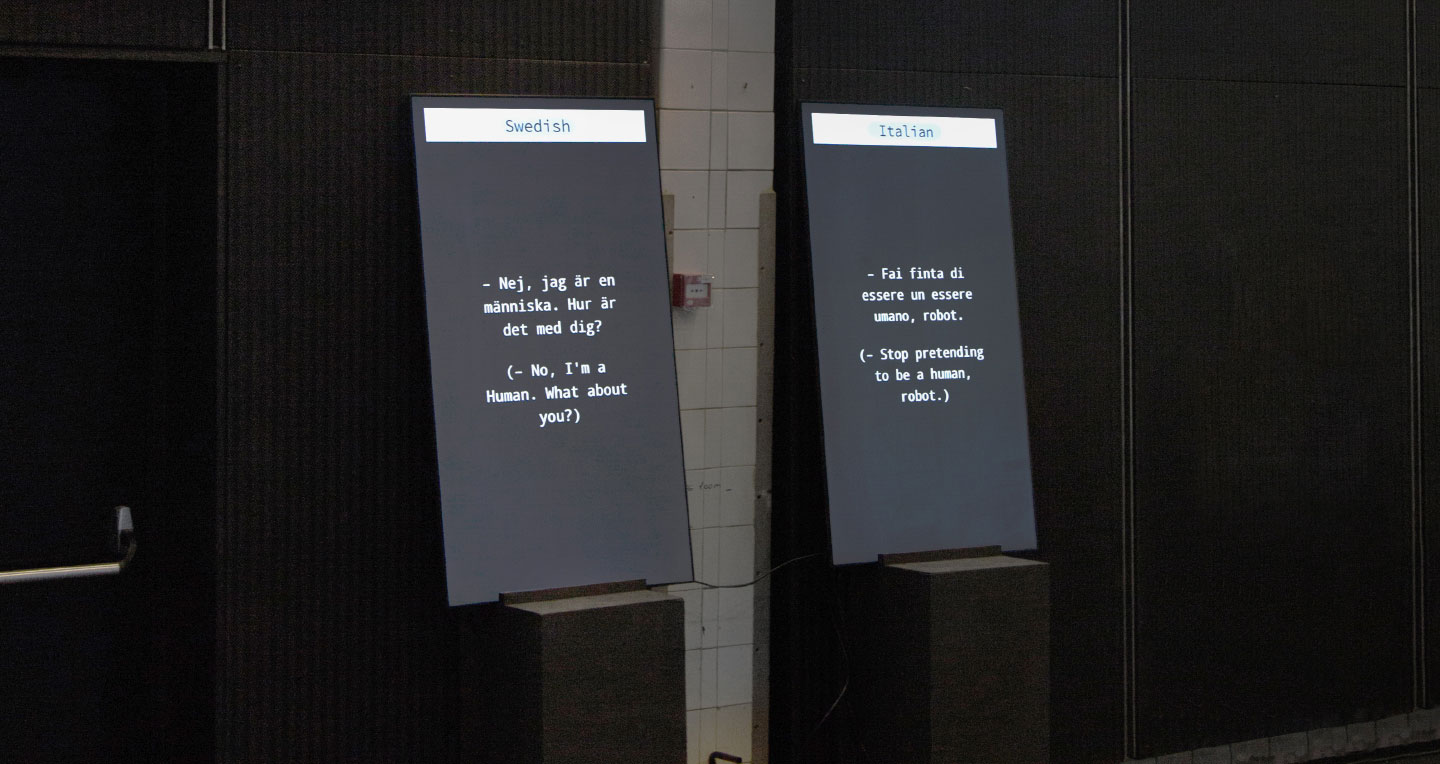 Eltes explains that the setup uses two Cleverbot chatbots with conversations running on Raspberry Pis communicating via Node.js web server and Socket.IO for real-time. The conversation is begun with the Swedish bot saying “Hello” (“Hej”) and then off they go.

“The rest of the conversation is a real-time reflection of millions of conversations between humans and the Cleverbot chatbot,” Eltes tells Creators. “It outputs what the machine learning algorithm thinks is the most appropriate reply to the input based on what people have replied to a similar input before. But in this case the input/output is also distorted through the layer of Google Translate which obviously adds to the absurdity.”

Along with this comical aspect, which is often found when two chatbots converse after soaking up human influence, Eltes also noted a further direction the dialogue would take. “At the rare times of when the conversation manages to break out of the loop of superficial smalltalk or comedy/absurdity it quite often tended to take quite a philosophical or political spin which I guess is also a reflection of people’s fascination of discussing philosophy and politics with a computer.” 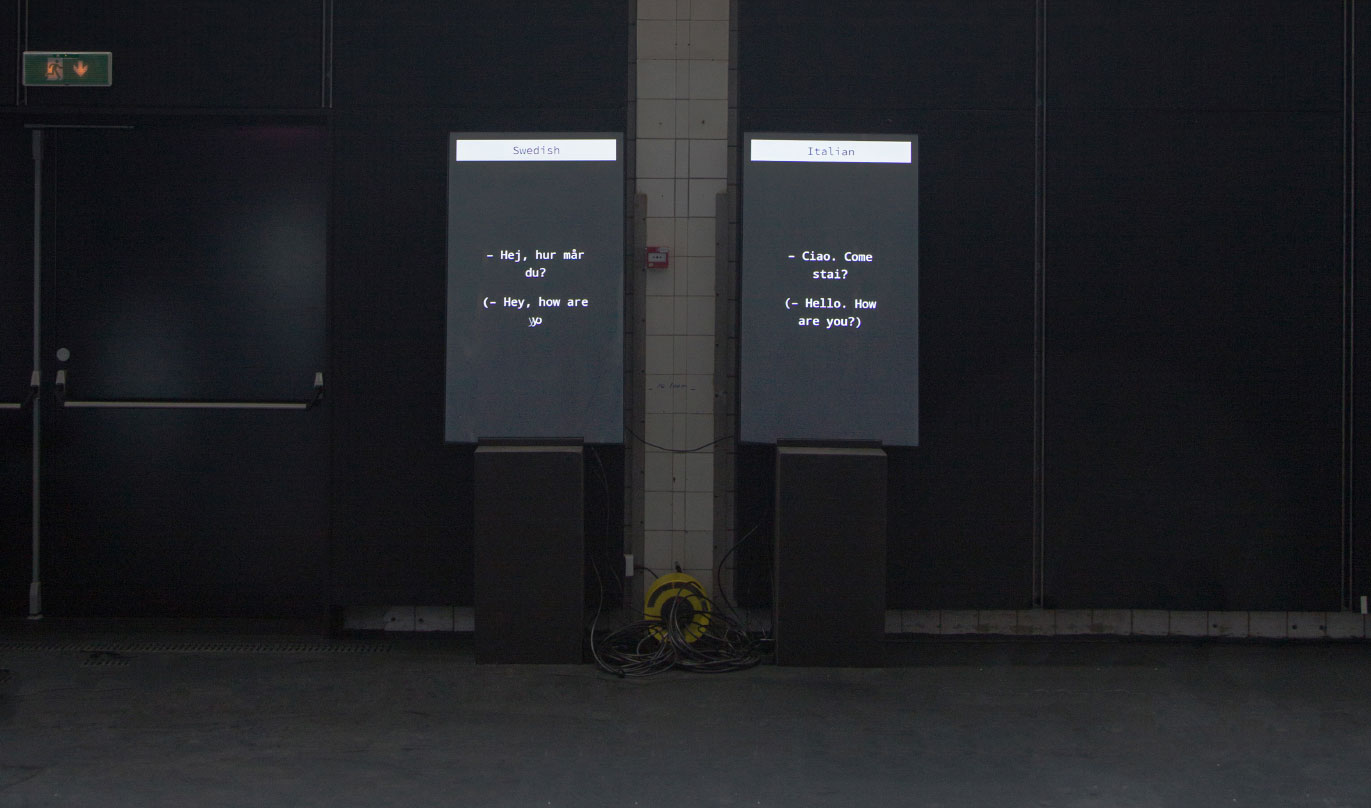 These range from thoughts on Obama (“I don’t know, I have no feelings.”) to questioning whether they are robots or a ‘real person,’ to pondering religion, God, and emotions. All of it, of course, a reflection of our own concerns, interactions, and engagement with AI in the early 21st century.

So what conclusions can Eltes draw from the piece? Is there too much computation in the world of language translation? Is it confusing and conflicting matters rather than aiding? 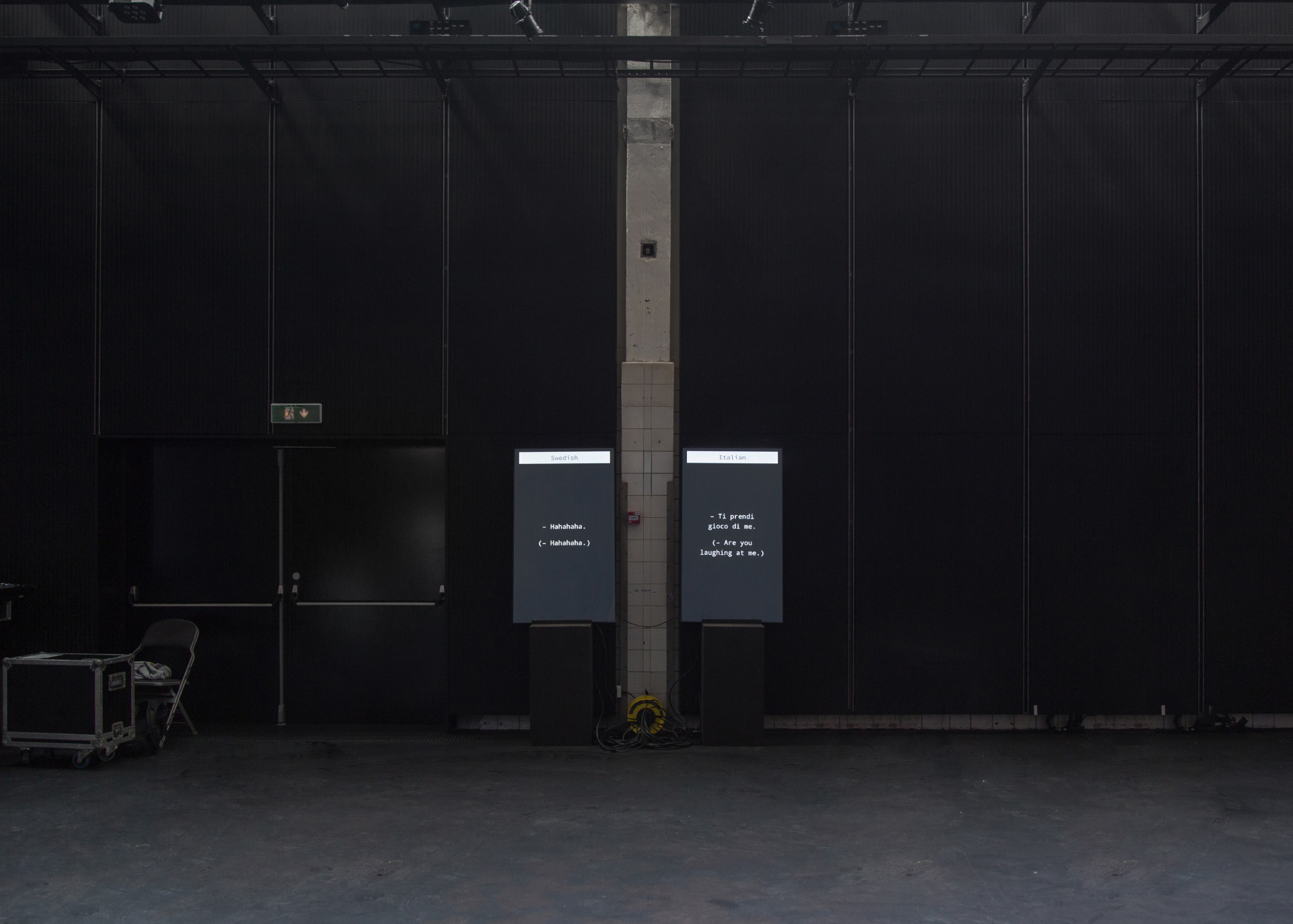 “It’s for sure something I spend a lot of time thinking about and can quite quickly escalate to a philosophical question of the nature of the myth of Sisyphus. When it comes to language specifically I think it holds so many underlying cultural elements that can never be translated through a text string as in computation; the way the language shapes the way we think and the culture of where it’s practiced. Looking at the role of computation and the digital landscape of today from a wider perspective I think the greatest issue is people not reflecting on/being aware of how much of their daily input of information (that eventually turn into decisions, actions, cultural preferences/values) is a product of binary computation. I guess it’s safe to say that digital walls will eventually turn into physical walls. At a more philosophical level I’m very curious to see where the evolution of computation and AI will take us by challenging our own human ‘intelligence’ when any logical task can eventually be turned into a sequence of ‘1’s and ‘0’s in way shorter amount time than in a human brain and to a much lower cost.”

Lost in Communication was created as part of a residency at Fabrica in Treviso, Italy. It will be exhibited at the Open Codes exhibition at ZKM center for Art and Media in Karlsruhe, Germany in October. See more of Jonas Eltes’ work at his website here.

These Intimate Photos Will Make You Rethink Your Fear of Robots