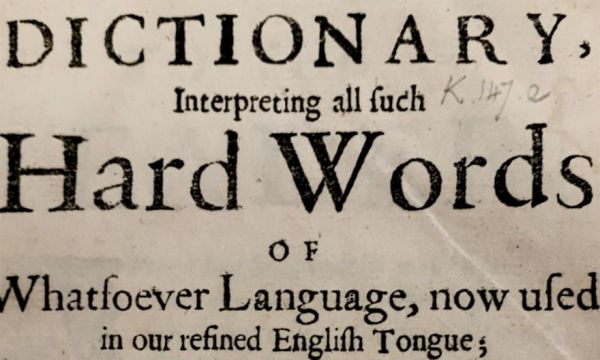 English, as she is spoken, is as simple or difficult to learn as most other languages. But English as she is written is really weird. We’ve seen many examples of strange English spelling, such as “ough,” used in thought, drought, tough, cough, through, and though, which are all pronounced differently. How did English spelling become so disengaged from pronunciation? Linguist Arika Orent (previously at Neatorama) takes us through a history of written English to explain how it happened. There was a period of several hundred years after the Norman Conquest when English wasn’t written down much at all. And as England was struggling out of that confusion, the movable type printing press came along. Typesetters had plenty of choices, but no strict guides.

Some standards did spread and crystallise over time, as more books were printed and literacy rates climbed. The printing profession played a key role in these emergent norms. Printing houses developed habits for spelling frequent words, often based on what made setting type more efficient. In a manuscript, hadde might be replaced with had; thankefull with thankful. When it came to spelling, the primary objective wasn’t to faithfully represent the author’s spelling, nor to uphold some standard idea of ‘correct’ English – it was to produce texts that people could read and, more importantly, that they would buy. Habits and tricks became standards, as typesetters learned their trade by apprenticing to other typesetters. They then often moved around as journeymen workers, which entailed dispersing their own habits or picking up those of the printing houses they worked in.

Standard-setting was only partly in the hands of the people setting the type. Even more so, it was down to a growing reading public. The more texts there were, the more reading there was, and the greater the sensibility about what looks right. Once that sense develops, it can be a very powerful enforcer of norms. These norms in the literacy of English speakers today are so well entrenched that simple adjustments are very jarring. If ai trai tu repreezent mai akshuel pronownseeayshun in raiteeng, yu kan reed it, but its difikelt and disterbeeng tu du soh. It just looks wrong, and that feeling of wrongness interrupts the flow of reading. The fluency of reading depends on the speed with which you visually identify the words, and the speed of identification increases with exposure. The more we see a word, the more quickly we recognise it, even if its spelling doesn’t match the sound.

Some spellings got entrenched this way, by being printed over and over again in widely distributed texts, very early on.

Once spelling was standardized in printed text, it tended to stick even when pronunciation changed. There’s a lot more to it, which you can read at Aeon. -via Metafilter