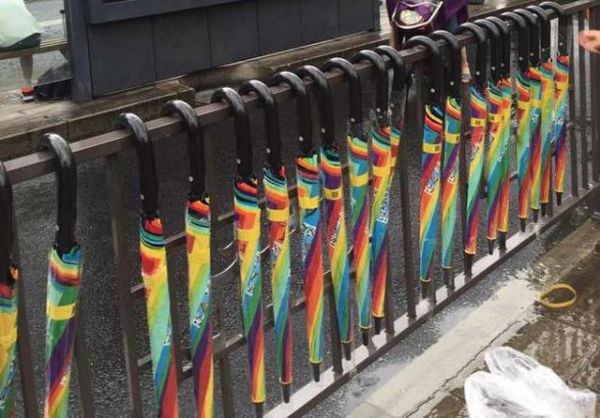 With the success of companies who invest in “sharing” goods and services like Airbnb, Uber, and the various metro bikes systems, the Chinese company Sharing E Umbrella set out to provide umbrellas to commuters when they need one. The company bought 300,000 umbrellas at 60 yuan each. Those who need an umbrella in one of 11 cities in China can use an app to put down a 19 yuan deposit and pay 50 jiao to use it for a half-hour. You can see where this is going. Why would someone buy their own umbrella for 60 yuan when you can get one for 19 yuan and some change?

While Sharing E Umbrella gave out their umbrellas at train and bus stops, they soon realized that getting users to return the umbrellas would be a problem. “Umbrellas are different from bicycles,” Zhao said. “Bikes can be parked anywhere, but with an umbrella you need railings or a fence to hang it on.”

The SCMP reports that Zhao concluded that the safest place for an umbrella would be at the customer’s home, where it would be safe and undamaged. But, apparently, customers have skipped the final step of then returning the umbrellas, simply keeping them for themselves.

The result is that only a few weeks into the plan, the company has lost almost all of its umbrellas. In that, it has joined with two Chinese bike-sharing companies that had most of their bikes stolen. But Sharing E Umbrella CEO Zhao Shuping is not giving up. He says the company plans to buy 30 million more umbrellas. Read more of the story at Shanghaist.