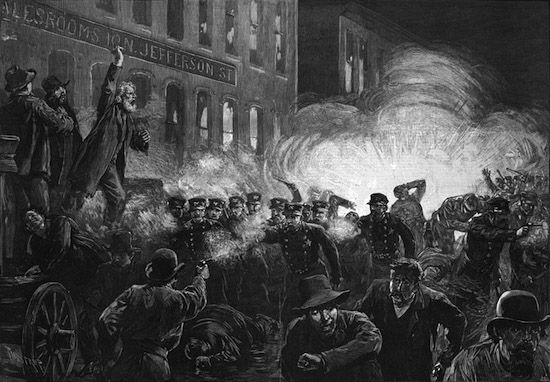 If you think there are a lot of protests in the United States in 2018, you’d be right, but it’s not like we haven’t done it before. Think back to the Civil Rights Movement and the Vietnam War protests- those were only 50 years ago, and 50 years is a rather long stretch between major uprisings in America. After all, the country was born as a protest against Britain. Since then, we’ve seen the Civil War, the fight for women’s suffrage, labor strikes, and more. Those were all sparked by people protesting against the status quo.

The labor movement had been brewing since the Colonial era, and the first recorded strike—by skilled tailors protesting reduced wages—happened in 1768. At the time, most Americans did some farming to support their families, developing their craftsmanship in the winter months. Work hours were not much of an issue: Self-employed farmers put in the most hard labor for about six months of the year, estimated at 8-10 hours a day. In the early days of the United States, craftsmen began organizing trade unions in cities around the country to protect their fields from cheap and shoddy workmanship.

But as the Industrial Revolution progressed in the new country, it revealed cracks in the Enlightenment ideals about equality the United States was founded on. Mechanized production created three distinct classes, the upper class or the company owners, the middle class or the business professionals, and the working class who labored in the factories. The growing wealth gap between the upper and lower classes was at odds with American ideals. Some historians believe factory workers—men, women, and children—would work from sun up to sun down, with only Sunday off. It’s estimated American workers devoted 60 to 70 hours a week to their jobs during the 19th century.

The Working Men’s Party was established in 1828 in Philadelphia and in 1829 in New York City. The so-called “Workies” advocated for men of low economic status, demanding that all (white) men receive the right to vote while also fighting for shorter working hours, educational opportunities, and safeguards from debtor’s prison.

After the Civil War, industrialization took off in earnest as coal, steel, and railroad equipment were in demand to develop the American West. Industry magnates employed bevies of European immigrants in low-wage jobs in their plants. The overworked and underpaid coal miners, steel workers, and train-car builders, among others, began organizing and striking against their wealthy bosses for better pay and improved working conditions. These strikes often led to violent clashes with company guards, police officers, and even the U.S. Army, where striking workers would sometimes be shot and killed. The union members sometimes retaliated with guns and pipe bombs of their own.

Read a chronological rundown of some of the biggest protest movements in American history at Collectors Weekly.