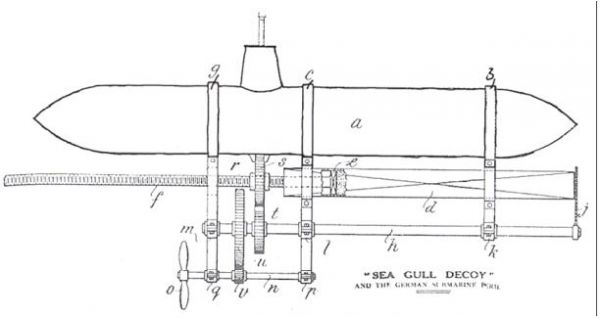 World War I was the first war in which submarines were used effectively on a large scale. German U-boats devastated British shipping in particular and the Royal Navy was keen to find new ways to destroy this new threat. In a 2006 issue of the International Journal of Naval History, David A.H. Wilson writes about efforts to use birds to locate and mark submarines.

The Royal Navy considered a variety of proposals involving seagulls landing on submarine periscopes. Seagulls have sharp vision and search out places to land while at sea. Inventor Thomas Mills advocated training seagulls or pigeons with a floating drone that would travel through the water, dispensing food at its top to bait seagulls. The machine is only a few feet long; it is not the same size as a submarine. But its elongated shape might encourage birds to associate submarine shapes with food.

Alas for Mr. Mills and other advocates for avian anti-submarine warfare, the Allied navies adopted other approaches to combating submarines, notably the newly-invented depth charge.