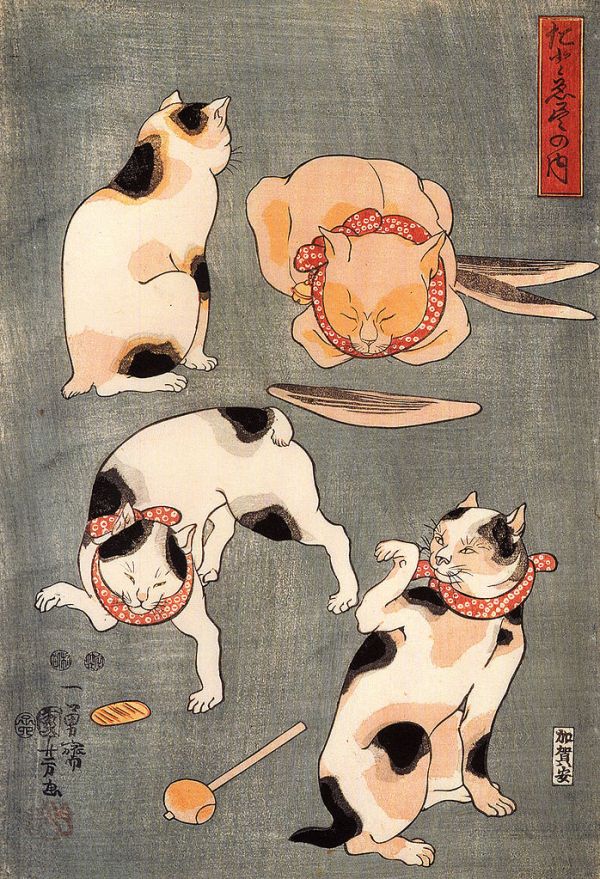 Renowned 19th-century Japanese illustrator Utagawa Kuniyoshi has made a mark on Neatorama with his illusions and puzzles, and the fact that he may have been a time traveler. Kuniyoshi’s artworks even popularized full-body tattoos! And there’s always more to explore from such a prolific artist.

‘Cats Suggested as the Fifty-three Stations of the Tokaido’ – Utagawa Kuniyoshi, 1850.#Caturday#ukiyoe#cats#Japanpic.twitter.com/dh6sD9WM2O

Many of Kuniyoshi’s ukiyo-e woodblock prints featured cats. He loved cats and often drew with a kitten in the folds of his kimono. His works included cats in the shapes of Japanese kana script, as anthropomorphic stand-ins for real people, and as puns. An example of this is Kuniyoshi’s Cats Suggested As The Fifty-three Stations of the Tōkaidō. It is a spoof of another artist’s series on those stations, but Kuniyoshi drew cats for each station and put them in positions that illustrated the pun opportunities of the station’s name. Read about that and other cat-obsessive works from Utagawa Kuniyoshi at Illustration Chronicles. -via Everlasting Blort