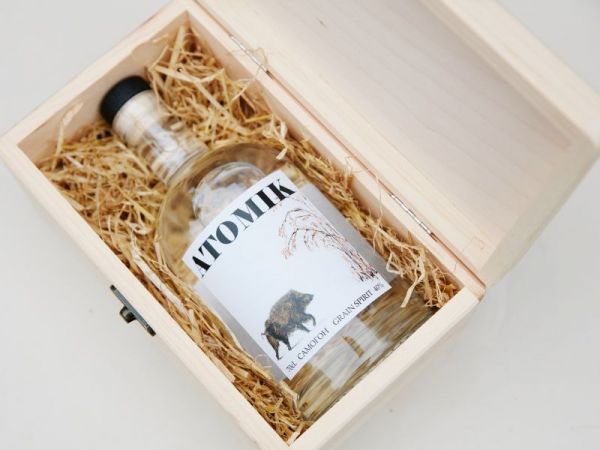 What should the Chernobyl exclusion zone be used for, more than thirty years after a nuclear meltdown? Not for a tech sector with half a million people, no. A wildlife preserve? That’s happened already, as animals took advantage of the lack of people to move in. The zone encompasses 2,600 square kilometers (1,000 square miles), with levels of radiation varying from nope to meh. To promote the possibility of bringing agriculture back to the zone, scientists have produced vodka from grain grown in Chernobyl, using local water.

Described as “high quality artisan vodka,” the alcoholic beverage was brewed by the Chernobyl Spirit Company, and branded—appropriately enough—ATOMIK. Only one bottle of ATOMIK currently exists, and the product is not yet for sale, but it’s considered the first commercial product to come from the exclusion zone, the BBC reports. Jim Smith, a professor of environmental science at the University of Portsmouth, led the project.

Part science, part promotional stunt, the project is meant to demonstrate a possible way in which land in and around the damaged nuclear power plant can be put to good use, namely through the growing of crops. The producers of this single bottle of vodka are hoping it could lead to something far grander—the revitalization of a traditional Ukrainian industry in a region beset by economic distress.

Oh yeah, strict testing shows that the vodka is not at all radioactive. Read more about the project at Gizmodo.