Respect is always earned, never given. Managers set the pace and tone at work, and they can either inspire their employees or create tension by acting arrogant, using threats, being lazy, and not giving a rat’s behind about anyone else’s well-being. Well, karma has a way of sorting things out, eventually.

Redditor u/alexann23, a 17-year-old server and cashier at a “semi-local Italian chain” in the US, went viral after sharing the details of what happened one day at work with the r/MaliciousCompliance subreddit. She explained how she’d come back to work after having taken a lot of time off for her health. During that time, the restaurant had hired a lot of new people.

The redditor was thrilled to help one of the new servers, who’d only been waiting tables for a few days at that point. However, her manager, a phone-scrolling layabout, ordered her to work the counter and to “leave the new girl floundering.” That was a decision she regretted. You’ll find the full story below, dear Pandas.

Bored Panda got in touch with redditor u/alexann23, and she explained the situation as it stands now. “I’ve been avoiding work. I have my eighteenth birthday on January nineteenth and right now I’m a homeless 17-year-old,” she shared. She is currently living off the Supplemental Nutrition Assistance Program. Anyone willing to lend the redditor a hand can do so via Venmo (@H-Ann-Pik23). You’ll find our full interview with her below.

Sometimes, following orders to the letter is the best way to put bad managers in their place 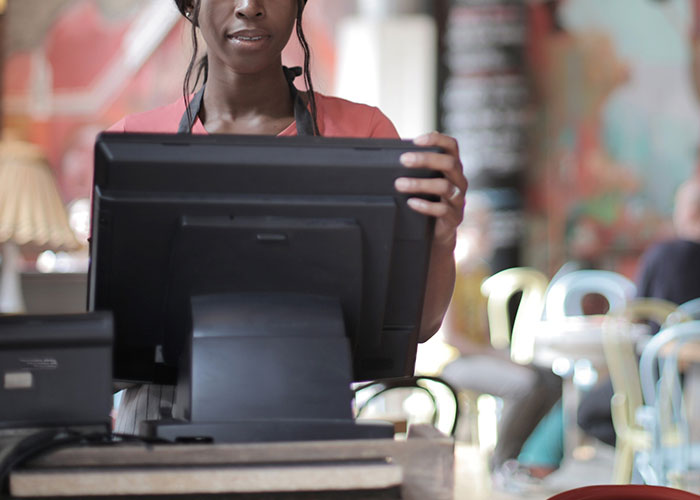 A restaurant employee shared how her lazy manager told her to avoid helping the new girl at work, and what happened next 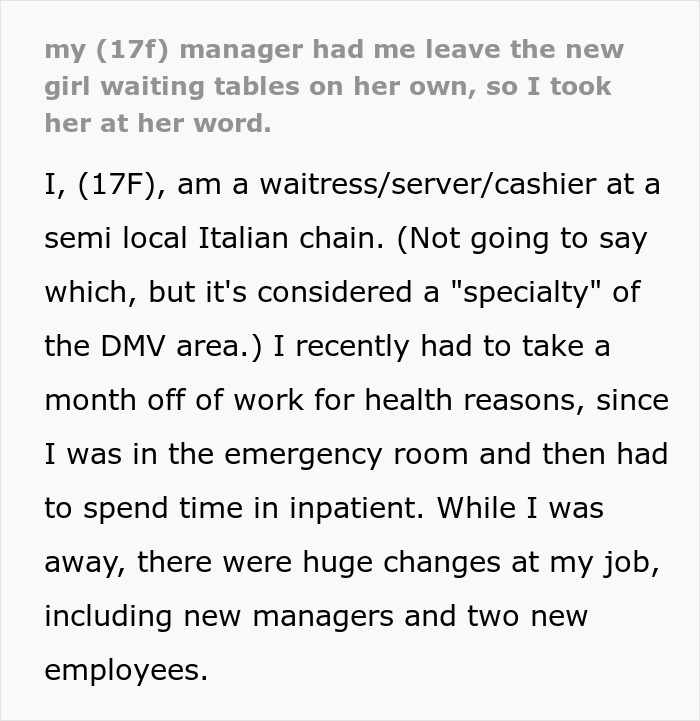 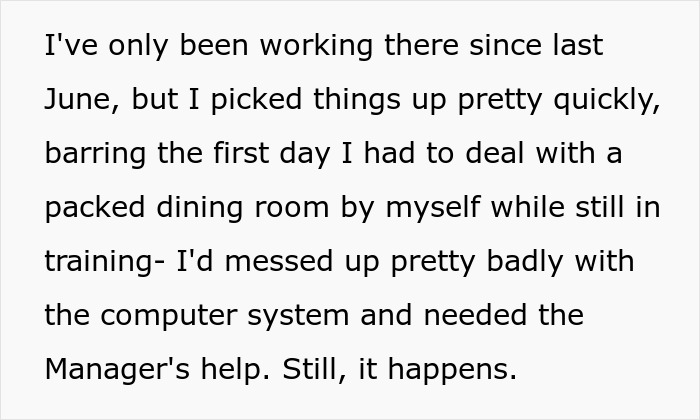 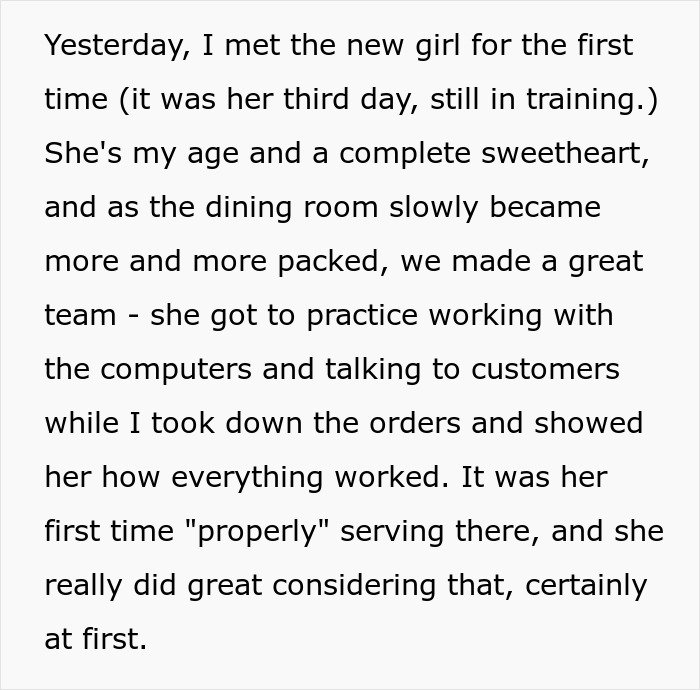 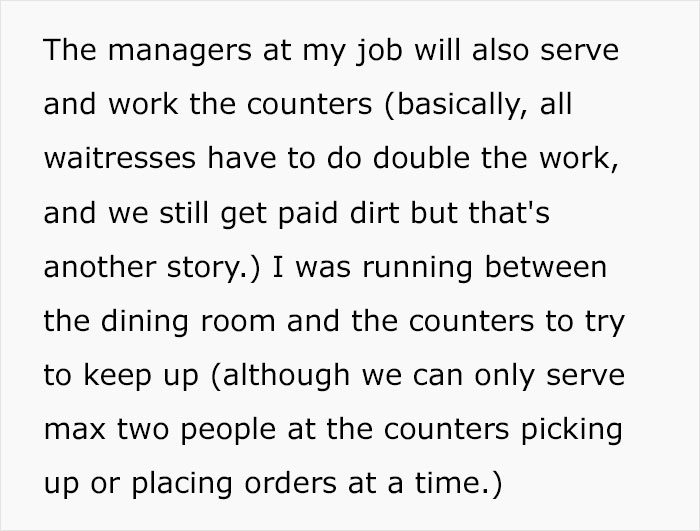 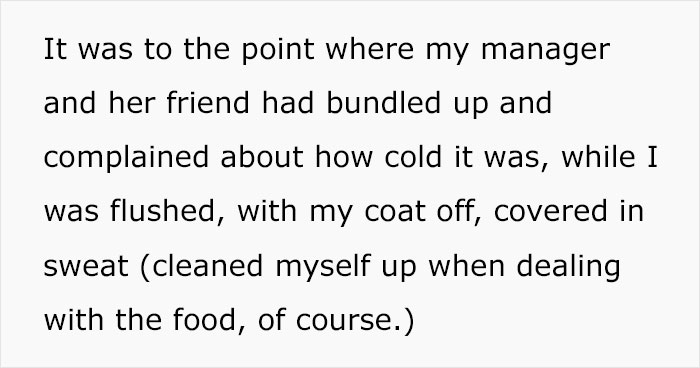 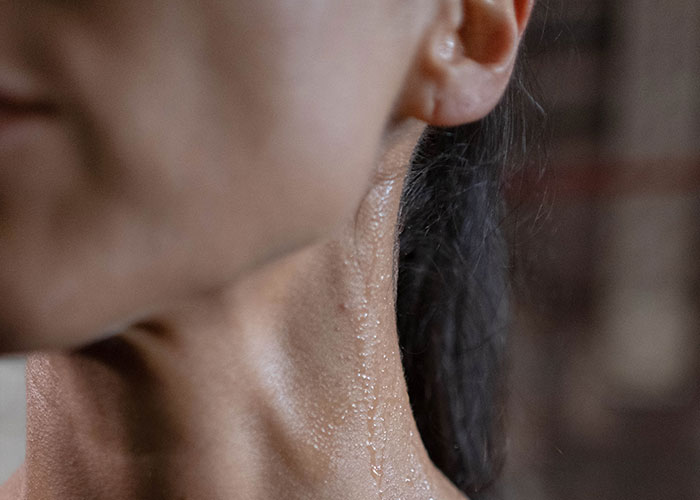 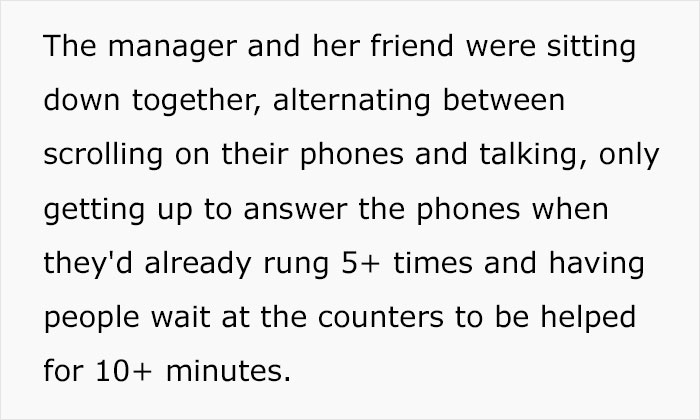 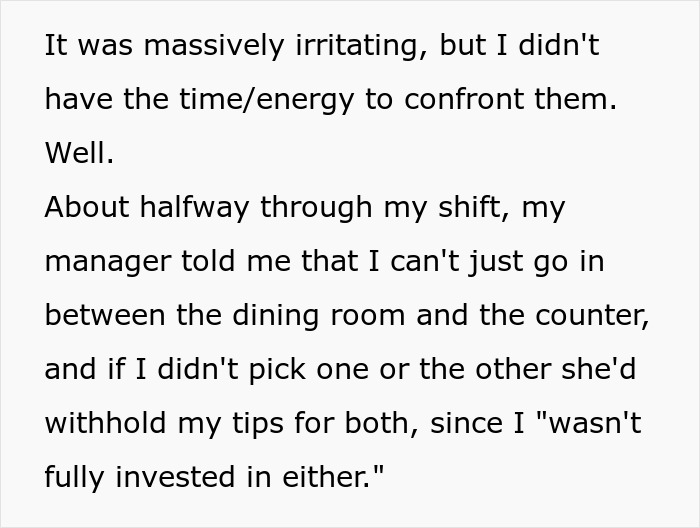 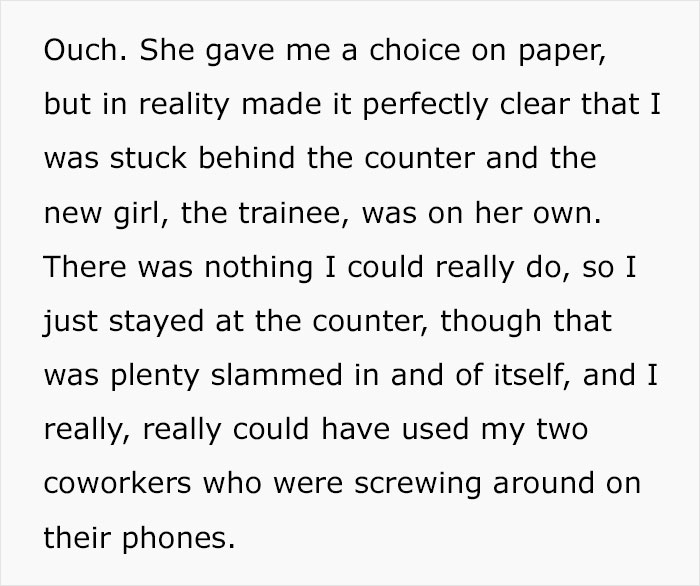 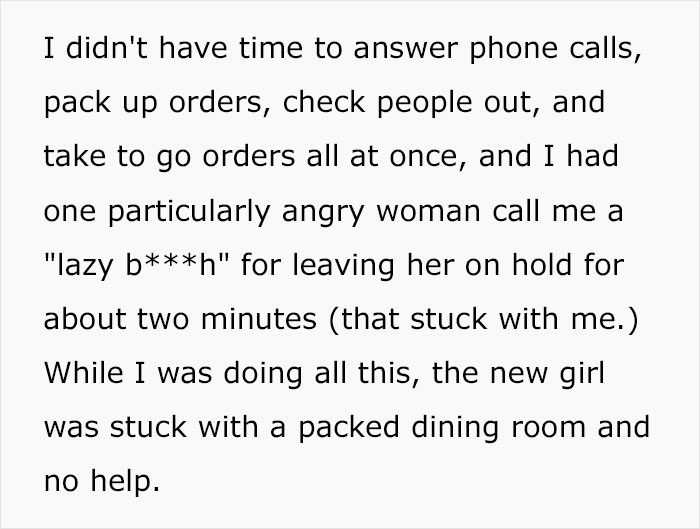 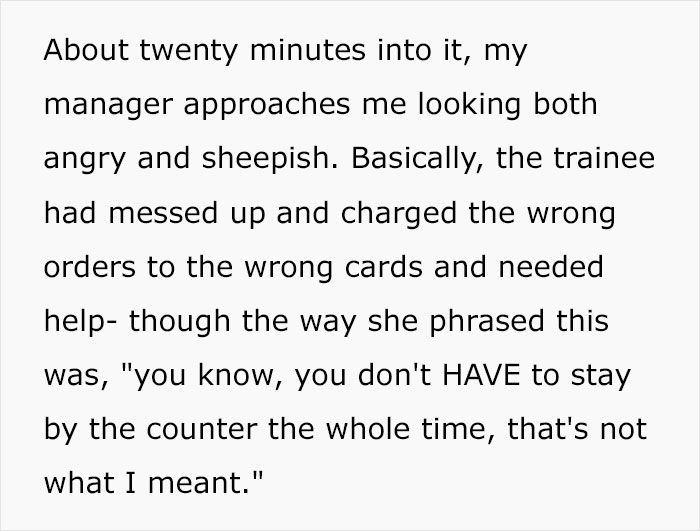 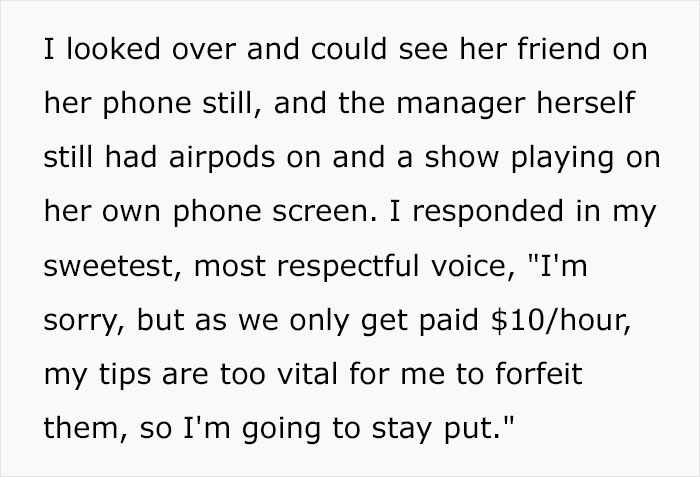 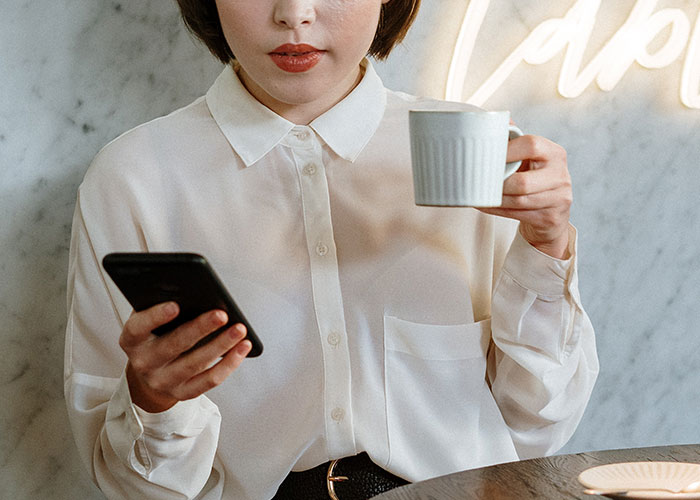 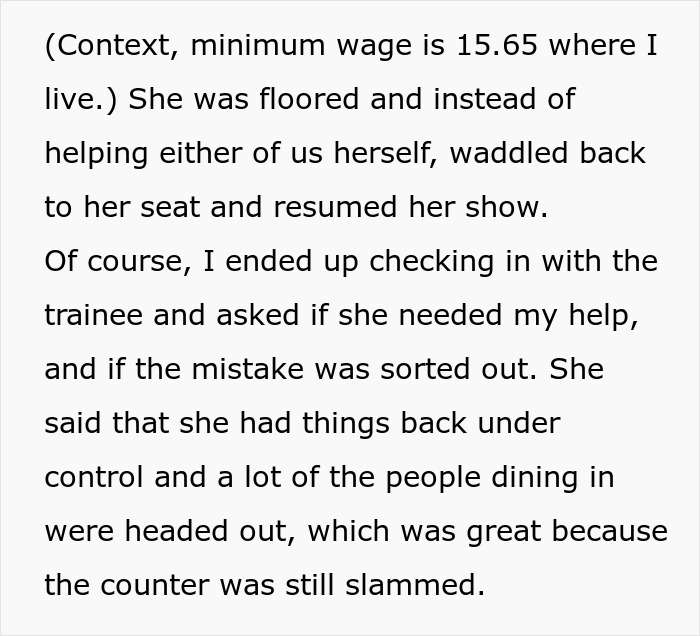 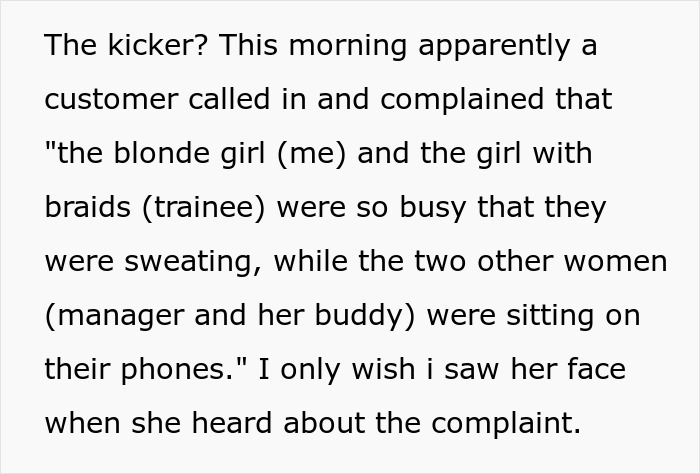 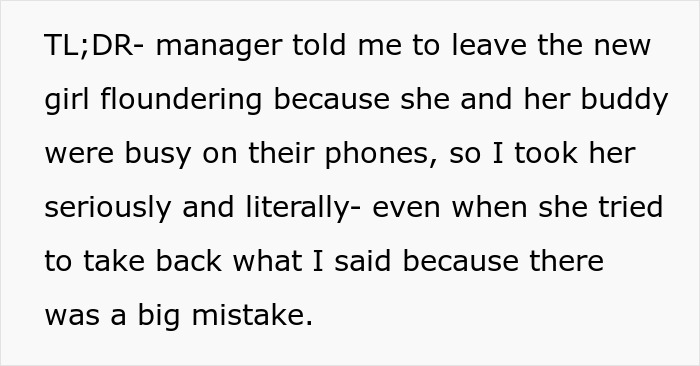 The author later updated the story 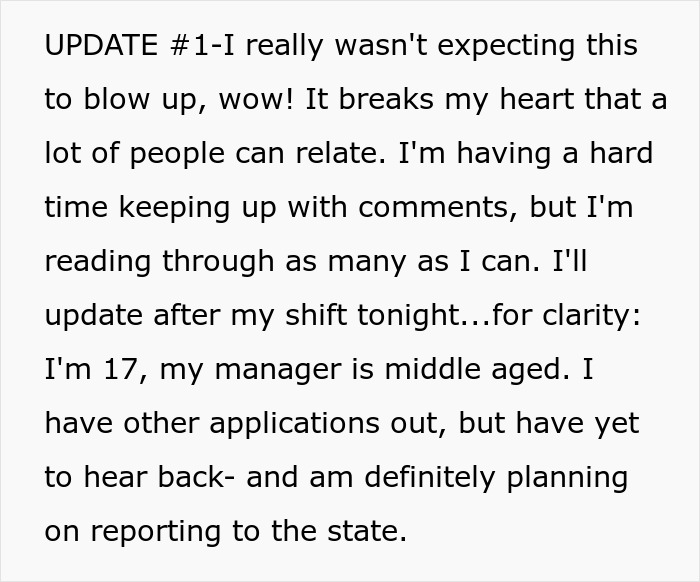 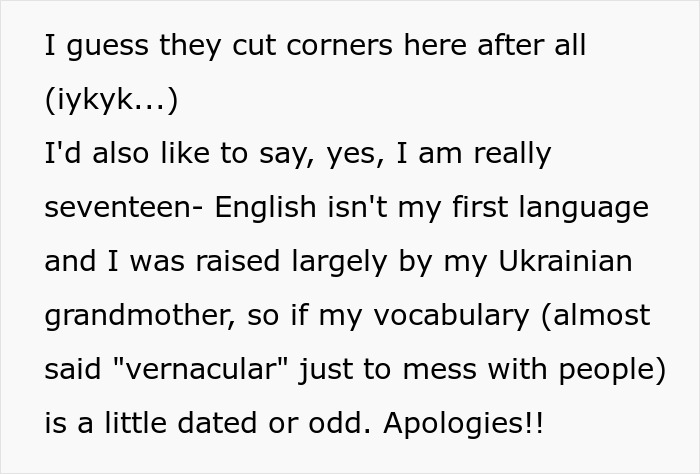 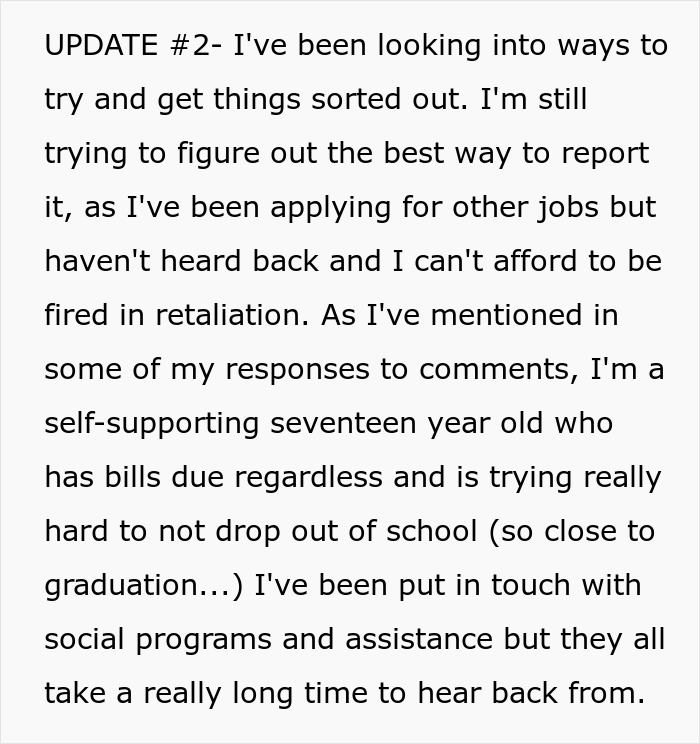 The manager quickly showed her colors. Not only did she threaten to cut back the OP’s tips and told her to ignore the new girl, she also prioritized her phone time over doing any kind of proper work. Clearly, she’s not ‘management material.’ When whatever show you’re watching on your phone is more important to you than the well-being of your colleagues, there’s a problem!

When the new server ran into some trouble, the manager tried to get redditor u/alexann23 to fix the mess, contrary to what she’d told her before. The OP shut her down in her “sweetest, most respectful voice” that she’s going to stay put so that she gets her tips—something the manager had threatened to withhold. Luckily, the new worker had gotten everything under control.

Meanwhile, one of the customers had complained about how the manager and her buddy were “sitting on their phones,” while “the blonde girl” (the OP) and “the girl with braids” (the trainee) were “so busy that they were sweating.”

Bored Panda reached out to the author of the post and she shared some thoughts about her job, what the situation is like for her at the moment, and what kind of qualities a good manager ought to have.

“I think that the American system of tipping and management is broken and has been getting a lot of attention in the world recently because of global inflation and increased post-covid tourism,” redditor u/alexann23 said that the system needs a fundamental overhaul.

She explained that she’s been “avoiding work” in the time since her post on r/MaliciousCompliance. She’s turning 18 in mid-January, and right now, she’s without a home.

“I called off ‘sick’ and my main manager hasn’t gotten back to me yet. I have pretty severe mental issues, so I’ve just been doing a lot of couch surfing with friends’ houses and living off of $150/month SNAP,” she explained that times are very tough right now. That’s why she added her Venmo (@H-Ann-Pik23) in one of the updates to her original post.

“Some folks suggested starting a GoFundMe so I could afford to quit my job and still survive in the interim, but I’m not really comfortable doing that as I don’t feel I’m a charity case (yet) to that degree. I do have a Venmo, if anyone’s feeling particularly giving, though I’m not expecting anything obviously—@H-ann-pik23,” she wrote on Reddit.

The OP told Bored Panda that she’s not familiar with what things are like right now at work because she hasn’t “been there in a while,” something that she says she needs to fix.

We also wanted her opinion on what qualities she believes a good manager should have. “The signs of a good manager to me are fairly simple: Clarity, strong leadership, being on top of things, positivity, patience, and honesty. Without those, it’s screwed.”

A while back, we wrote about servant leadership on Bored Panda. It’s the idea that a leader at work embodies empathy, selflessness, and humility. Their focus? Supporting their employees.

Instead of putting their employees down, managers who embody servant leadership as an idea choose to support, motivate, and empower them, lifting them up. Strong leaders are people who are principled, moral, and choose to do the right thing, not what’s popular. They also avoid flip-flopping and changing their decisions.

Here’s what some internet users had to say after reading the story, and how the server responded to them 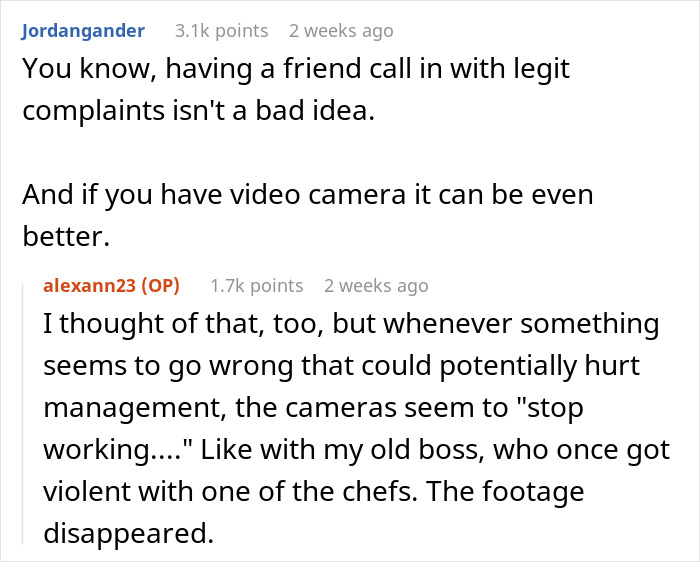 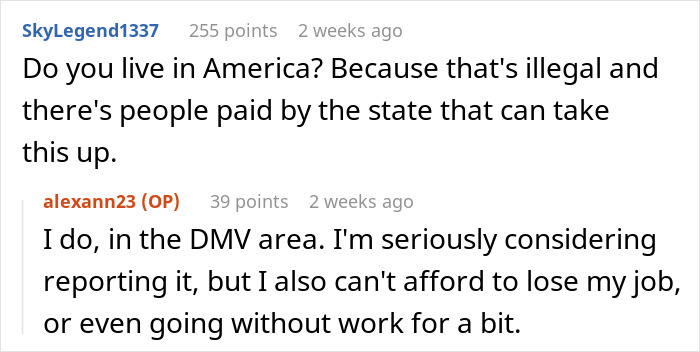 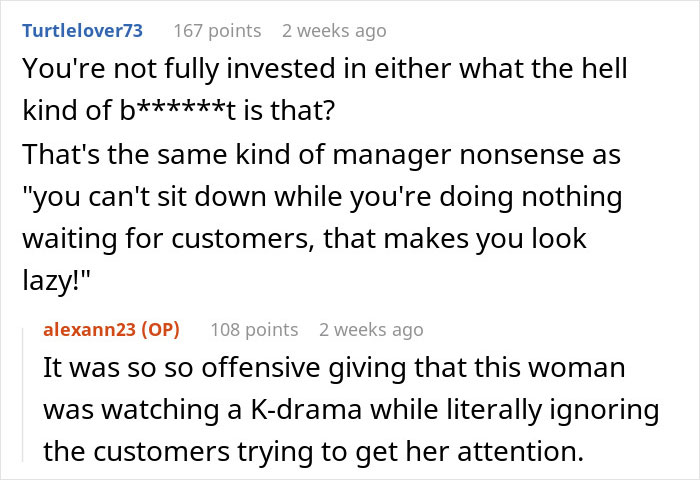 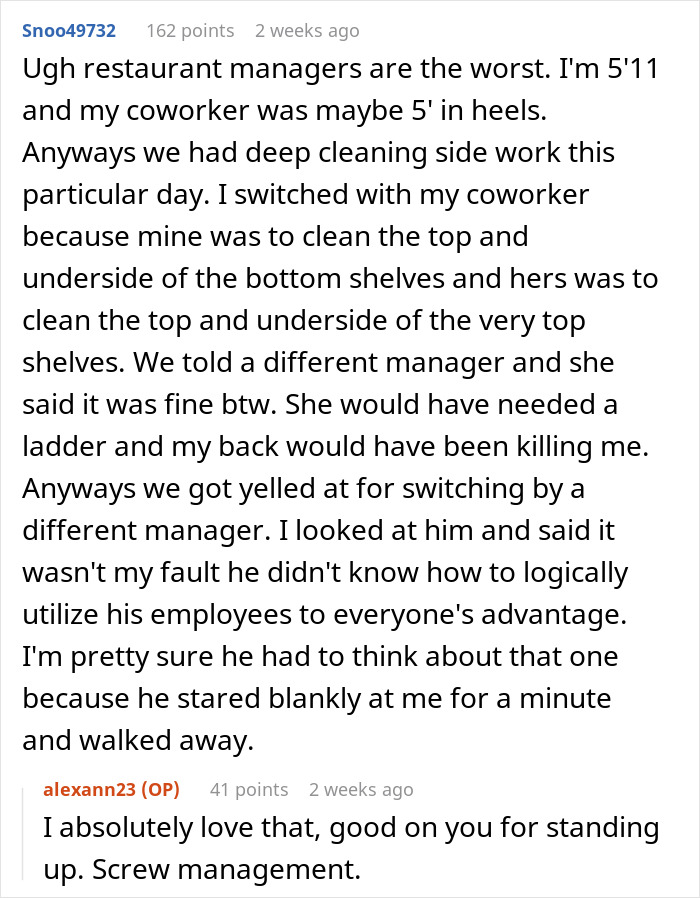 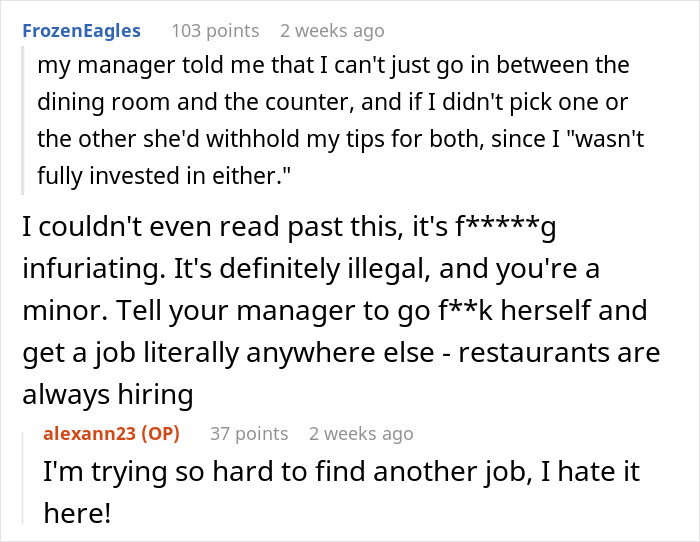 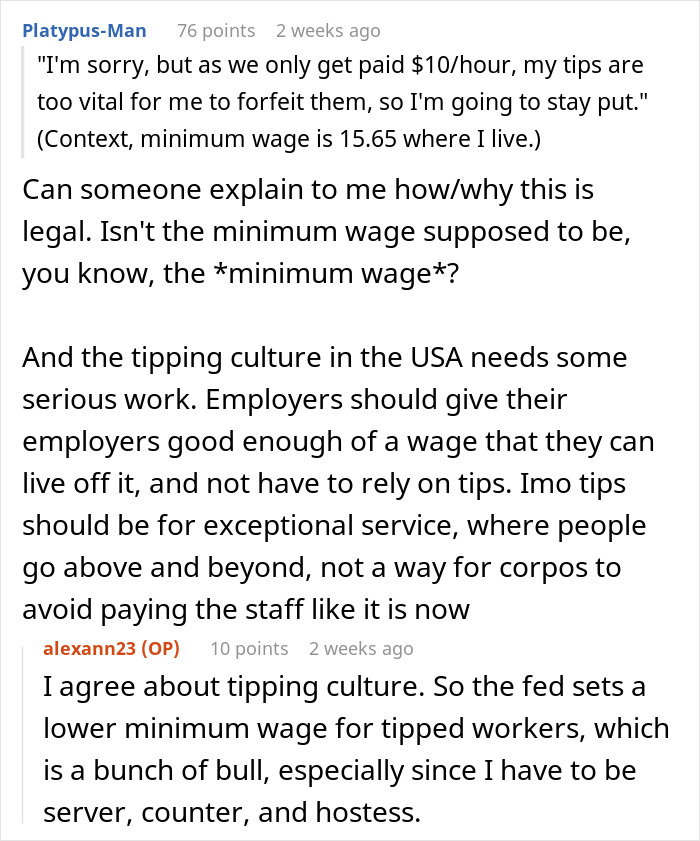 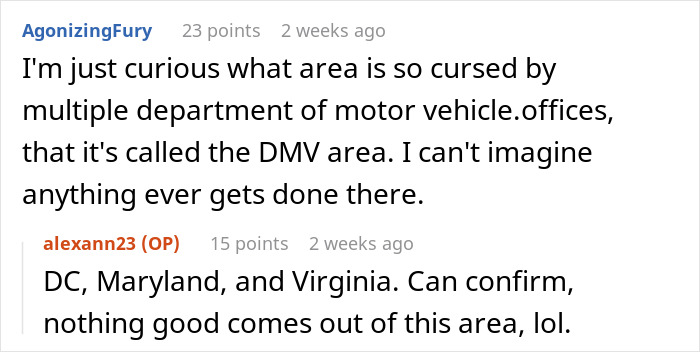 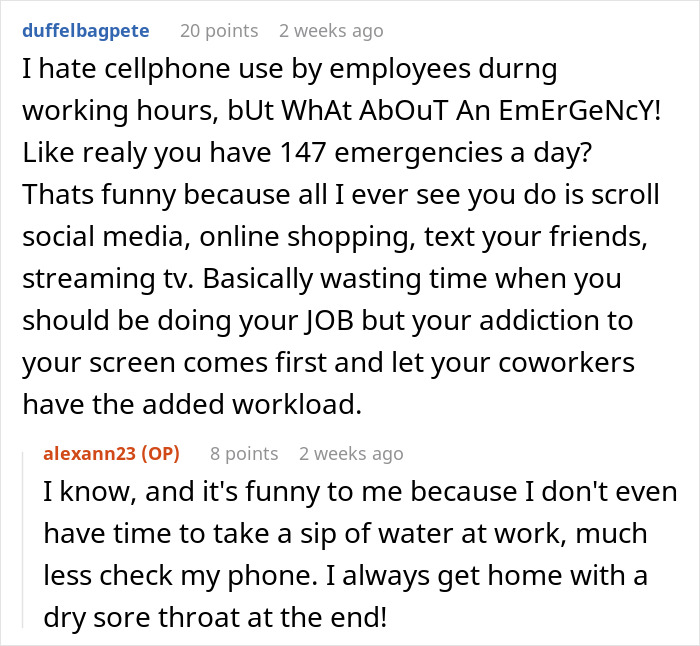 The post Waitress Decides To Maliciously Comply When Boss Tells Her To Stop Running Around So Much, Stays Put When Boss Regrets It first appeared on Bored Panda.