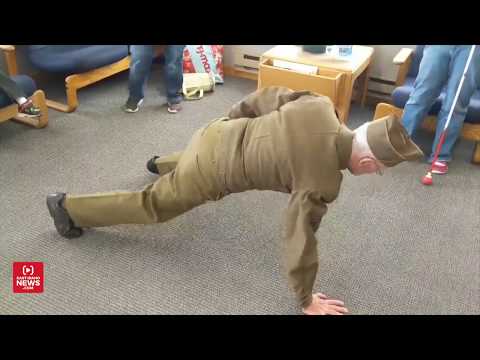 Eugene Andrews, 91, of Idaho Falls, Idaho served in the US Army during World War II. He still keeps his uniform in good condition. It fits him well, too. That’s intentional, as Andrews wants to be ready to serve should he ever be recalled to duty. In this video, Andrews performs one-handed push-ups to demonstrate his physical fitness. East Idaho News tells us about his life:

Andrews was drafted into the United States Army and ended up traveling to Japan for the occupation in the Signal Corps.

“I consider that time in the military a blessing,” Andrews told EastIdahoNews.com earlier this week.

Andrews grew up in Idaho Falls during the Great Depression. He began working at a young age handling cattle before being drafted into the Army. After he returned, he found a job with Andrew Drilling, where he spent 25 years before opening his own insulation company.