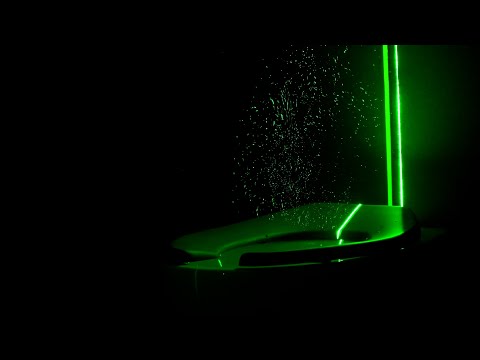 When you flush a toilet, the violence of the water rushing through expels water droplets into the air that are so tiny we can’t see them. But a new study from University of Colorado Boulder shines a light on the phenomenon- literally. Using laser lights and high-resolution cameras, they bring us a visualization of the kind of flush you get in a public toilet. This video involves a new toilet with only tap water in it.

The study found that these airborne particles shoot out quickly, at speeds of 6.6 feet (2 meters) per second, reaching 4.9 feet (1.5 meters) above the toilet within 8 seconds. While the largest droplets tend to settle onto surfaces within seconds, the smaller particles (aerosols less than 5 microns, or one-millionth of a meter) can remain suspended in the air for minutes or longer.

These measurements came from the use of an optical particle counter. Toilets in most homes don’t flush quite so powerfully, but they do expel particles. Closing the lid while flushing helps somewhat, but lids are rare in public toilets. And this is why I moved my toothbrushes inside a cabinet years ago. -via Boing Boing