If the headline made you cringe, shudder, or laugh at the absurdity of it all, then you’re in the right place. You come across some of these stories that make you feel as though you’re part of the middle ages, with epic sword fighting, ale-drinking, plague-fearing, and Christian praying going rampant throughout Europe.

The notion of ‘innocence’ and ‘virginity’ as such are as useful as a burning house in the modern era, however, the values that generations have put on these terms have somehow survived, continuing their tormentous streak of incomprehensible existence, in turn affecting young women worldwide.

One woman decided to share her story and ask for some advice on the r/AmIthe[Jerk] subreddit, after her mom had gone ballistic over her showing her 14-year-old sister how to use a tampon, believing that it would compromise her ‘innocence.’ The internet was quick to respond with their own opinions on the matter.

Make sure you read to the end, consider all viewpoints, and leave your opinion on this situation in the comments below. And if you’re craving more startling content, Bored Panda has an article just for you. Now let’s get into it!

The social construct of ‘virginity’ has been around since the middle ages thanks to Christianity, however, it still continues to impact the lives of women today 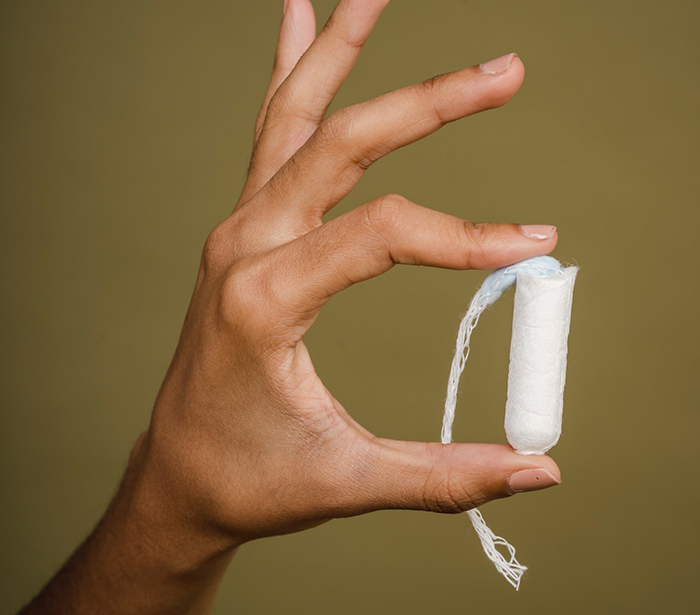 One woman was yelled at by her mother for teaching her 14-year-old sister how to use a tampon, stating that she could have compromised her ‘virginity’ 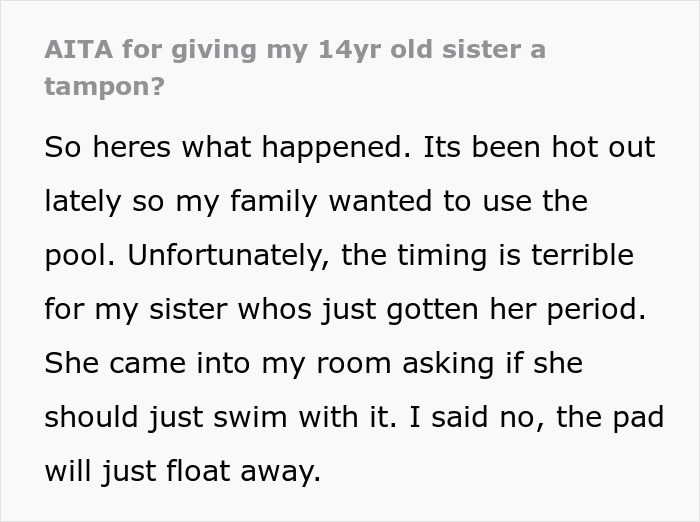 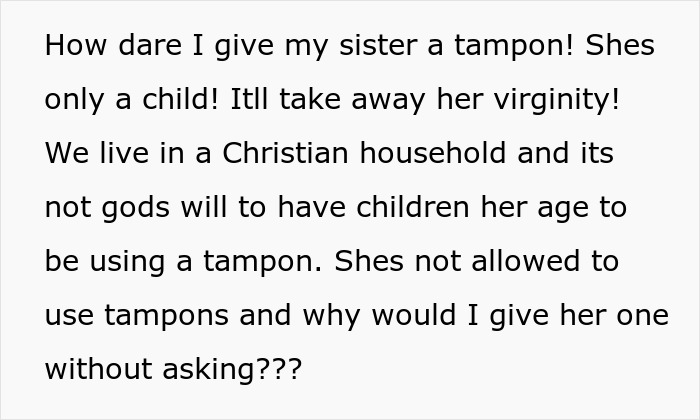 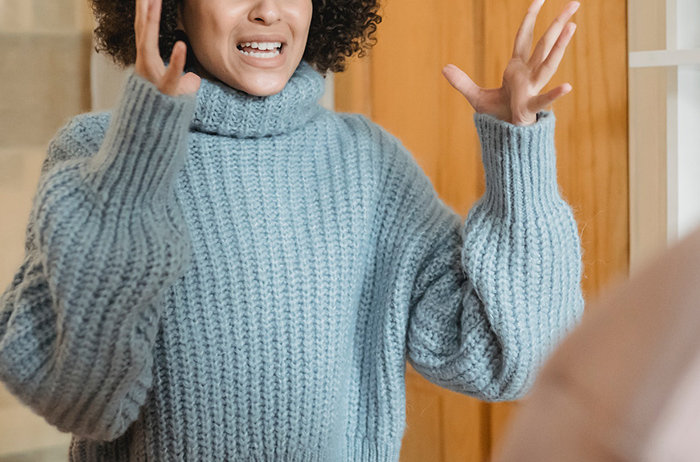 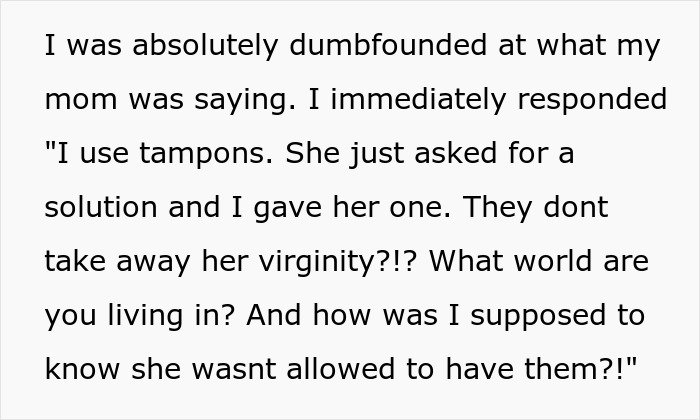 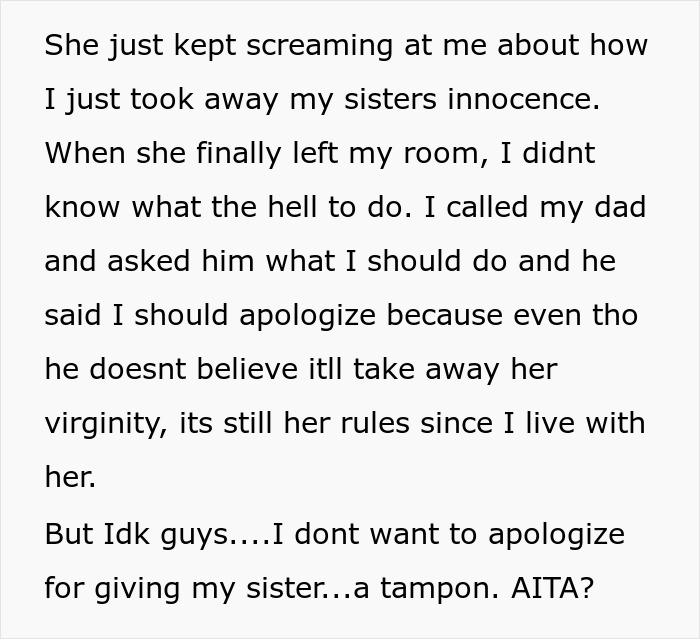 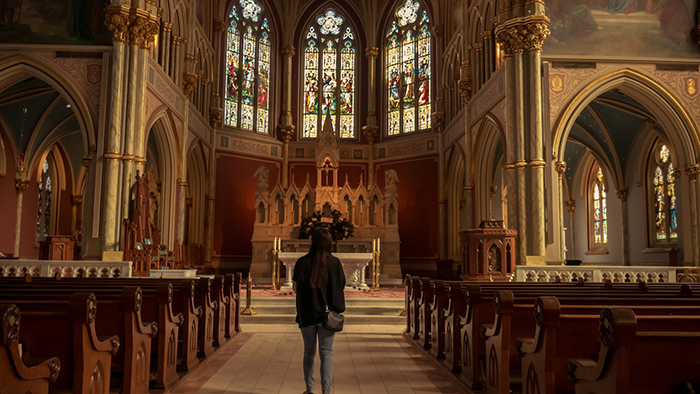 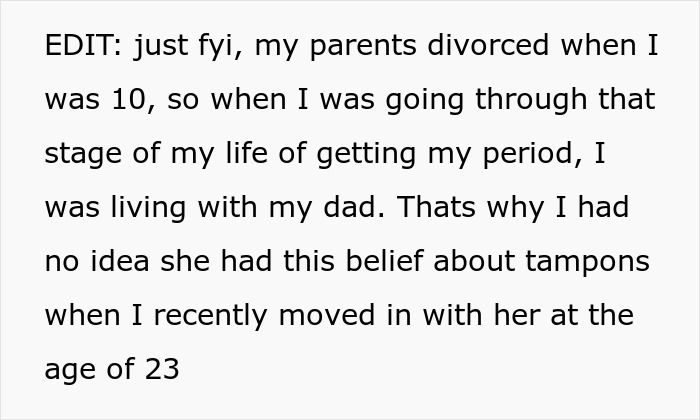 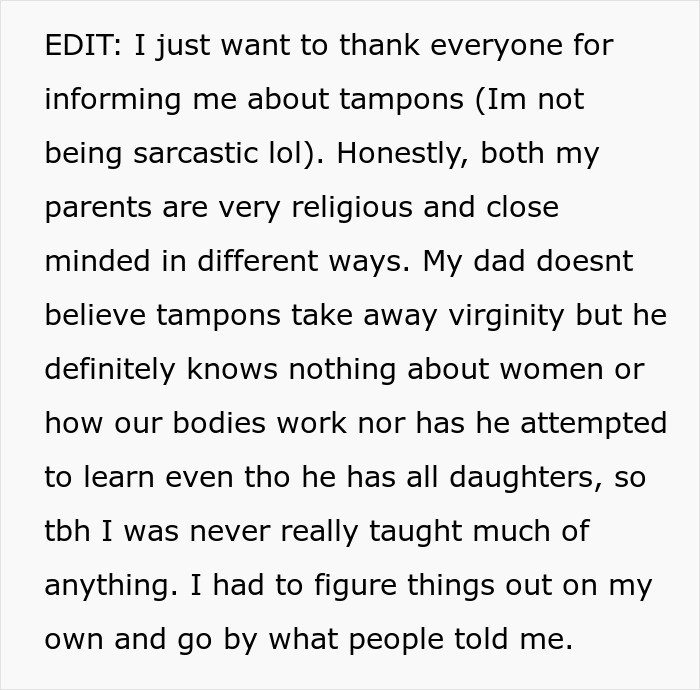 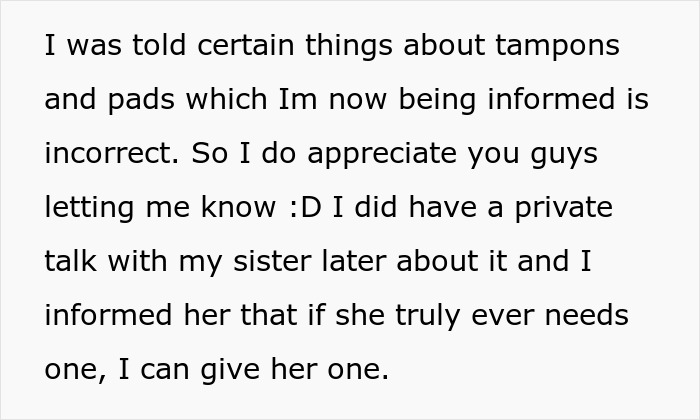 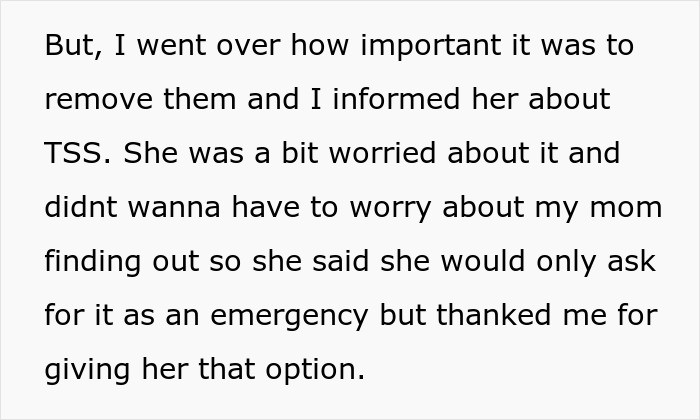 Virginity—the state of never having had sexual intercourse, however, it’s a lot more complex than that, isn’t it? From being a social construct, to having a significant amount of impact upon ethics and morality, the idea of ‘innocence’ is one that continues to plague modern society, all thanks to Christianity.

Although humanity has changed a lot since the middle ages, there are some things that have stuck in the collective consciousness, one of them being this notion of ‘purity.’ There have been a lot of issues raised when it comes to virginity as a whole.

Author and sex educator Dr. Logan Levkoff argues that it is an idea designed to control how and when people (in particular girls and women) engage in sexual activity, yet, truthfully, there is no part of one’s body that is “virginity.”

The closest we get to it, when it comes to women, is the hymen, a bit of mucosal tissue that may partially surround the opening of the vagina, and that in some cases may (but not always) tear and bleed during first sexual intercourse. However, this bit of tissue comes in all shapes in sizes, some tearing them through sports, others being born with no apparent hymen at all.

But putting pure anatomy aside for a second, the whole notion of ‘virginity’ has created an imbalance between men and women for centuries, suggesting one is entitled to sex and another has to “wait.” And when we think of the ever-expanding vocabulary of sexual experiences, can we really say that losing one’s ‘virginity’ is limited to penile-vaginal intercourse? Doubtful.

The internet was left speechless that these sort of discussions are still happening, showing the importance of developing a more fluid understanding of sex as a whole 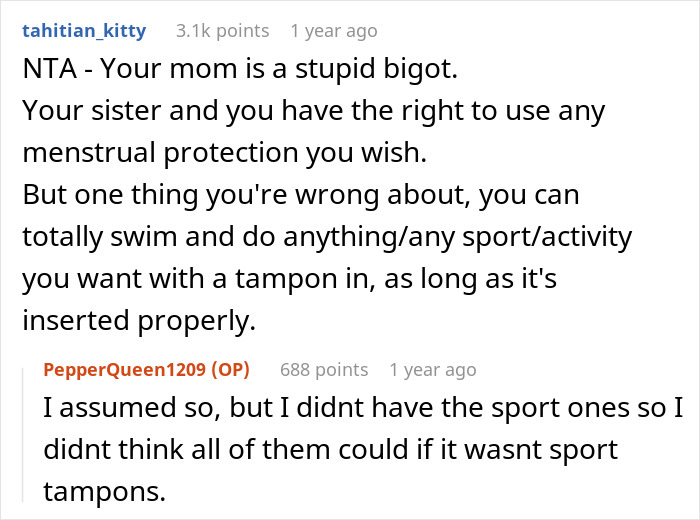 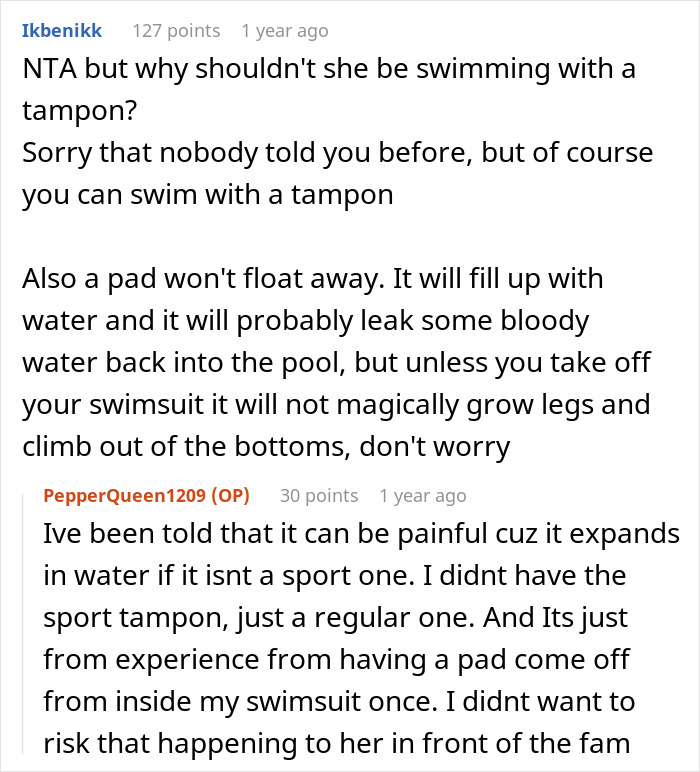 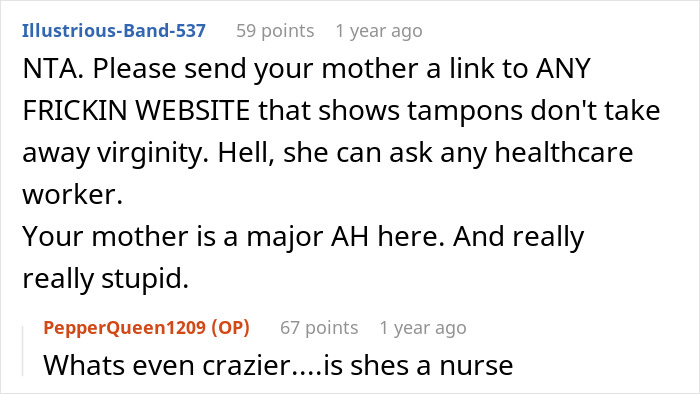 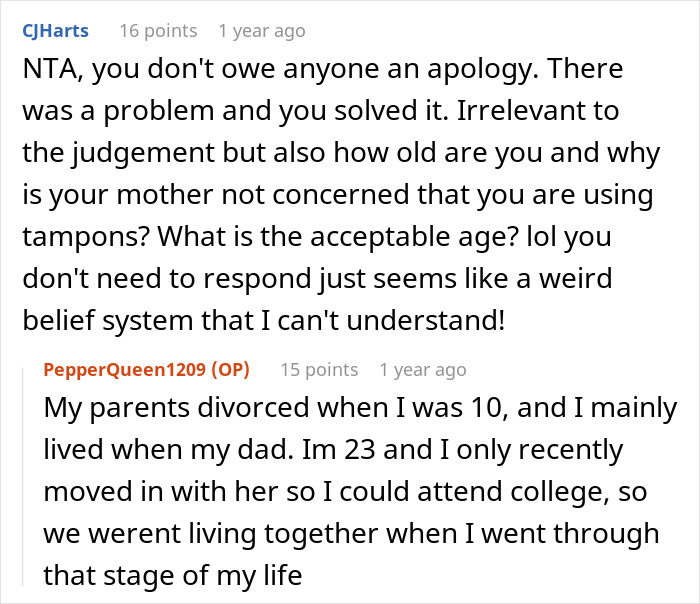 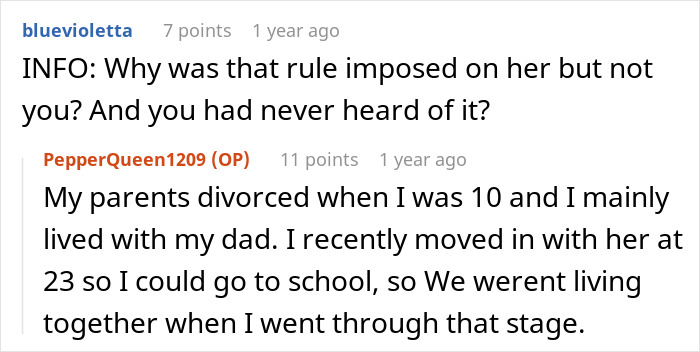 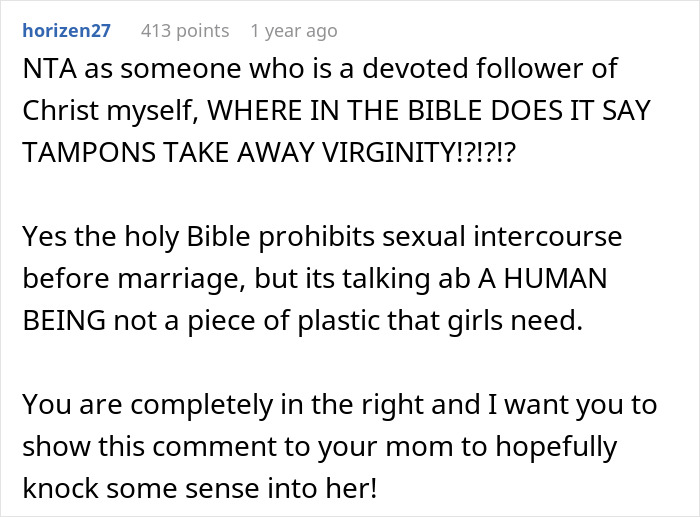 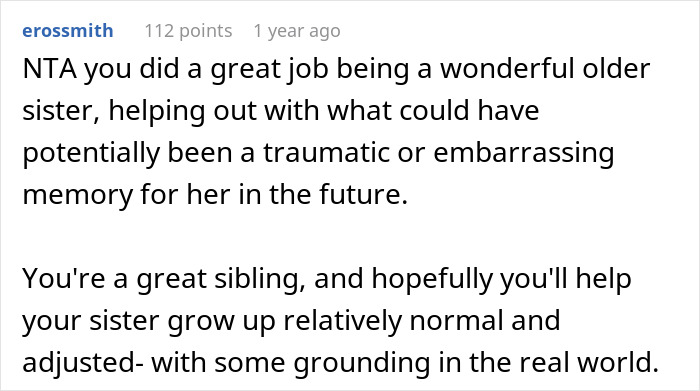 Speaking of language, ‘deflowering’ and ‘popping the cherry’ are just a few terms that make it seem like something is being taken away, almost making it seem like it changes one’s personal or physical value. As Dr. Levkoff explains, historically, the way society’s language, cultural references, and sex “education” frames sexual initiation has been sexist, heterosexist, and often harmful for all involved.

Now that we’ve touched upon some of the base issues and explored a bit of the vocabulary, let’s look at what the mother could have been worried about. If we take the notion that ‘virginity’ solely depends on the hymen, it is no wonder why some women may feel worried about using tampons, in the fear of overstretching and breaking them.

However, most people agree that using tampons does not cause a woman to lose her ‘virginity.’ Tampons may stretch the hymen a little bit, but they don’t usually stretch it open all the way, states Planned Parenthood. Continuing on the discussion, Verywell Family states that ‘virginity’ has to do with sexual activity, not the presence of a hymen or whether or not a girl uses a tampon.

Despite medical evidence, worries about using tampons or “broken” hymens persist, causing unnecessary anxiety and shame for many girls (and parents), leading to the more and more apparent truth that we need to get rid of the social definition of whether someone had sex or not in general.

This is a story full of very interesting notions, however, one thing is for certain—feminine hygiene is health care, and, as states Verywell Family, learning more about their bodies, tampon use, and what ‘virginity’ really means can help girls feel more confident about making the feminine hygiene choices that work best for them.

But that is just the tip of the iceberg of equality. Angella d’Avignon states that while having sex for the first time is a universal experience, the conditions that define ‘virginity’ are socially constructed and have been used to control and exploit women. Sociologist Dr. Laura Carpenter further explains that we are deeply threatened by “the idea that women could just go have sex with anyone that they wanted to, penalty-free.”

As we move toward a more fluid understanding of gender relations and sexuality, virginity is the last bastion of the binary that relegates sex as “inside or outside” the institution of marriage, serving as another means to limit women. All experiences of sex are valid and none of them change our worth as people. Period.

Let us know your thoughts on this, whether you agree or disagree with the internet’s ruling of the woman not being the jerk in this situation. What would you have done differently? Have a good one, see you in the next one!

The post “We Live In A Christian Household!”: Mother Goes Off At Daughter For Compromising Her 14-Year-Old Sister’s Virginity By Teaching Her How To Use A Tampon first appeared on Bored Panda.