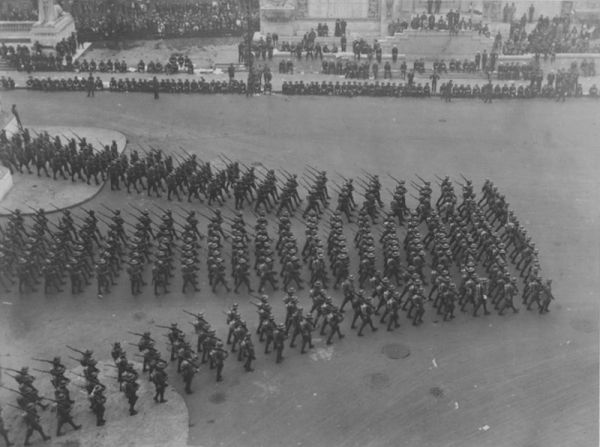 Soon after the end of World War I, the US ratified the 18th Amendment, ushering in Prohibition. Returning US soldiers weren’t all that enthusiastic about it, to say the least. Alcohol had been a part of military life since the American Revolution. As the 1920s dragged on, the army seemed to react to the alcohol ban the same way the rest of the country did: by ignoring it.

Observance of Prohibition in the breech was also common amongst junior officers. While commanding tank battalions and living next door to one another in renovated barracks at Camp Meade, Maryland, Dwight Eisenhower and George Patton avidly partook in the new American pastime of making their own bootleg alcohol. Eisenhower distilled gin in an unused bathtub, while Patton brewed beer, storing it in a shed outside his kitchen. One summer evening there was a sudden noise outside the Pattons’ barracks that sounded like a machine gun, followed by a series of soft booms. As their cook began screaming, Patton instinctively dove for cover. When they realized it was merely the beer bottles exploding from the heat, he rose, sheepishly explaining how much it had sounded like hostile fire. His wife Beatrice “laughed and laughed and called him ‘her hero’ and he got very red.” Omar Bradley commanded an infantry battalion in the 27th Infantry Regiment in the 1920s and took advantage of the Hawaii Division’s leisurely pace of duty to play golf several times a week. At the end of one round, the 33-year-old teetotaler drank his first glass of whiskey, which he liked enough to make “a habit of having a bourbon and water or two (but never more) before dinner” for the rest of his life.

Rating 'What a Magnificent Body of Men Never to Take Another Drink': The U.S. Army and Prohibition is 5.0 / 5 Votes: 1
Please wait...
Loading...
Related articles