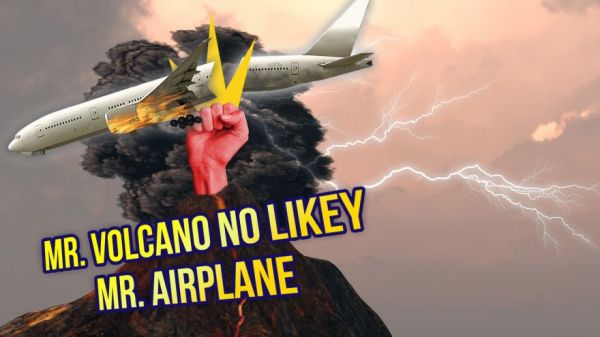 In 1982, a Boeing 747 was being flown by British Airways from Kuala Lumpur to Perth on one leg of a London to Auckland flight. They were well over the ocean when strange things started happening. The passenger compartment started filling up with blue smoke, even though there was no fire detected on board. Then the crew started seeing bluish flickering lights. They recognized St. Elmo’s fire, but had never seen it so strong.

Within two minutes, the situation suddenly went from strange to alarming as engine No.4 surged and flamed out. The crew immediately performed the engine shutdown drill, cutting off the fuel supply and arming the engine fire extinguishers just as they had been trained. But less than a minute later engine two also flamed out, followed almost immediately by engines one and three. The crew could scarcely believe it: all four engines had failed almost simultaneously – something which had never happened before on a 747. The mighty airliner, with 263 people aboard, had suddenly become the world’s biggest glider.

What the crew didn’t know was that they had flown through a cloud of volcanic ash, thrown up by the erupting Mount Galunggung in Indonesia. Weather radar doesn’t detect volcanic ash clouds. The ash did even more damage, as the plane’s interior lost its pressure and the windshield became opaque. Should they drop to a lower altitude so they could breathe, or try to maintain altitude to make it to the nearest airport in Jakarta? How would they land if they can’t see? Would they have to land a 747 on the water? Read the story of British Airways Flight 9 at Today I Found Out.