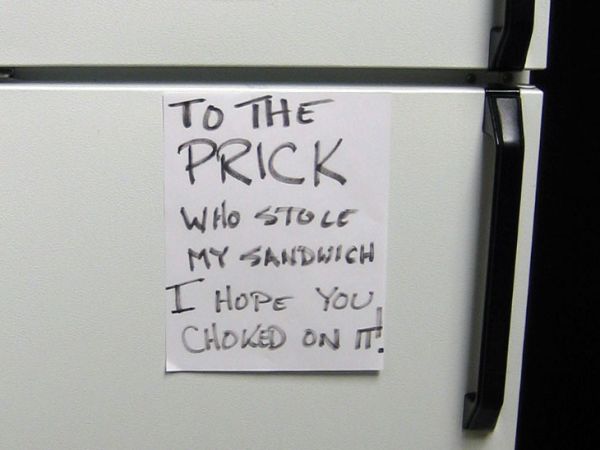 Any workplace with several people in the same place will eventually confront a lunch theft. The victim will be upset, not only because they have no lunch, but also because they feel violated, and suddenly they cannot trust the people they spend do much time with. Katie Heaney’s lunch was stolen. She was angry, of course, but she also offered amnesty if as he could talk to the perpetrator and find out what went on in their mind to cause the theft. The lunch thief was not found, so she went online to find someone who had stolen co-worker’s food and talk to them about it. She wanted to know what made a lunch thief different from the rest of us.

Before I called Rob, I expected — hoped, really — that our conversation would reveal something sinister about his personality, perhaps something tellingly psychopathic. But Rob seems like a nice guy. He expresses remorse for his actions, sounding genuinely devastated when I ask him to imagine his victims gazing sadly into the refrigerator. “People get hurt, I guess,” he says. “Knowing you have that soda there in the fridge at 3 or 4 in the afternoon when you really need it … that’s gotta suck for someone else [when it gets taken].” I imagine him here looking in the mirror and not recognizing the person he sees. “Now I think about it, yeah it’s pretty bad of me to do that,” he adds. “I’m not a horrible person, but clearly I have ethical issues.

At this point in the conversation, I feel bad. And after talking to Art Markman, a professor of psychology and marketing at the University of Texas at Austin, I know why: I may never have stolen a lunch from a co-worker, but I am no better than Rob. I’m simply bad in a different way.

It appears to be a simple breakdown of the Golden Rule. Lunch thieves do not seem to imagine themselves in the place of the victim. Read how Heaney learned about lunch theft and other everyday transgressions at The Cut. -via Nag on the Lake