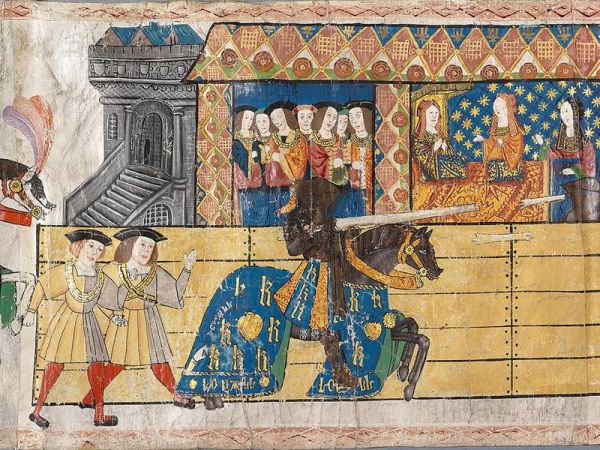 We learned that the ancient Olympics were a big deal in Greece, then were adopted by the Romans, and died out as the Roman Empire turned to Christianity. While it’s true that the name fell out of use, sporting competitions inspired by the Olympics became a part of life throughout Western civilization.

In the West, chariot racing died out rather quickly, but beginning in the second half of the 11th century, knightly tournaments were the spectacle of medieval Europe. At their height, beginning in the 12th century and continuing through at least the 16th, participants would, like their ancient Olympic forebears, travel a circuit of competitions across Europe, pitting their skills against other professionals. (The depiction in the 2001 Heath Ledger film A Knight’s Tale was not far from reality.) In these competitions, armored, mounted men would try to unseat their opponents using lance and shield, or battle on foot with blunted (but still dangerous) weapons to determine who was the best warrior, all for an enthusiastic crowd.

And indeed, these were performances. Lionized in contemporary fiction, and discussed repeatedly in historical chronicles from the period, one scholar has suggested that these were often accompanied—much like the modern Olympics—with theatrical opening and closing ceremonies. An autobiographical set of poems from the 13th century, for example, had the knight Ulrich von Liechtenstein perform a chaste quest for a wealthy (married) noblewoman. Dressed as a woman, specifically the goddess Venus, Ulrich travels across Italy and the Holy Roman Empire defeating all challengers in jousts and hand-to-hand combat.

The legacy of such tournaments continues today, with sports offering nations and individuals an opportunity for fame, glory, and one-upmanship without killing or colonizing each other. Read about the medieval tournaments that grew out of the Olympics at Smithsonian. -via Strange Company