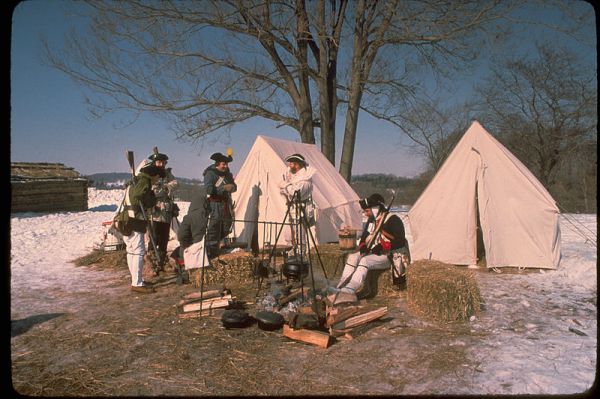 It’s true that an army moves on its stomach, since troops who aren’t fed won’t be able or willing to fight. While there is plenty to complain about in modern-day MREs and the C-rations that came before, those are luxuries compared to what was fed to soldiers of the American Revolution. The rebels had no government infrastructure behind their supplies, but they did the best they could. At the beginning, the Continental Congress declared how much of different foods each man should be allotted, and Washington ordered that each soldier carry two days worth of provisions. But as the war dragged on, food was harder to come by.

In situations when rations were scarce, which was more often than not, many Continental Army soldiers had to resort to subsisting on what was known as biscuit, fire cake, or hardtack. This simple flour and water dough was baked into hard, flavorless cakes that were often so dry that soldiers had to soak each bite in water, broth, or tea in order to eat it. If Continental soldiers were lucky, the mixture wouldn’t be absolutely ridden with insects. They often weren’t.

The supply situation got so bad that soldiers were impelled to steal food from civilian settlements. The British had their own problems with food supplies as well. Read about the difficulties of getting enough to eat during the American Revolutionary War at The Drive. -via Fark