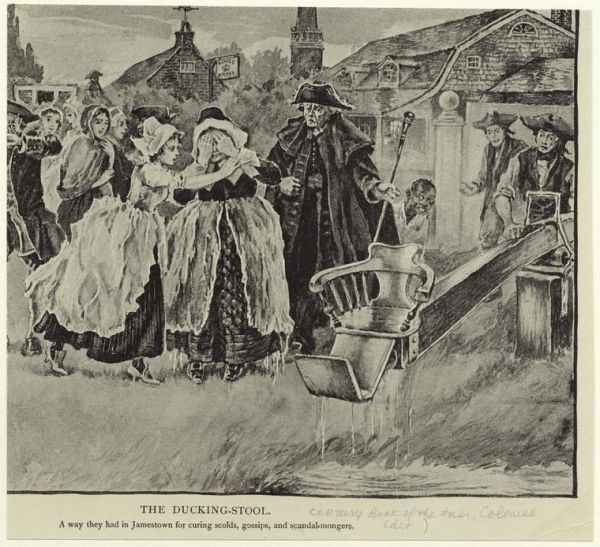 We’ve all encountered dunking booths at the county fair, in which you pay money for the chance to drop a local celebrity into a tank of water. Getting dunked is a volunteer position, usually to raise funds for charity. But between the mid-16th and early 19th centuries, it was a sentence used to punish women for crimes such as prostitution, adultery, making bad beer, or “scolding,” which could mean insults, gossip, or just plain talking too much. They spelled it “ducking” instead of dunking back then, and it was a public spectacle meant to humiliate the woman and serve as a warning to others. However, it could be deadly.

Communities across England, and also in Scotland and colonial America, had a ducking stool, a chair with a lever or pulley that could be raised and powered into a river or pond. The “scold” was strapped to the chair and ducked into the water as many times as local authorities deemed proper according to the severity of her crime. The message was clear: women should be silent and remember their place. Ducking continued until 1809, but the crime of being a scold was only abolished in England in 1967! Read about the crime of scolding and the practice of ducking at Smithsonian.