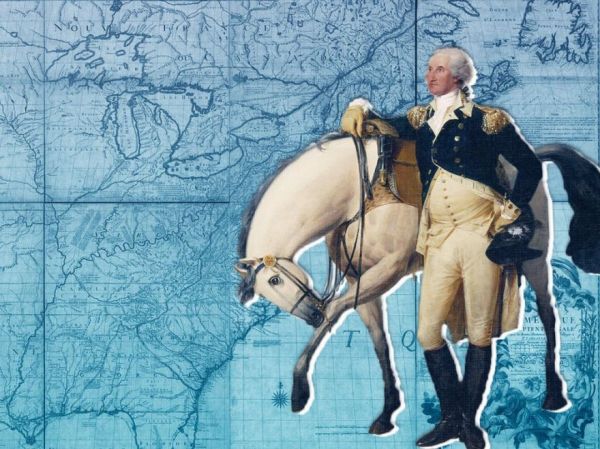 We all know George Washington, Father of our Country, Commander of the Continental Army which defeated the British Empire to create the first modern democracy. He was the most famous and most respected man of his time among the 13 states, and so Americans elected him to the presidency twice. But do you recall exactly what Washington did while he was in office? He had his work cut out for him, as the young nation’s government was fairly unorganized, and the states worked as if they were all separate countries. Washington went to the people, to sell them on the idea of putting “United” before “States.”

Washington took his show on the road in the spring of 1789. Over the span of two years, he visited all 13 original states (14 if you count Maine, which was then part of Massachusetts), traveling on horseback and by carriage along rutted dirt roads and over rising rivers. The president often donned his magnificent Continental Army uniform and rode his favorite white stallion into towns, where he was greeted by cheering citizens. Along the way, he communicated his hopes for the new nation and how he needed everyone’s support to make this vision reality.

“It was awe inspiring,” Philbrick says. “Washington was seriously the only one [who] could have sold the concept to the people. Not only was [he] able to unify us politically, he was able to unify us as a nation. Instead of saying our state is our country—as was customary back then—we were saying the United States is our nation. We take that for granted today, but it wasn’t that way when Washington took office in 1789.”

Get an idea of how the new nation came together under the leadership of Washington on his road trip at Smithsonian.