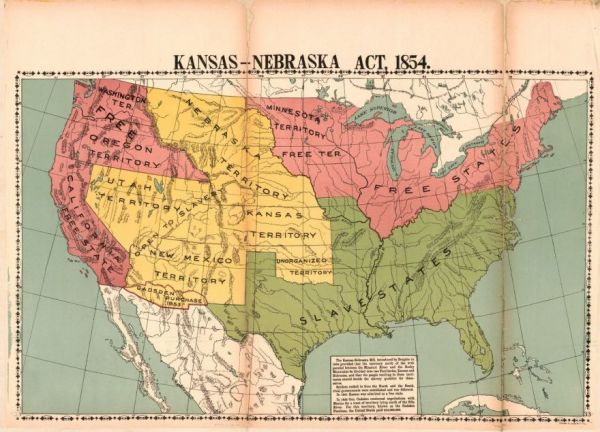 In the 1850s, political forces were splitting the US in the lead to the Civil War. Abolitionists were campaigning against slavery, people were reading Uncle Tom’s Cabin, and women were organizing for the right to vote. Meanwhile, the federal government was trying to deal with the vast expanses of land that the US owned, but had yet to control.

It was in this divided atmosphere that the May 1854 Kansas-Nebraska Act opened the Kansas and Nebraska territories to settlement and eventual statehood. The assumption was that Nebraska Territory would become a free state, while Kansas, under the sway of its pro-slavery neighbor Missouri, would become a slave state. The Act infuriated Northerners because it undid the Missouri Compromise of 1830 and allowed for the expansion of slavery.

But the assumptions of the Act were disrupted by the social movements and civil rights discussions occurring in New England. An organization called the New England Emigrant Aid Company hatched a bold plan to transport New England settlers to the open hills and plains of Kansas Territory in 1854 and 1855, for the purpose of voting for Kansas to become an anti-slavery “free state.” In line with the ideals of the American Renaissance in New England, the principal founder of the Company, Eli Thayer, wrote that its goal was “to go and put an end to slavery.”

Thayer wanted to establish as many New Englanders as possible in Kansas before the Kansas-Nebraska Act was signed a year after its passage. It wasn’t easy, as travel was arduous, and passing through pro-slavery Missouri was downright dangerous. Read about the Yankee emigrants who settled Kansas at Zocalo Public Square. -via Damn Interesting