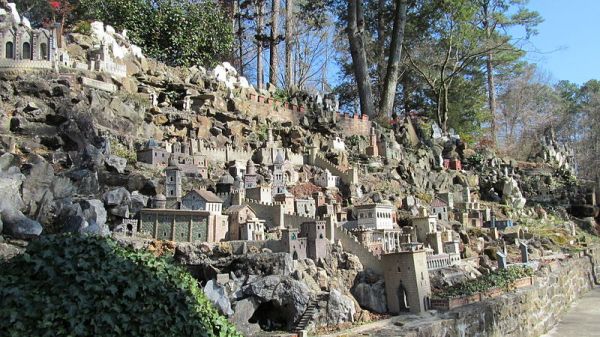 In 1891, 14-year-old Michael Zoettl was recruited to become a Benedictine monk, and was sent from his home in Bavaria to Cullman, Alabama, to live at St. Bernard’s Abbey. Now called Brother Joseph, he studied to be a priest until an accident left him so hunchbacked that his superiors decided he would never have his own parish. Zoettl labored at the abbey, and filled his free time making miniature grottos.

Using simple hand tools and found objects – bits of broken pottery, shells, leftover tiles, marbles, chicken wire – he branched out from tiny grottos into a model of the city of Jerusalem, which he installed in the monastery’s garden in 1912. Originally meant just for the resident monks, Little Jerusalem soon attracted curious tourists. In fact, so many visitors arrived that the abbot told Zoettl he had to quit his little hobby because it was disturbing the monastery’s operations. Zoettl asked permission to move his creation to an old quarry on the grounds but was denied.

Eventually, the monastery embraced the tourism, and Little Jerusalem was moved and expanded. Brother Joseph worked on it until his 80s. Read the story of Little Jerusalem and the man who dedicated his life to it at Messy Nessy Chic.