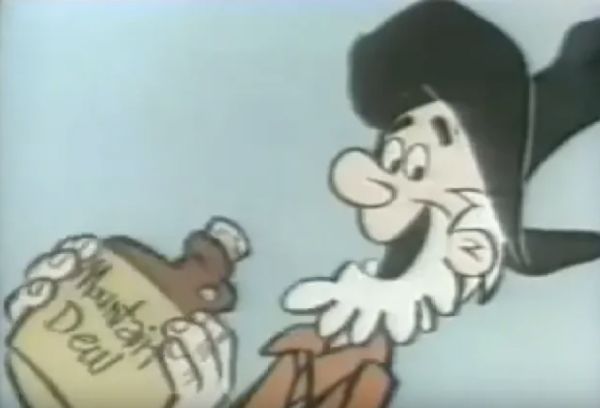 The words Mountain Dew immediately conjure up the image of the highly-caffeinated fluorescent yellow soft drink consumed by video gamers and Kentuckians. But the term “mountain dew” was around a long, long time before the soda was launched in the late 1940s. It meant illegal corn liquor, or moonshine. Except in the British Isles, where it was the name of two brands of Scotch whisky. The makers of the carbonated soft drink Mountain Dew dealt with some confusion between their drink and moonshine to the point where a raid was conducted on a Mom-and-Pop business that was distributing legitimate Mountain Dew syrup in 1951. There was even talk of changing Mountain Dew’s name to avoid the mistake.

However, when Pepsi bought Mountain Dew in 1964, the company went whole hog in embracing the soft drink’s hillbilly roots and the name that evoked high-octane homemade liquor. That advertising built a juggernaut out of the soda pop. Read how that happened at Mel magazine.