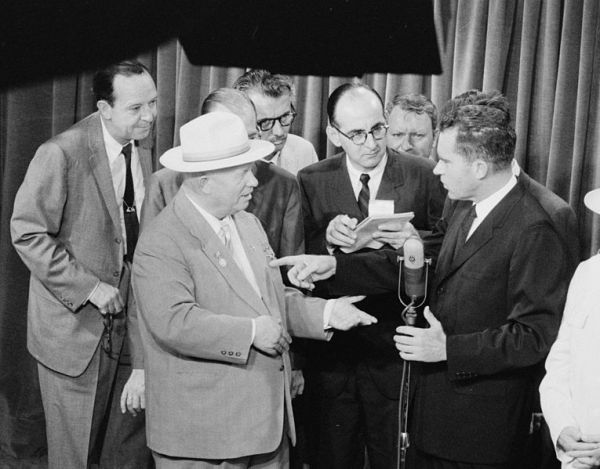 They didn’t set out deliberately to do it, and they never engaged in naval warfare, but at one time, the Pepsi Cola company once had 17 diesel attack submarines and a fleet of oil tankers. That made them, at the time, the sixth-largest navy in the world. It was part of a convoluted deal with the Soviet Union, which started when Pepsi marketing executive Donald M. Kendall managed to meet Nikita Khrushchev through his good friend, then-vice president Richard Nixon, at a cultural exchange exhibition.

Against his company’s objections, Kendall, who had ambitious plans to expand Pepsi’s overseas markets, had agreed to sponsor a booth at the Exhibition, where he provided Pepsi-Cola that had been bottled both with American water and with local Russian. Recognizing the potential publicity coup, Kendall begged his friend Nixon to help him get a soda into Krushchev’s hands.

It went like clockwork. It was a hot July day in Moscow, and as the two toured the Exhibition, Nixon steered Krushchev towards Pepsi’s booth, where Kendall was waiting to offer him a nice cold Pepsi. As photographers flashed, the Soviet Premiere tried both the American and the Russian versions, and promptly announced that the Pepsi made with Moscow water was better. The photos of the communist Khrushchev drinking capitalist Pepsi went around the world. It was an advertising coup.

How did that lead to Pepsi owning a fleet of ships and submarines? The rest of that story is at Hidden History. -via Digg