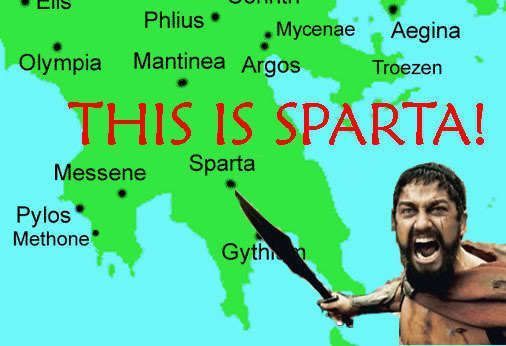 Sparta was a dominant military city-state in ancient Greece for about 500 years. It was most notable for winning the Peloponnesian War (431-404 BCE) against Athens. Eventually, the Roman Empire came along and enveloped Sparta in 146 BCE. But the Romans knew of Sparta’s legendary history, and took advantage of it.

The Euryclid Dynasty capitalized on this legacy by reorganizing their city into what was essentially an ancient Roman tourist trap.  The city had most of the things Romans enjoyed such as games, gladiatorial combat, theater, baths, brothels, and taverns. Like most other tourist hotspots there was probably a proliferation of tacky souvenirs and the like.  However, what interested the Romans the most was Spartan culture, especially their strange militaristic warrior traditions.  Ancient Spartan traditions became a show for wealthy Roman patricians who paid good money to see them. The hottest show in town was the Spartan coming of age ceremony held at the Temple of Artemis Orthia were a Spartan boy would be whipped to near death, at which point if he survived he would be considered a man and a warrior.  The Spartans rebuilt the temple into a theater so that large audiences could view the ceremony.  Because seeing children being beaten to near death is the height of entertainment amiright!

Read more about what happened to Sparta after its glory days at Lock, Stock, and History. -via Strange Company

The Fluctuating Truth of Documentary Images