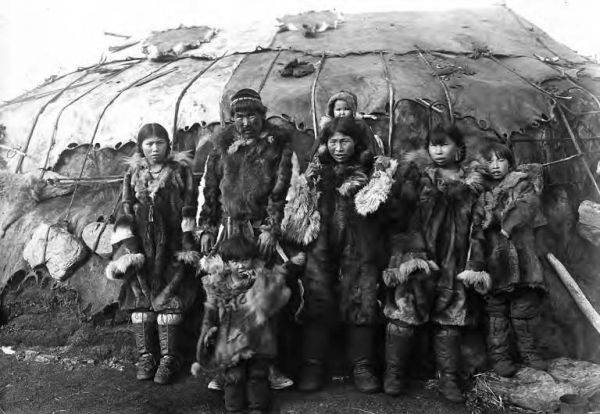 The Bolshevik Revolution made Russia a communist nation, but it was a few years later in 1923 that the Soviets arrived to organize the upper eastern reaches of the country like Chukotka, the peninsula that extends out into the Bering Strait. Here lived the indigenous Yupik people, who hunted walrus, and the Chukchi reindeer herders. The Yupik were somewhat open to the communist way of life, and formed collectives to produce a steady supply of walrus meat. The Chukchi were less receptive. Tikhon Semushkin was a teacher and an ardent communist organizer who traveled to far eastern Siberia to organize indigenous people around the new system.

The Chukchi were not interested in Semushkin’s description of how “all our people were making a new life, just as Lenin said.” In his memoirs, written some years after arriving in Chukotka, Semushkin describes trying to persuade a Chukchi elder named Tnayrgyn to send nomadic children to boarding school at the cultbaza, or culture base, in the Soviet settlement of Lavrentiya. Pointing to a portrait of Lenin, Semushkin explained “how he that we see hanging on the wall taught that all peoples will live well only when they themselves make their own lives,” by learning to read. Tnayrgyn responded, “What you say is nonsense. Doesn’t he know we make our own lives for ourselves?”

Tnayrgyn’s was a common sentiment among the Chukchi. In 1927, the secretary of the reëstablished Chukotka Revkom tried to organize elected leaders among the Chukchi, but he was told that they had no “chiefs” and were “all equal,” at least over time. And no one wanted to discuss reindeer. The Chukchi, who had begun domesticating reindeer hundreds of years before the Soviets arrived, knew that the animals helped increase the native human population and boosted political power, allowing individuals to amass wealth in herds of thousands. “The Chukchi received me warmly and willingly talked about general, abstract themes and topics that did not directly concern their livestock,” a Revkom committee member reported. “But when issues began to touch on the deer and reindeer herding, the Chukchi became wary and stopped talking.”

Resistance to communist life led to violence and decades of suffering for the Chukchi, and the vast destruction of their reindeer herds. Read about that struggle at The New Yorker. -via Damn Interesting