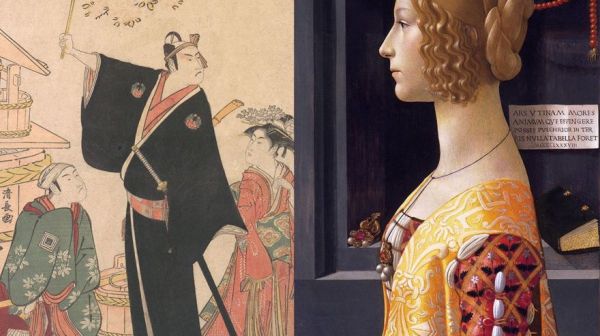 Through most of history in general, rich people wore nice clothing and poor people wore what they could afford. But sometimes, an ambitious person from a lower social station could become wealthy and dress in expensive garments. This wouldn’t do at all, as it upset the ruling class, who preferred to be identified as separate from the masses. Therefore, in different places at different times, sumptuary laws went into effect to codify who could wear what kind of clothing, in order for everyone to tell what social class one belonged to. China’s Ming dynasty tried to encode what everyone would wear. It worked for a while.

As time passed and commerce grew, violations increased. Wealthy commoners dressed in fabrics and styles supposedly reserved for nobler classes. They scorned plain silks and adopted forbidden brocades. They wore off-limits colors, including dark blue and scarlet. They sported gold embroidery. They bought hats and robes that were formally restricted to court officials. “Customs have changed from generation to generation,” complained a Ming scholar, writing in the late 16th century. “All people tend to respect and admire wealth and luxury, competing for them without considering the bans of the government.”

Nor were commoners the only offenders. Officials and their families dressed above their station. The sons of nobles, themselves in the lowly eighth rank, habitually donned the dress reserved for their high-ranking fathers. “They wear dark brown hats and robes patterned with qilin,” a dragon-like creature with cloven hoofs, “tied with golden ribbons, even when they live at home or have been dismissed from official positions,” complained another Ming writer. Emperors themselves undermined the rules too, he observed, bestowing robes on favorites without regard to whether their status merited the design.

As they say, dress for the job (or social class) you want, not the one you have. Meanwhile in Italy, legal dress codes had to do with keeping people from showing off, which didn’t work as intended, either. Virginia Postrel looks at the rise and fall of sumptuary laws at Reason magazine. -via Digg