Today I’m finally retiring my longest-lasting pair of work pants, Carhartt’s Washed-Duck Double-Front Work Dungaree (style #B136). These have been worn almost every day of fall and winter for the past four years, and they’ve served me well. Here’s what they looked like new, on the catalog model: 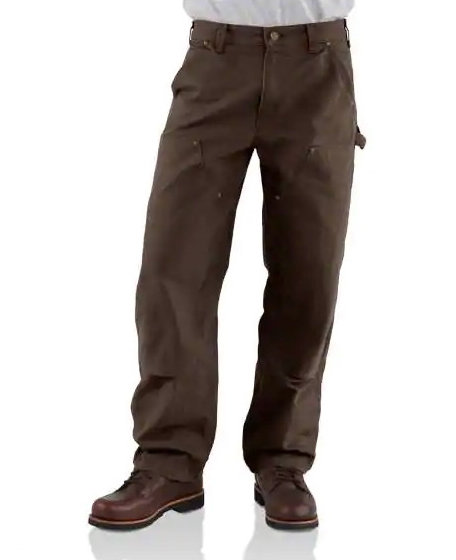 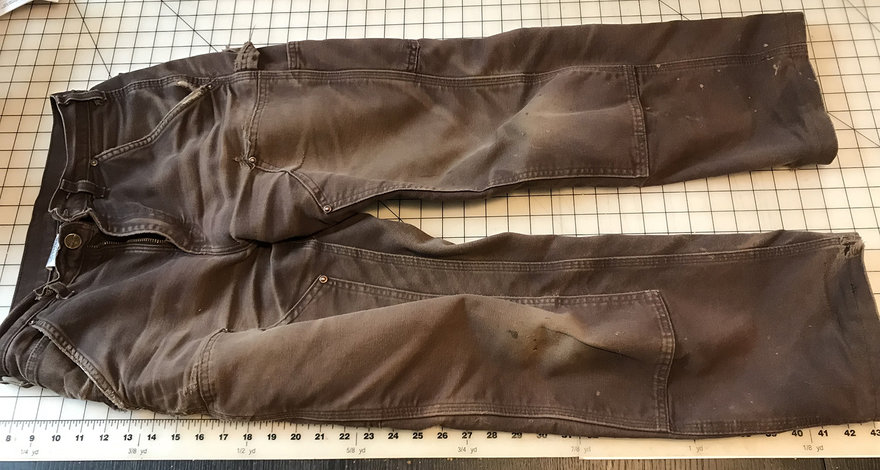 They don’t seem like they’re ready to be retired, but I’ll get to that in a minute. First I want to go over what the failure points are, and if they could possibly be addressed by design.

The Achilles Heel of these pants isn’t near the heels at all, but on the front pockets. The daily wear of a pocket knife clip on the right-hand pocket, and occasional wear from a tape measure clip on the left, have frayed the edges. 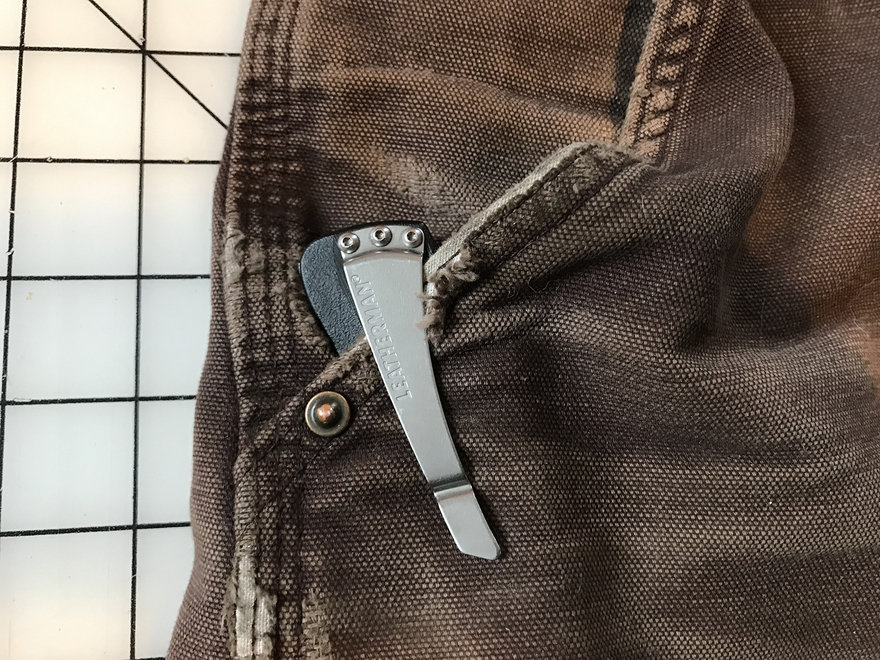 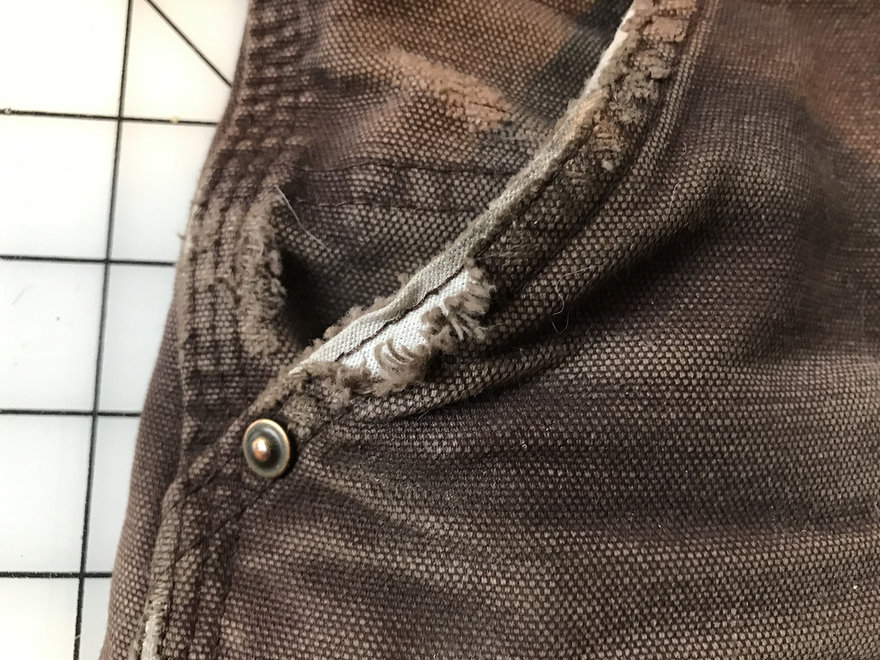 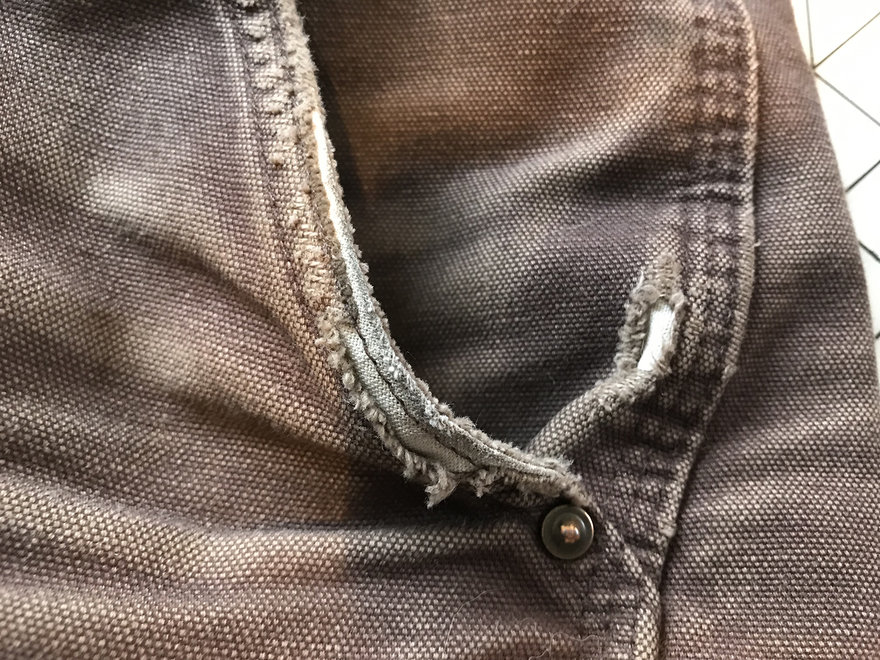 The inside of the pocket hems show similar wear. 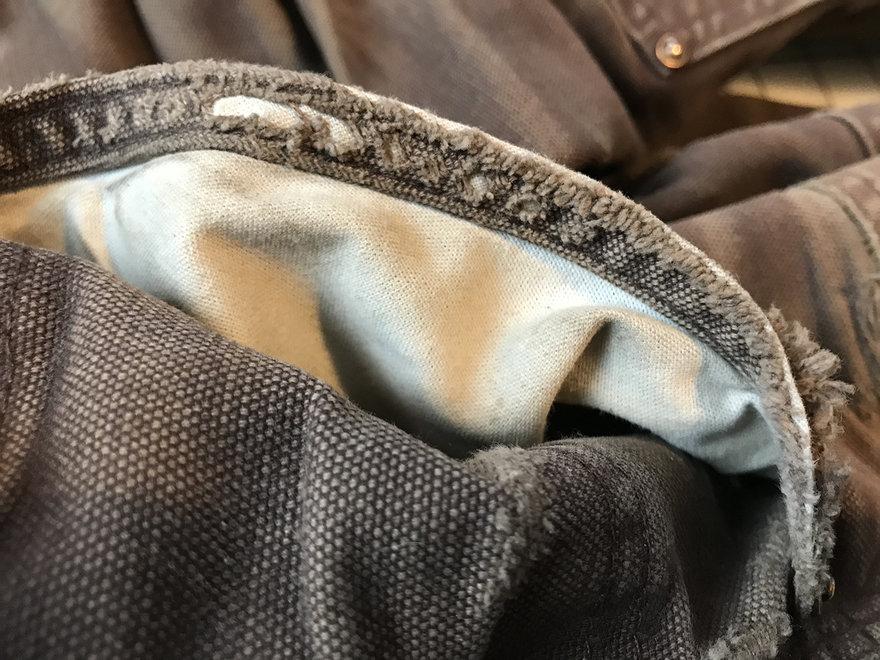 However, note that while the outer layer of fabric has given way, the stitching has not failed and remains intact. 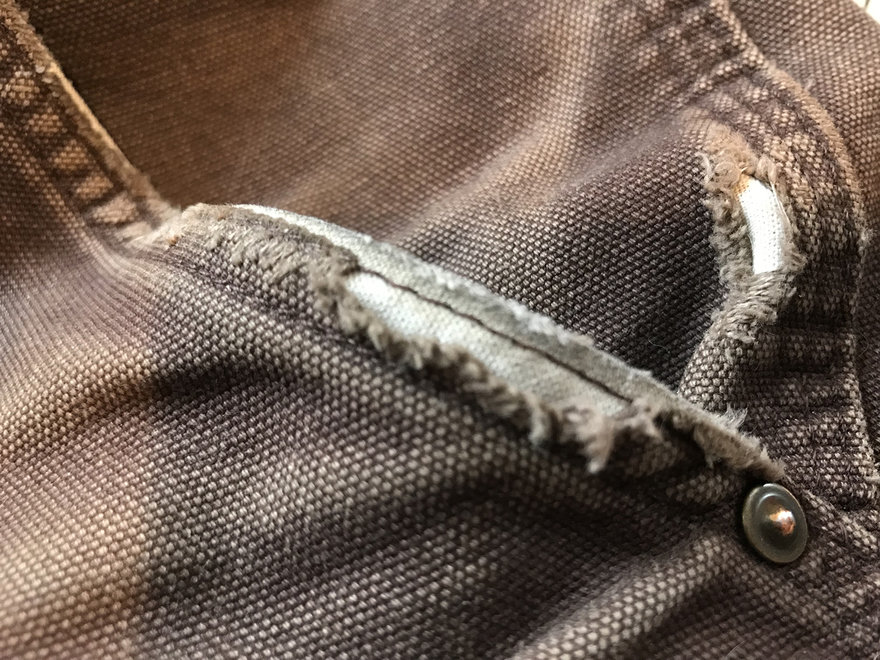 Perhaps the pockets could be hemmed in something more durable. If I never had to wash these, I might try hacking some kind of leather hem onto them.

The belt loops, including this one here that I always have a carabiner hanging from, show minimal fraying. I call this good construction, but those who wear a belt daily (I don’t) might have different opinions. 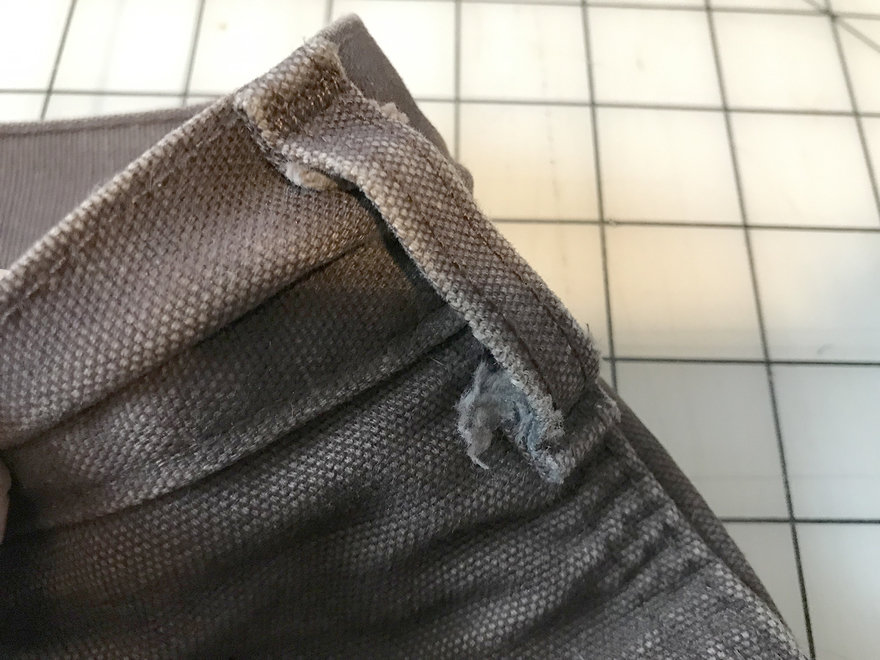 As the Double-Front moniker describes, these pants have a second layer of fabric covering the front of the legs, from the thigh down to the shins. I tend to kneel on the floor or the ground frequently, and these double-fronts have eliminated the biggest wear point on any work pants I owned previously, where the knees always disintegrated first. 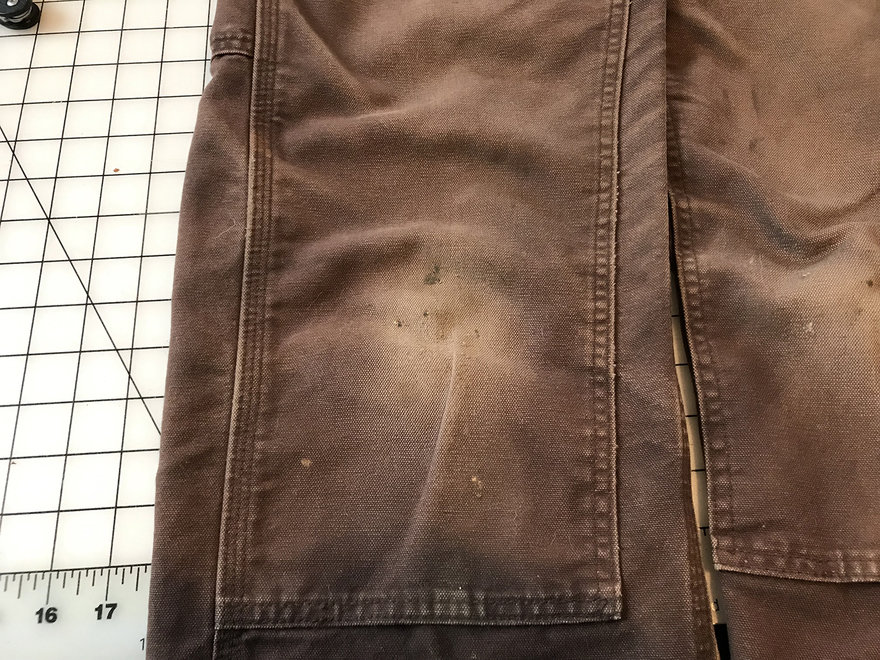 Even the outer layer of the knees show remarkably little wear, and only the smallest of punctures. 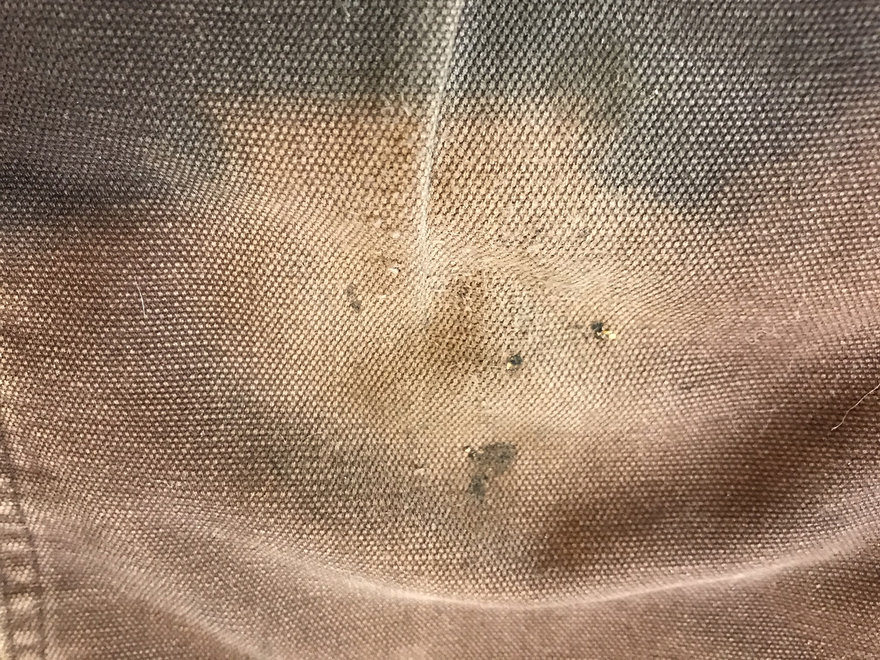 A bonus of the double-front that I never use: Kneepads can be slid behind the top layer, through an unstitched aperture at the bottom.

The downside of the double-fronts: These are riveted on, for strength. Those rivets thus create a tension point on the underlying layer of fabric. In other words, while the part of the pants that’s been riveted on have not failed, the part they’re riveted to, have. So, a trade-off. 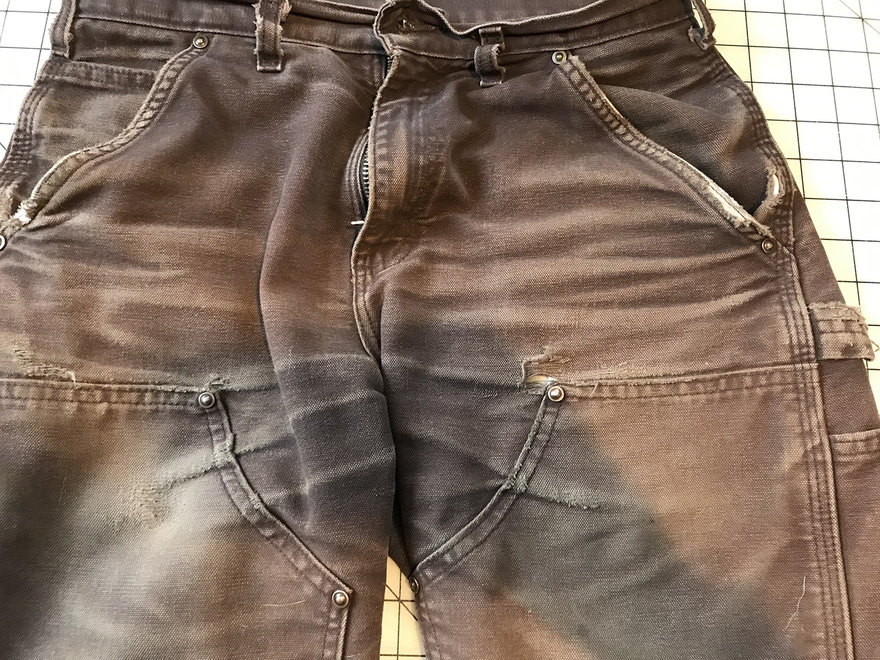 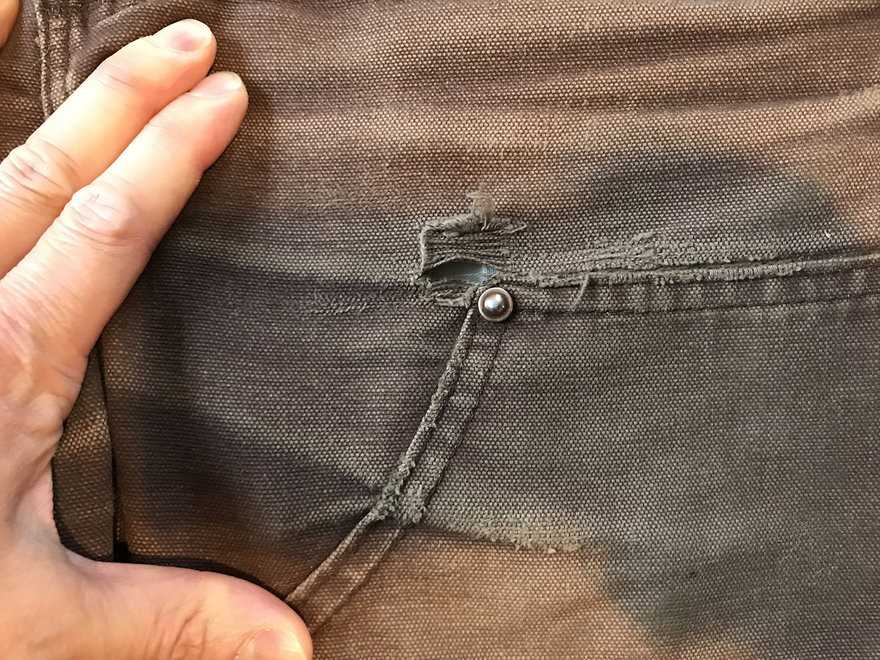 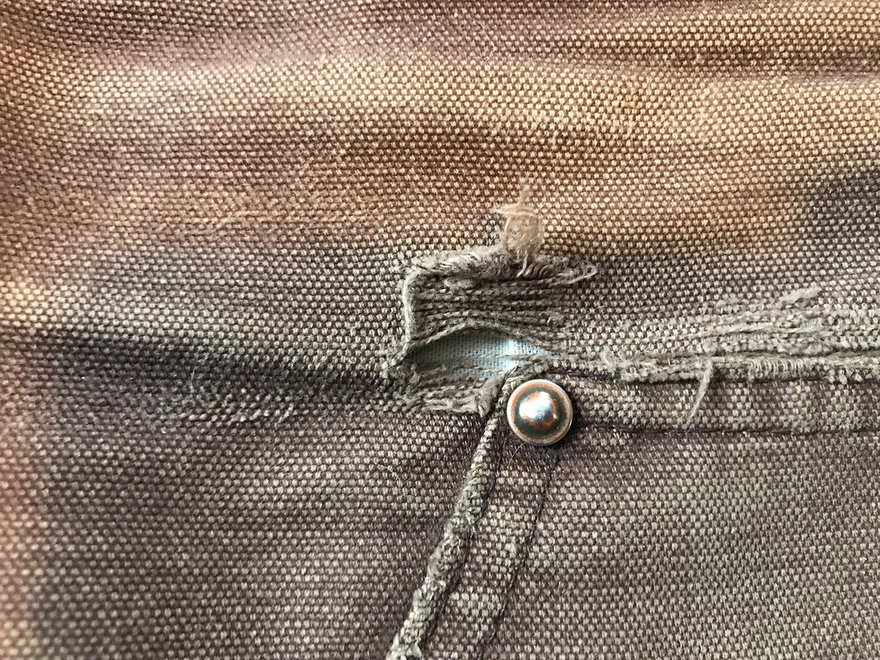 The hammer loop on the left leg has taken a terrible beating (though it has not failed). Interestingly, I estimate I’ve actually carried a hammer here less than a dozen times. So all of this wear appears to be from the mere friction of sitting or rubbing against things. 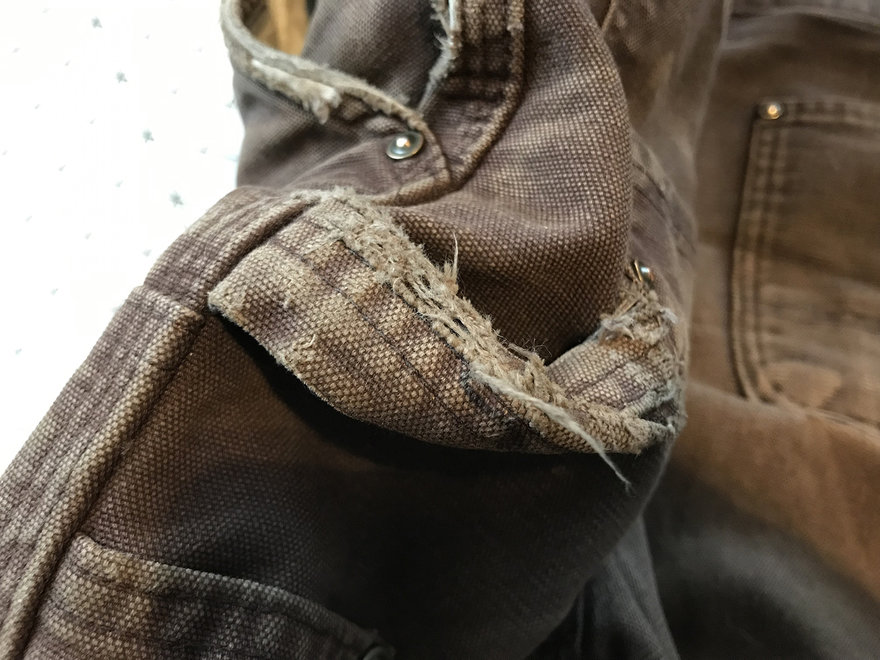 One failure point that’s my fault is on the insides of the ankles, down by the hem. There are holes here on both sides. Prior to me hemming these pants (you can see the black thread I used in the photos), I rolled the too-long legs up, and the bottom of the rolled portion would occasionally contact the ground. Thus the simple act of walking wore them through. 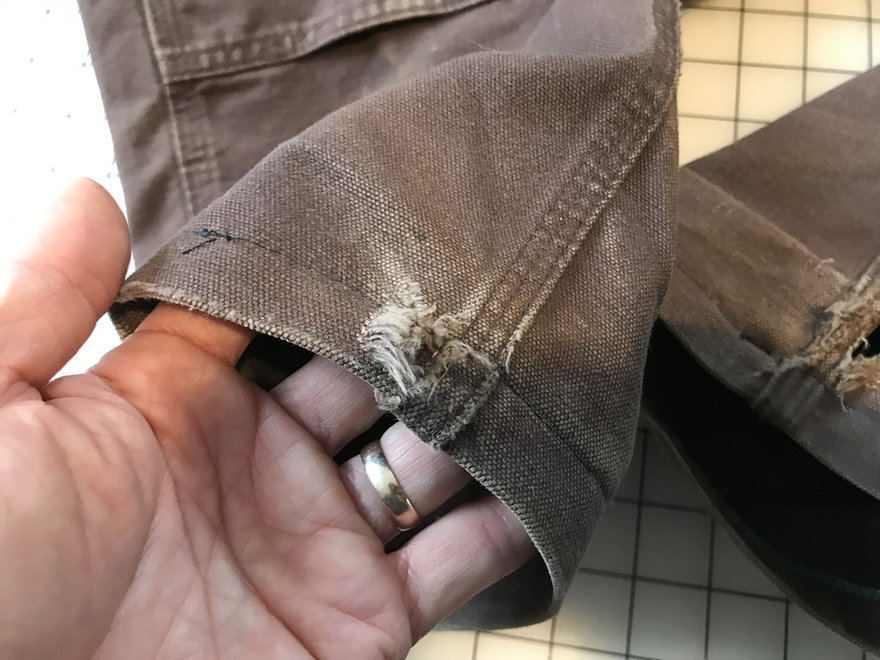 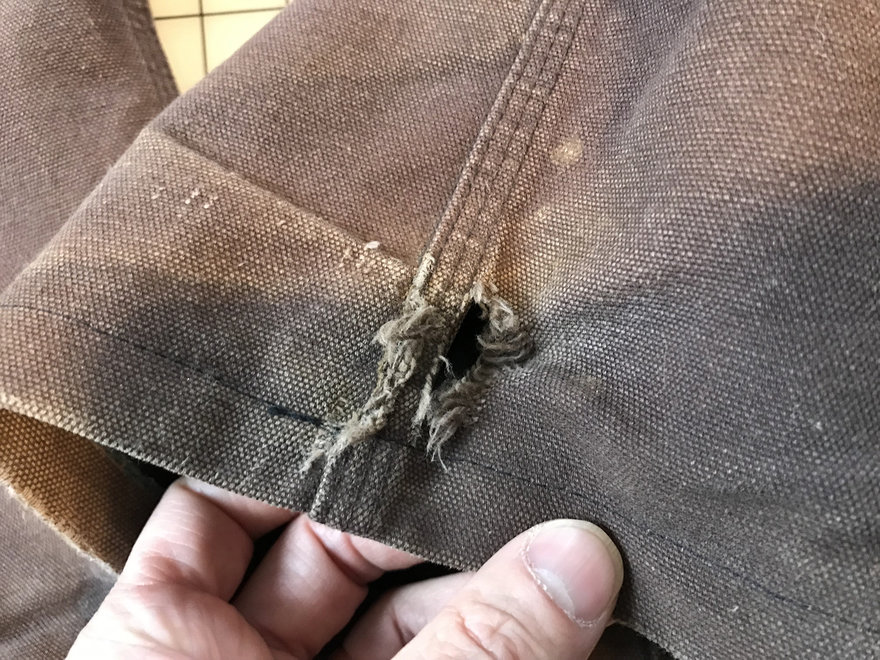 Given that these pants don’t look that bad, you may be wondering why I’m retiring them. It’s because the ass has started to tear beneath the pocket. Yesterday my wife pointed out that you could see my underwear through them. 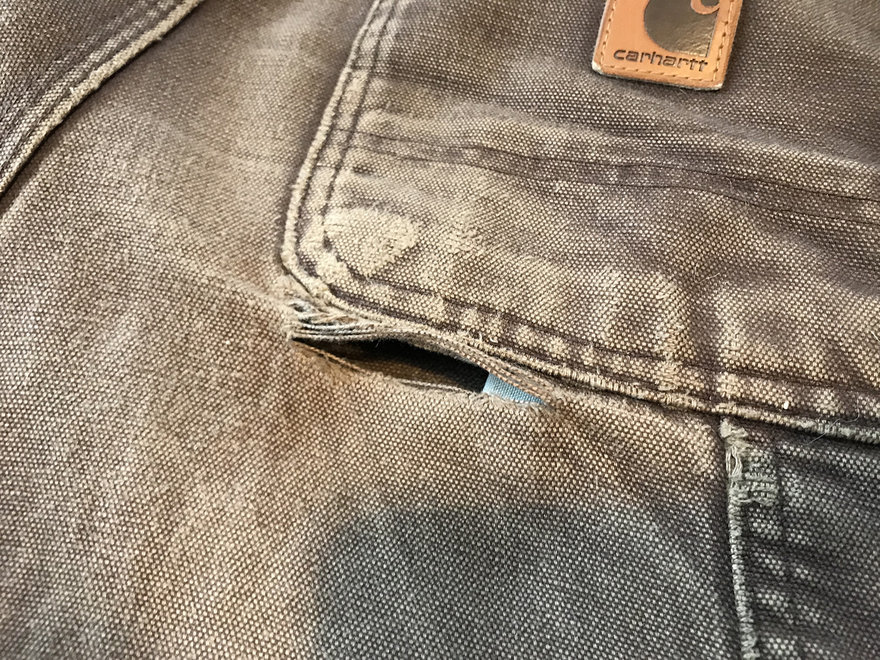 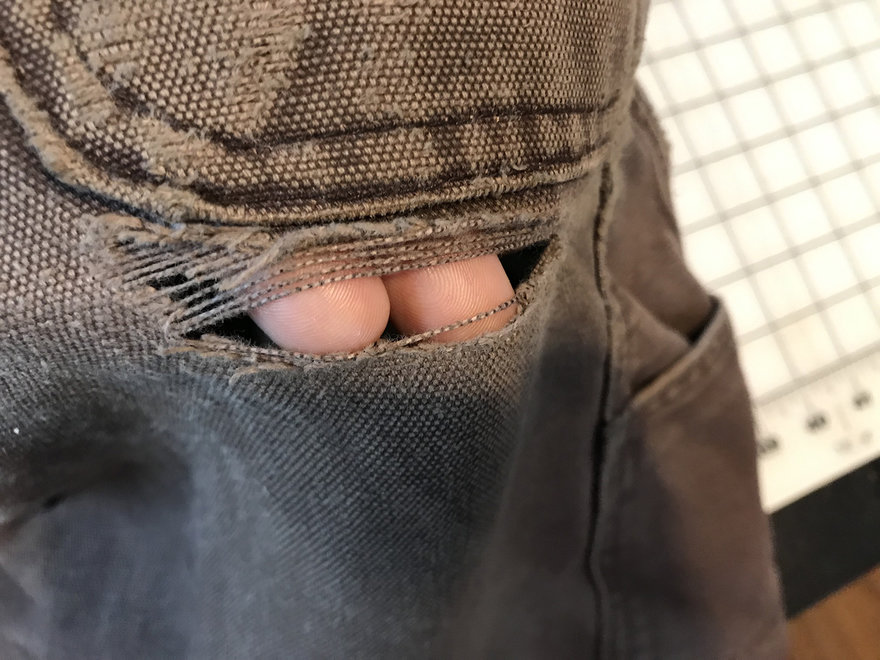 I won’t throw these out, but will save them for really dirty work. I’ll rotate in a fresh pair for daily wear. They’ll disintegrate faster now that I live on a farm, but I estimate I’ll get at least another 4-10 years out of the remaining three pairs I own.

I suppose these pants could be buttressed at the wear points with more durable materials, but that would of course raise the price. As it stands I consider these pants a good value. I paid $54.99 for the first pair through Carhartt’s website in February 2015. (They now charge $49.99.) I subsequently bought three pairs of them for $39.95 on Sierra Trading and will now rotate in the first. While I hate the idea that all clothing is disposable, I feel these pants led a reasonably long and useful life.

What’s your favorite/longest-lasting workwear? In particular I’m curious if any of you have a good shirt or jacket that allows full freedom of motion, yet is reasonably durable.