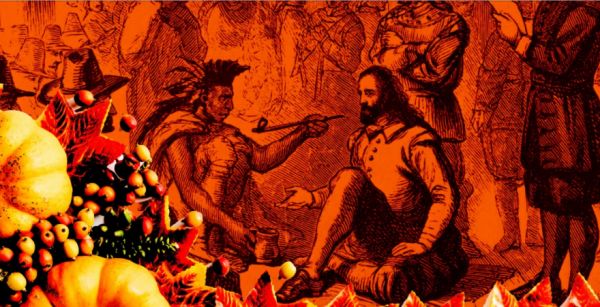 Many Americans spent the month of November during elementary school learning about the first Thanksgiving in 1621, when the Pilgrims feasted for three days with the Wampanoag in celebration of successful harvest. But it wasn’t the first such feast of thanks the Pilgrims experienced, since such holidays were held in Europe, too, to celebrate the harvest, or more often to celebrate a victory in battle. Earlier settlers in Virginia had those celebrations, too, usually after a massacre of the locals.

David Silverman lays down the reality of the Wampanoag and Pilgrim alliance in his seminal book This Land Is Their Land: The Wampanoag Indians, Plymouth Colony, and the Troubled History of Thanksgiving. In the book, Silverman details why the Wampanoag Massasoit (a sort of diplomatic leader) named Ousamequin helped the Pilgrims even though they had spent their first year robbing graves and squatting in emptied Wampanoag houses. In short, Ousamequin vowed to protect and help the 50-odd pilgrims because his people simply needed the numbers. The Narragansetts, a rival for land and resources, had not fallen victim to the spread of European diseases and they were willing to fight for land to plant their crops to feed their people.

This all leads up to the first “rejoicing” that took place in the fall of 1621. Back then, a “rejoicing” was a party. For three days (like the fest back in Holland), people would feast, run shooting drills, compete in feats of strength, and so on — kind of like a proto county fair. The Wampanoag — who had promised military protection to the Pilgrims — heard all the shooting, assumed they were under attack, and sent over 90 of their soldiers with Ousamequin at the lead. After a tense moment and realizing the pilgrims were actually partying, the Wampanoag ended up staying the three days and partying too.

By all accounts, there were no Pilgrims holding out their hands and inviting the Wampanoag to their table in “thanks.” It was mostly a misunderstanding that led to a little comingling. Almost inexplicably, though, this one-off event that few ever thought about again until the 1890s ended up being central to our ideas of Thanksgiving today.

Another strange fact that belies what we learned in school is that it took another 200 years for the Pilgrims’ feast to be pinpointed as the “first Thanksgiving.” The Puritans, a completely different group of settlers, later held their own feasts of gratitude. The Founding Fathers and other presidents occasionally declared a Thanksgiving holiday for one reason or another -often as a victory celebration after a battle- but did not tie the festivities to the 1621 feast until much later. And a lot of the traditions we keep today weren’t introduced until the 20th century. Read a history of Thanksgiving at Uproxx.