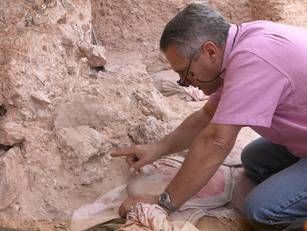 While there have been quite a few different human species, scientists believed for a long time that Homo sapiens originated in Africa around 200,000 years ago. Our oldest known fossil was a 160,000-year-old skull found in Ethiopia in 2003. So as far as we knew, the species arose in eastern Africa. But in 2017, paleontologist Jean-Jacques Hublin uncovered a skull in Morocco.

Since the 1980s, Hublin had studied peculiar fossils found in a cave in a desolate, mountainous region of Morocco in far-north Africa. The remains showed flat faces that looked remarkably like us — more so than our Neanderthal cousins. Their enlarged lower jaws and teeth along with elongated brain cases suggested they were of a primitive species that lived some 150,000 – 200,000 years ago. This age did not fit the pattern of previous discoveries, or the prevailing visions of how our story began.

As the oldest find at Omo-Kibosh was in Eastern Africa, where modern humans were believed to have began, it did not make sense for another human from the same time period to be dug up on another side of the continent.

So, when tests in 2017 dated Hublin’s discoveries in Morocco to 300,000 years ago, the paleontologist was left stunned. “It was a big wow,” he says. “I expected something older than 200,000, or I had hoped for something older, but not that old. It led us to completely reconsider the [story] of the evolution of our species.”

If a much older Homo sapiens skull came from northwest Africa, does that mean that modern humans did not originate in Ethiopia? Not necessarily. To complicate things further, a mitochondrial DNA study found the oldest human lineage in Namibia and South Africa, on the southernmost end of the continent. Read how both a wealth and dearth of evidence adds to the confusion, and what scientists think may have happened to produce modern humans at Discover magazine. -via Strange Company

Rating Where Was the Birthplace of Modern Humans? is 5.0 / 5 Votes: 4
Please wait...
Loading...
Related articles