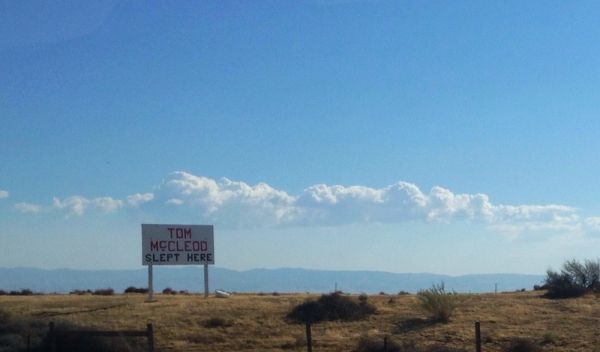 This sign, simply saying “Tom McCleod Slept Here,” appears on Interest 5 near Bakersfield in California. There are no buildings nearby, and no people to ask about it. It’s been there since at least 2009, when it was captured on Google Street View. People have written about the sign, but everyone has the same question. Who is Tom McCleod? SFGate looked into the mystery, and found an urban legend with no evidence to support it -which may have been made up on the spot. They also found four men named Tom McCleod. The four Toms had heard about the sign, and have seen it, but none ever slept near that patch of highway.

The fourth Tom McCleod they got hold of lives in Texas, and provided about the only intriguing piece of information they ever got.

While he’s familiar with the sign on I-5, living on the border of Texas and Arkansas means he’s seen stretches of road that few Californians have driven.

And “Tom McCleod slept here” signs are in Texas and Arkansas, too, he says. Louisiana and Mississippi, as well.

But he has no idea who the guy is.

From that information, I have to believe that Tom McCleod is a sign maker. Or the pseudonym of a sign maker. Is this a “social experiment” or some kind of art? Could it possibly be advertising? It might just be a prank, one that others have emulated in other parts of the country. Read about the sign and the search for Tom McCleod at SFGate. -via Strange Company