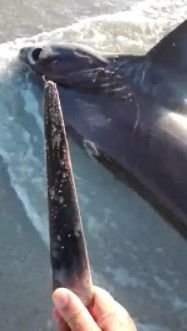 When this corpse of a thresher shark was found washed up onshore, it didn’t take researchers that long to figure out the cause of the shark’s death, as a “sword” was found sticking out of its body. It was clear enough that a swordfish was this shark’s killer, but it is still unclear why it stabbed the shark. According to the researchers, it was possible that, at that time, the two ocean predators were competing for prey.

“The most likely scenario is that both species were hunting on a school of fish or on squids in the deep,” said study lead researcher Patrick Jambura, a doctoral student in the Department of Paleontology at the University of Vienna.

It’s also possible the two ocean predators were fighting over territory, or that the swordfish accidentally stabbed the thresher shark and left nearly 12 inches (30.1 centimeters) of its “sword” in the victim, he said.

News of the fight’s deadly aftermath spread when the shark’s body washed up on the Mediterranean coast of Libya, near the town of Brega in April 2020. A local citizen scientist group learned about photos and video taken of the 14.5-foot-long (4.5 meters) dead shark, and after seeing the evidence “I was just stunned for a few moments,” Jambura told Live Science in an email. Swordfish (Xiphias gladius) are known to defend themselves against blue sharks (Prionace glauca) and mako sharks (Isurus oxyrinchus), as these sharks prey on swordfish.

However, Jambura states that the thresher shark preys upon small food, and it may not have been a threat to the swordfish. So why did the latter stab it? It is still quite puzzling.

More details about this story over at Live Science.