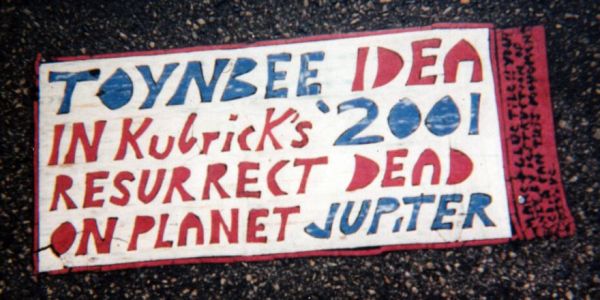 Some time in the 1980s, an unknown artist started leaving tiles embedded in asphalt roads. These tiles were later determined to be made of mostly linoleum and tar, and they were first left in Philadelphia, then in cities across the US, and in four South American cities. There are hundreds of these Toynbee Tiles, as they are called, with cryptic word jumbles on them like the one you see above. The words are thought to have derived mainly from the works of historian Arnold Toynbee and from the movie 2001: A Space Odyssey. What do they mean? And who put them there?

We don’t know when the tiles were laid, if they are still being made, or how many there are that haven’t been discovered. As for the artist, there have been investigations over the years, and a full-length documentary has been made about the search. There are a lot of clues, but no definitive answer yet. Read about the Toynbee Tiles and the mystery that surrounds them at Messy Nessy Chic.