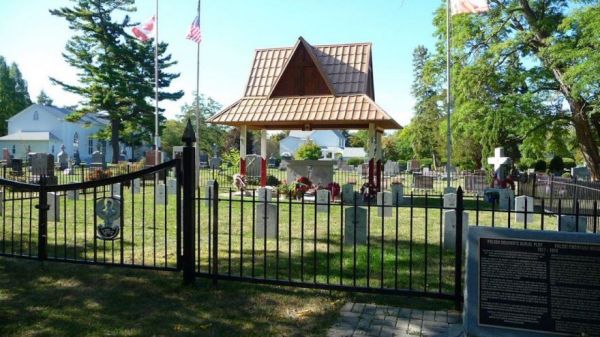 Niagara-on-the-Lake, Ontario, had two military camps training soldiers for World War I: one was for Canadian draftees, and the other, Camp Kościuszko, was made up of Polish refugees who wanted to fight to liberate their homeland. In 1917, the arrival of the Polish forces frightened townspeople, but the European soldiers soon made friends and were welcomed into the community. Then in September of 1918, the men began to fall ill.

Although some historians argue that Quebec beat Niagara to the unfortunate distinction by a couple of days, local experts are certain: Camp Kościuszko had become the site of Canada’s first Spanish Flu outbreak.

Merritt says the virus was likely imported along with trainees from the United States, where there were large outbreaks. Once inside the crowded camp, it spread quickly. Despite efforts to separate the sick from the healthy, men soon started to die. Over the course of two surges of infection — the second of which happened in January 1919 — 31 Polish trainees and two Canadian officers died.

“The real tragedy, of course, is that these men were all volunteers,” Merritt says. “They had all volunteered to fight for the repatriation of their homeland, Poland, which had been occupied by other countries for 125 years. These men were dying almost as martyrs.”

The women of Niagara-on-the-Lake sprang into action to tend to the sick soldiers, particularly Elizabeth Ascher, who they called their “Angel of Mercy.” The Spanish Flu outbreak left a mark that is felt 102 years later in the town, and commemorations are still held to honor the Polish soldiers who died in service there. Read about the small town and the soldiers they still honor at TVO. -via Nag on the Lake

Rating Why are These Graves in Niagara-on-the-Lake on Sovereign Polish Land? is 5.0 / 5 Votes: 2
Please wait...
Loading...
Related articles