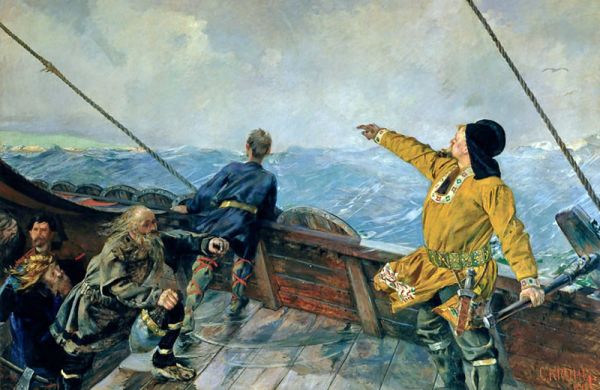 In the 10th century, Vikings sailed from Norway to Greenland, but the ancient accounts of the voyage don’t give us much technical information about how they found their way. That’s a long trip if you don’t have navigational aids.

Navigation, however, was no easy task. There was no map or chart to rely on, no sextant for celestial navigation, and no magnetic compass to help with dead reckoning. (That was how Columbus did it 500 years later.) The Norse sagas offer a few hints about how Vikings rowed and sailed along—but they are vague and incomplete. Close to shore, Viking mariners relied on coastal landmarks, such as how the sun seemed to hang between two particular mountains. Out at sea, when they were lucky, they had the sun and the predictable movements of migratory birds. But the sagas shed little light on how they managed during cloudy or stormy days, common occurrences in the North Atlantic.

One theory is that they used “sunstones,” or crystals, which can reveal the position of the sun on a cloudy day if you know how to use one. But the evidence for this is scant. Read about the use of crystals for ocean navigation at Atlas Obscura.

Rating Why Can’t We Figure Out How the Vikings Crossed the Atlantic? is 5.0 / 5 Votes: 1
Please wait...
Loading...
Related articles