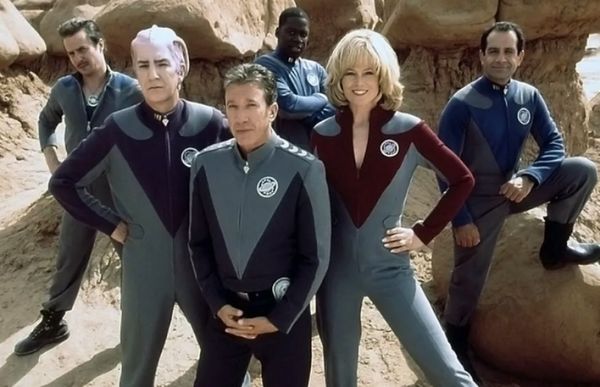 The 1999 film Galaxy Quest had a lot going for it: comedy, action, science fiction, and a stellar cast. We know from the recent Honest Trailer that it’s not just you who thinks it’s an excellent movie. So why wasn’t it a big hit? The movie opened in seventh place over the Christmas holiday twenty years ago. Producer Mark Johnson and star Sigourney Weaver explain how the studio pulled the film out from under them.

“DreamWorks didn’t know what to make of the film,” Johnson says. “I wouldn’t go so far as to say they didn’t believe in it, but it wasn’t what they felt like they ordered.” For Weaver, she’d had a similar feeling for much longer.

“To me, they didn’t seem particularly interested in what we were doing, which gave us more freedom during the shoot,” Weaver says. “But at the last minute DreamWorks decided it needed a movie to go up against Stuart Little, the mouse movie. So, they chose this one and started making cuts to the film.”

Weaver notes that along with an F-bomb she shot, several of Rickman’s scenes were cut because they were a little kinky for a family audience.

“That all had to go so they could make it a kids movie, which is such a shame,” Weaver says. “I would buy Galaxy Quest with the cut scenes added back just to see Alan doing some of those scenes. This was a very sophisticated picture, and they could have had a wider audience with the more adult-take on the Star Trek of it.”

Now that Galaxy Quest is 20 years old, Hollywood Reporter tells the story of how the movie came about and tracks down what went wrong with its marketing, straight from those who were there. -via Metafilter