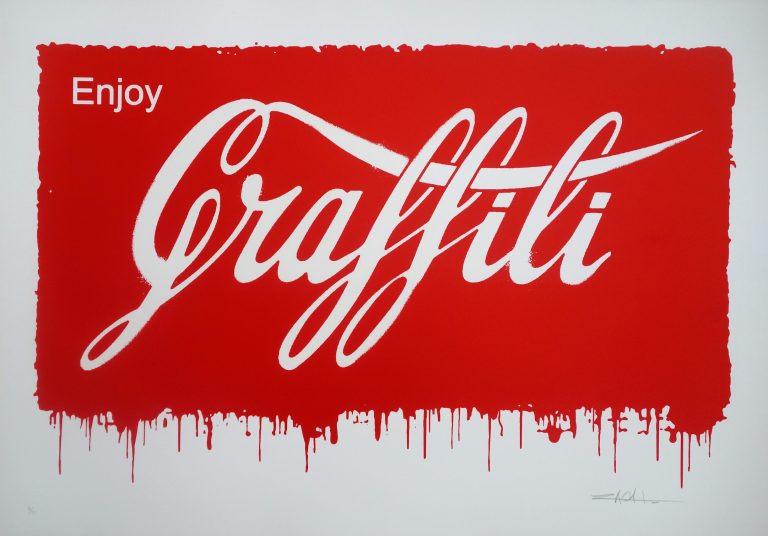 Do you view graffiti as art? No? Before you dismiss it as random scrawling by disenfranchised souls striking out against civilization, pause to think about the work of street artists who paint on the side of buildings like Banksy, Alexandre Farto (aka Vhils), or Tavar Zawacki? Their work is far from whimsical or profane. Street art catches us by surprise when we first encounter it and may touch us deeply

One working definition to distinguish between rubbish and art is if the work inspires you in some way. When art has a purpose other than to express aesthetic delight then it serves not to explain the world as we know it but to raise eyebrows. It asks questions rather than offers answers. Using this simple definition, it’s hard to belittle Banksy’s works across Manhattan as mere graffiti. They make you stop and think, reflect, smile, shake your head in wonder and disbelief. In fact, you might be more accurate in describing him as an artist who uses the fixtures of an urban landscape as his canvas.

Ironically, artists of all kinds from painters to authors to composers have only been recognized for their talents after they had died. During life they may have been seen as too edgy, controversial or even crazy but time has shown it was actually inspired talent.

The Story of Impressionism

Since art is an umbrella term for all forms of creative self-expression, all statements about it are clouded in ambiguity and vague abstractions, so let’s confine our discussion to painting, and to one style of painting, like Impressionism. This focus will help to illustrate the idea of how an artistic style once considered absurd can morph into something people view with delight.

Today, historical autographs for sale like Claude Monet’s letter relating to one of his most famous painting, The White Water Lilies, which currently hangs in Moscow’s Pushkin Museum, is considered a prized possession by an aesthete. However, when Monet first spawned Impressionism from the well-springs of his creative imagination, it was not well- received. It was widely rejected in 1860 since it did not conform to the standards established by the government-approved exhibitions, the salons. The academic art institutions shunned it because it did not have the details and the finish which was considered essential for good art. In other words, the establishment and the influential voices of the day considered it something of an anathema on the art world.

His idea captured the imagination of other rebellious artists of his time, and the works of Édouard Manet, Edgar Degas, Pierre-Auguste Renoir, Camille Pissarro, and Alfred Sisley all contributed to the evolution of this modern movement in art painting. Impressionism created a new philosophy of art: it postulated that a scene that impressed the eye of the observer for a fleeting moment was a thing of fragile beauty that should be cherished.

So what makes art meaningful to both the artist and an observer?

While there are many possible reasons, perhaps as many as there are observers, here are 3 conjectures why we love art: