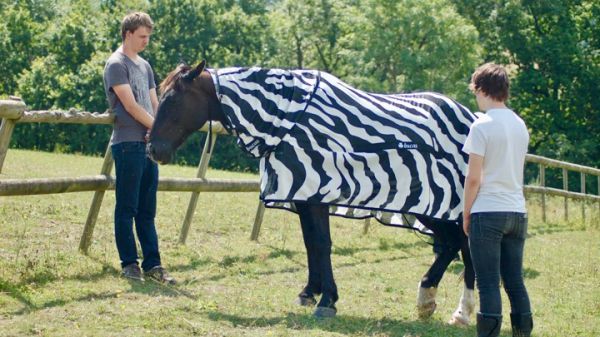 Why did the equines of the African savannah develop black and white stripes? Is it camouflage against predators, thermal regulation, or a defense against insects? A new study by UC Davis conservation biologist Tim Caro and his colleagues looked at the most promising reason: defense against tabanids, which we know as horse flies, that suck blood and can spread equine diseases. They observed a farm in England where horses and zebras lived side-by-side.

By watching and filming the stable’s horses and zebras, the team confirmed that horseflies were much worse at alighting on the latter. The flies had no problem finding the zebras or approaching them, but couldn’t stick the landing. “You get a quarter as many landings,” Caro said. “The flies just can’t probe for a blood meal with the zebras.”

The team found the same trend when they put striped coats on the horses. Cloaked in stripes, the very same animals suddenly became more resistant to flies, except on their uncovered heads. And uniformly colored coats had no effect; the stripes, specifically, befuddled the flies.

We still don’t know the exact mechanism that causes stripes to confuse flies, but scientists have some possibilities, which sets up the team to design further (and more difficult) experiments. But these results should boost the sale of zebra-striped horse coats. Maybe we can re-structure the initial question as “Why don’t horses have stripes?” Read more about the research at the Atlantic. -via Metafilter