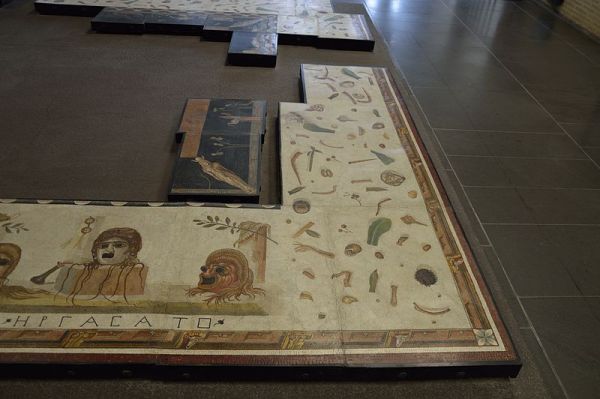 The title of this article made me laugh, because it brings up a picture of someone with trash on their floor trying to convince a roommate or visitor that it’s the latest style in home decorating instead of an aversion to cleaning up. And it hits home to anyone who has ever insisted on a woodgrain or cobblestone motif in vinyl flooring because it’s harder to see dirt on it. But a floor on display at the Profane Museum at the Vatican is a finely-crafted mosaic that once graced the home of a wealthy Roman. It displays animal bones and feet, shellfish, bits of salad, and other food scraps, as if they were dropped there.

Mosaics like this one formed the floors of triclinia, dining rooms in ancient Rome where party guests lounged on couches, picking at delicacies. This one was unearthed among the remains of a villa on Aventine Hill, and even now it emanates some of the atmosphere of one of those long, dim, boozy Roman banquets. The scraps of food cast long, erratic shadows in different directions, as if lit by the dancing flicker of oil lamps, and even the little mouse, nibbling on a nut in the corner, carries a white glimmer of reflected lamplight in its eye.

This motif is a surprisingly common one, enough so that it has its own name: asarotos oikos, or “unswept room” in Greek. Although Greek artists made the first “unswept room” mosaics, we have only later Roman copies, which were constructed during a craze for Greek culture. But why would an elite Roman go to such effort and expense to make their dining room floor look like it was covered in trash?

The obvious guess is camouflage, so when guests got inebriated and dropped their food, they could pretend it was supposed to look that way. But the real answers are more interesting, if less comical. Find out what those reasons were at Atlas Obscura.